This Huge 8.3% Dividend Is Hiding in Plain Sight

With the recent panic, many people fear there’s just no good way to make good money in stocks anymore.

This is really short sighted!

But to make the most profits in a market like this, you simply must choke back your natural instinct to flee when stocks are a sea of red.

To see how being greedy when others are frightened pays off, let me show you a classic example: a fund that holds the very investments that set off the financial meltdown back in 2008. And you’ll probably be shocked to hear that I see them as a screaming buy today.

Let me explain each part.

A CEF is kind of like an ETF or a mutual fund in that it pools cash from investors and uses that cash to buy into a class of assets. Investors can buy or sell shares of the CEF through any retail brokerage, selling when the fund rises in value and buying when it’s lower.

The key difference is that the CEF doesn’t issue more shares to new investors once it goes through an IPO—hence it’s “closed.” This stops the fund from getting too big and straying from its mandate while also ensuring owners’ stake in the fund isn’t diluted.

PDI is a CEF that has specialized in mortgage-backed securities, or MBS’s, since its debut in 2012. If you’ve read or seen The Big Short, you might recognize the term: these are the derivatives that were mismanaged so badly that they caused the 2007–09 financial crisis.

Scared yet? I wouldn’t be surprised.

A lot of people were scared of this asset class in 2012, which is why PIMCO launched this fund. They knew there were massive profits to be made because of an overreaction to the crisis, which was by then over and done with. PIMCO also knew that only a few investors would recognize this opportunity, which is why they chose a small CEF instead of a massive mutual fund or ETF.

Here’s how PDI has done since then: 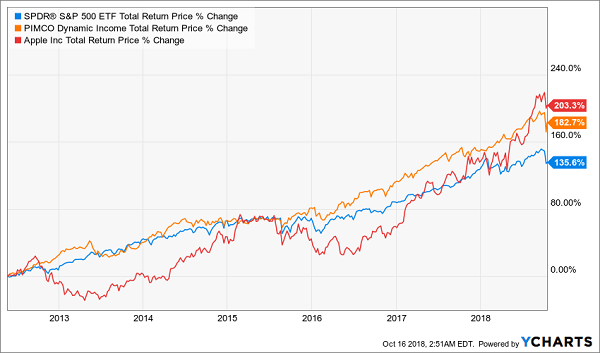 The reason for its recent slump has more to do with market volatility than anything PDI is doing wrong. The fund’s portfolio is up 9.5% from a year ago, including dividends, but because CEFs trade on the market for a different price than their NAV returns (or the value of their portfolio if liquidated today), first-level investors have sold off the fund.

Look at the trend in the fund’s NAV versus its price over the last 3 months: 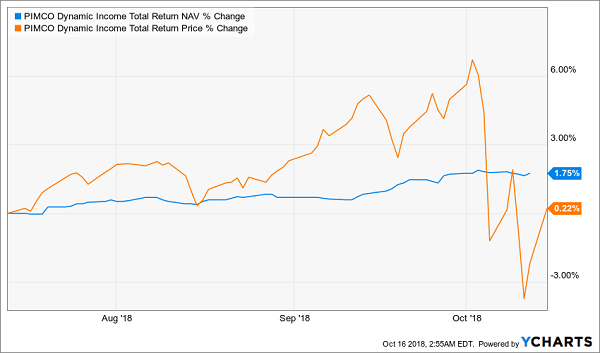 The sudden drop in PDI’s price, despite the steady rise in its portfolio value, tells us two things: first, it says PDI’s investors have panicked and suddenly sold this fund after overbuying it in prior months. Second, it says that buying a CEF at the right time can dramatically amplify gains.

To see what a huge difference timing can make, let’s look at two scenarios. Imagine one person bought PDI on April 11, 2018. He or she would have booked a respectable 5.1% return in just 6 months—a smidgen higher than the S&P 500’s 4.8% gain:

A Decent Profit in a Short Time 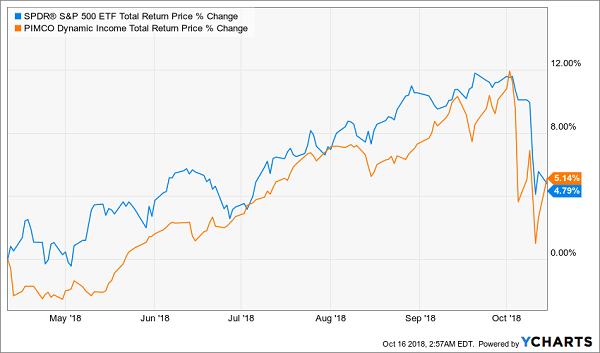 What a Difference 2 Days Makes! 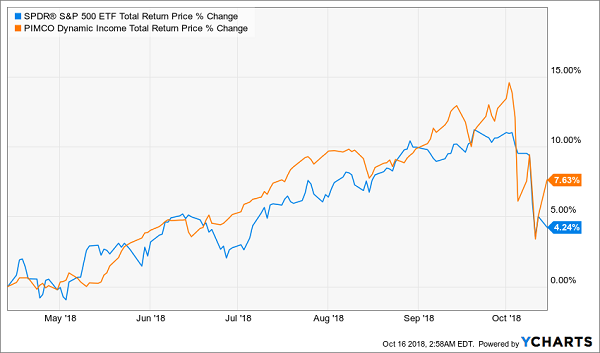 But how could that second investor know to wait 2 days? Again, the beauty of CEFs is that it’s not difficult to time purchases—you just have to look at one metric: the price and NAV return ratio. 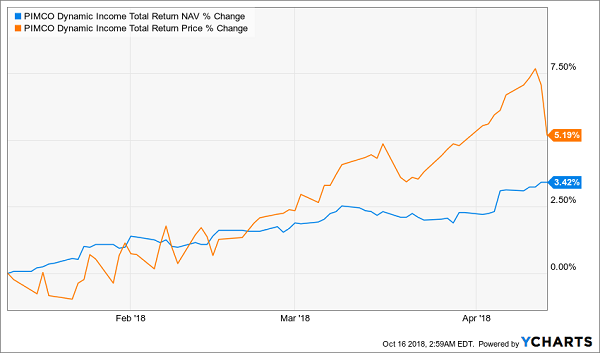 Note how, from the start of 2018, PDI’s more volatile price returns were staying pretty close to the fund’s NAV until March, when the price trend went far ahead of the NAV trend, causing two big dips in the price in mid-March and then again in mid-April?

Those were entry points to boost returns—which brings me back to this chart:

See how the price has suddenly dropped after a big run-up? As in April, PDI is giving savvy investors a shot at outsized gains by jumping in now, when the market has oversold it.

If you have dark memories of 2008, you may be wondering why you would want to bother with an asset class as risky as MBS’s at all.

But 2008 is the precise reason why, because the next crisis never looks like the last one.

And thanks to 2008, greater regulation and stricter rules have made MBS’s less risky than ever—while strict banking practices also mean mortgage defaults have plummeted—making real estate derivatives safer than they’ve been in a decade:

Mortgage Defaults Fall to the Floor 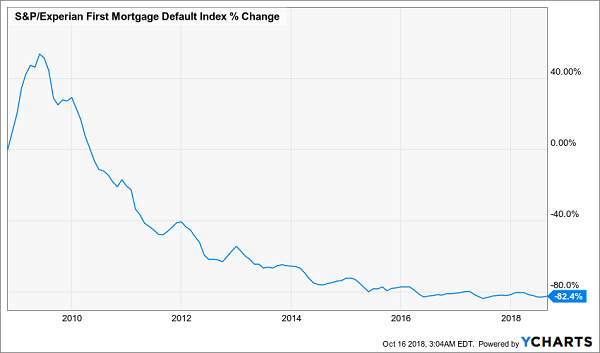 And all of that is still not priced into MBS’s!

Many of these derivatives are trading far below their intrinsic value, which is why PIMCO, one of the world’s largest and most experienced bond investors, can identify the underpriced ones and buy them at a deep discount, then pass those profits to investors.

If that wasn’t enough to convince you to consider PDI, let me mention the dividend: PDI currently yields 8.3%, and its dividend has risen 24.6% since its IPO.

With a massive yield, market outperformance, a rising income stream and a rare but clear buy signal, PDI is a serious income producer that demands attention.

The Perfect Pairing With PDI: 8.4% Dividends and Fast 20%+ Gains

Here’s something else I need to tell you: the recent sell off just knocked one of my top 4 CEF buys to an amazing 14% discount to net asset value!

I mention this now because this off-the-radar buy pairs perfectly with PDI, since it diversifies you into steady high-yield large caps like Ventas (VTR) and Enbridge (ENB).

And thanks to its incredible discount, we’re getting these sturdy income plays for just 86 cents on the dollar!

This bargain fund then takes these stocks’ massive dividends (plus the upside its veteran managers squeeze from its rock-solid portfolio) and hands them to you in the form of a massive 8.4% dividend paid monthly!

This stealth fund is the perfect investment for today’s churned-up markets—especially if you’re just a little twitchy about going near MBS’s. And thanks to this CEF’s huge discount, my team and I have it pegged for easy 20% price upside in 2019.

That’s on top of its incredible 8.4% CASH dividend!

This is the ultimate “sleep well at night” buy, and I can’t wait to show it to you. Click here and I’ll give you full details—name, buy-under price, ticker and more—on this fund and 3 other ridiculously cheap high yielders that should be on your buy list now. Don’t miss out!