The 3 Best Big Dividends (Up to 9.5%) for This Uncertain Market

Dividends or growth? Why choose?

There’s a widespread belief that stocks and funds can deliver red-hot capital gains or substantial income, but not both. Fortunately for us that’s not true.

It is possible to collect big dividends and capital appreciation. I’m going to show you how to safely collect 32% in total returns in less than a year from a big dividend payer. And while this “easy dividend money” has been made, we’ll discuss three more stocks yielding around 8%-9% that can deliver 20%+ in dividends and upside over the next twelve months..

Income investors like you and me should focus on total returns, which are made up of dividends and price appreciation. The latter, price gains, are driven by a combination of:

The first two drivers are what sent AllianceBernstein (AB), which I highlighted back on Dec. 16, 2017, to market-clobbering returns ever since. I pointed out some optimistic analyst outlooks for the stock, as well as widening operating margins and an unorthodox but upward-trending distribution. Sure enough, AllianceBernstein proceeded to churn out 35% in adjusted profit growth over the next three quarters, then returned every cent of that back to investors.

The results? Total returns of 32%. That’s 22% in growth, and another 10% in dividends, for a total return that has quintupled the S&P 500 over the same time frame!

AB Delivers 10% in Dividends Plus 22% Upside 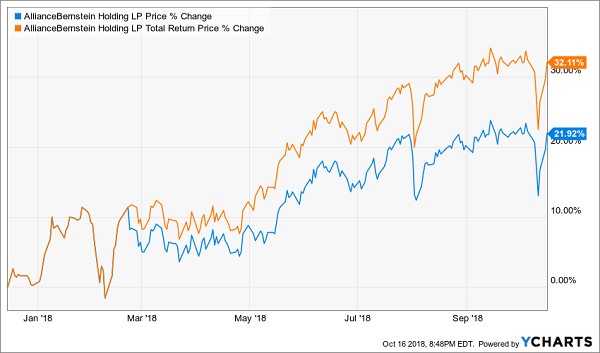 Now, let’s look at some more high-yield stocks of about 8%-9% that can deliver similar upside over the next year.

Senior Housing Properties Trust (SNH) is a Baby Boomer play that’s pretty much exactly what you would expect from its name, but also more. Of its 443 properties across 42 states and Washington, D.C., 50% are senior living communities. However, SNH also boasts life science centers (23%), medical office buildings (21%), wellness centers (3%) and skilled nursing facilities (3%) – other types of businesses that should flourish with the aging of the Boomers.

But there’s another reason to like Senior Housing Properties’ business right now, and that’s its focus on privately paying customers. In fact, the company boasts “limited government funding exposure,” with 97% of its net operating income coming from private-pay properties. That looks like it could be increasingly important with Congress starting to beat the drums on “entitlement reform” (that’s politician-speak for reducing Medicare, Social Security, etc.)

The basic business case is there. What should give SNH an extra kick in the pants? For one, analysts are expecting an outsize year of profits in 2018 before it “pulls back” in 2019 – though still to levels about 34% higher than they were in 2017. Value should play a role, too. A pullback in real estate this year has swept up Senior Housing and brought it to a valuation of less than 11 times its TTM funds from operations. Tack on a nearly 10% dividend, and you’re looking at likely total returns of 20%-plus over the next year.

Mortgage REIT Starwood Property Trust (STWD) has a portfolio of more than $12 billion, primarily invested in first mortgage loans but with exposure to mezzanine loans, subordinated mortgages, commercial mortgage-backed securities (CMBS) and a few other investments.

But the thing I love most about Starwood is its one big imbalance.

Mortgage REITs historically have performed poorly when interest rates head higher. However, roughly 95% of Starwood’s portfolio is floating-rate in nature, and in fact the company expects to its cash flow to increase in a rising-rate environment. And what do we have right now?

The Federal Reserve has signaled that more rates are coming at least this year and next, and Starwood Property Trust is well-positioned to ride this wave higher. Its 9% dividend yield, meanwhile, will pad those returns.

Next up, I want to double down on one of the other picks I made last December – Sabra Health Care REIT (SBRA), which also has had a nice run since my call, tripling the total return of the S&P 500. 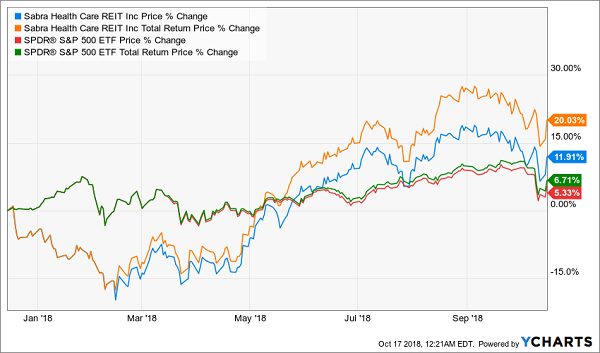 Sabra is similar to SNH in that it’s a Boomer play – 72% of the portfolio is skilled nursing/transitional care real estate, as well as 23% senior housing (89 properties leased, 24 managed) and the rest in “specialty hospitals and other.”

Sabra did hit some turbulence after a multibillion-dollar merger in 2017, as well as a prorated dividend, though it made good on that and even hiked the payout after that.

I like the three stocks I’ve outlined above, but I’m in love with a set of four new high-yield, total-return plays that my research has produced.

In fact, I haven’t been this excited about an income opportunity in years.

What if I told you that you could turn some of Wall Street’s most exciting, growth-oriented blue chips, such as Visa (V) and Google-parent Alphabet (GOOGL), into “double threat” holdings that deliver double-digit upside and 8%-plus dividends? Well, given that Visa pays less than 1% and Alphabet doesn’t deliver a single penny in income, you’d probably call me crazy …

… right until the moment you saw my new discovery: “Dividend Conversion Machines.”