U.S. Markets rebuffed negative headlines from around the globe this week, bouncing back from losses suffered earlier in March.

Boeing (BA) lost 11% combined over Monday and Tuesday, following a second tragic crash of its 737 MAX airplane that led to a global grounding of more than 300 of the company’s jets. The decline single-handedly accounted for a loss of more than 300 points on the Dow Jones Industrial Average in 48 hours.

The discussion if, when and how Brexit will proceed continues to play out across the pond, without a resolution. Theresa May lost a second vote in Parliament on Wednesday; and then the decision for the U.K.… Read more

That dip didn’t last long, did it?

The S&P 500 is back around 2,800, the Dow is back around 26,000, and stocks – which frankly were never really “cheap” even in the December doldrums – are back to being hilariously overpriced. And that’s a problem on two fronts.

How bad is it out there?

Here’s a look at the short-term, which shows valuations are clearly back to their pre-dip “normal.” 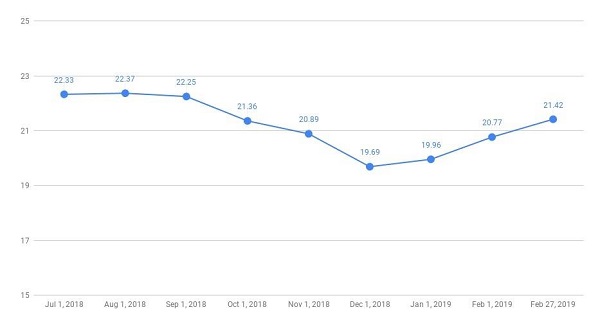