These 11% Dividends Have Crashed 43% (They’re Just Getting Started)

You may not know it, but big pension funds are pulling billions of dollars out of one sector, leaving behind a group of stocks these big players will never buy again.

That’s a clear signal that we need to avoid these stocks, too.

I’m talking about oil companies. In New Jersey, for example, legislators are trying to ban the state pension fund from fossil fuels. The state’s Fossil Fuel Divestment Bill has bipartisan support, mainly because oil has been a clear loser for investors. We can clearly see this when we look at the chart of the biggest oil major of them all: 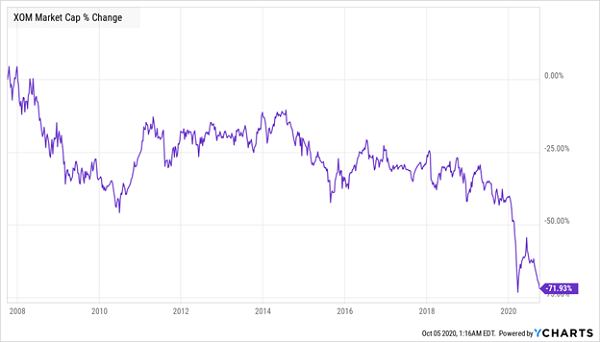 An S&P 500 index fund, as usual, won’t pay you enough income to retire. You have to buy the pricey basket and hope it’ll keep levitating higher. A purchase of the popular index today and you’ll barely squeeze out $18,000 in dividends by this time next year. That’s not much but it’s downright lavish compared with the $6,700 you’d eke out of a 10-year T-note.… Read more

What? I didn’t. Or I thought I didn’t. In reality, I did–by buying shares in not one but two master limited partnerships (MLPs).

One of them was Enterprise Products Partners (EPD) and while I can’t recall the other, I can vividly the annoyed look on my accountant’s face like it was yesterday.

Master limited partnerships (MLPs) are required to issue you a K-1 package at the end of the tax year. These are generally headaches for the person who does your taxes (whether it’s you, or a professional).

That year my accountant calmly but sternly asked me to stop buying MLPs in my personal portfolio.… Read more