Macro headlines drove the trading action this week. On Wednesday, the Bank of England lowered its 2019 growth forecast to 1.2%, which would represent the worst performance in a decade. The European Commission also cut its target for 2019 growth in the Eurozone on Thursday, to 1.3%.

Elsewhere, reports circulated this week that President Trump would meet with North Korea’s Kim Jong Un later this month. However, volatile trade talks with China took a turn for the worse and Trump said on Thursday he will not speak with President Xi before a looming deadline on March 1, for increased tariffs on Chinese imports.… Read more

This is an example of a bad almost-10% yield:

When a Bullish Chart is Bad 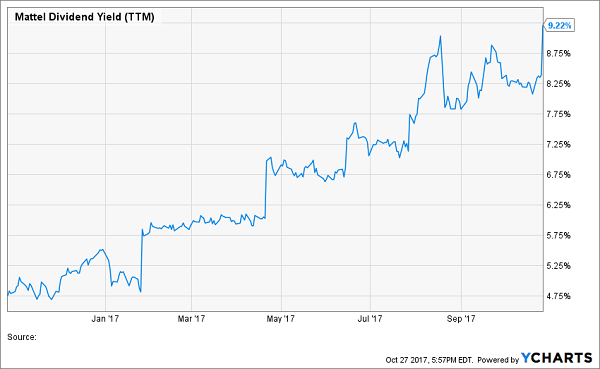 Mattel’s (MAT) yield was rising for the wrong reason – because its stock price was dropping faster than its payout. Going forward, that shouldn’t be a problem. The firm officially suspended its dividend on Friday.

I warned you that the toy maker was a dividend disaster waiting to happen. In June’s edition of our Dirty Dozen: 12 Dividend Stocks to Sell Now report, we discussed how falling profits were going to be a serious problem for the stock’s payout:

When Mattel last raised its dividend, from 36 cents to 38 cents quarterly at the beginning of 2014, few people batted an eye.

5 Dividends I’d Pay to Short (and Probably Will)

Let’s talk about five big payouts that are so flimsy, they’re just asking for the ultimate sign of dividend disrespect:

Paying money to short them.

It’s one thing to turn down a decent yield in today’s 2% world. It’s another to be willing to pay the dividend in order to bet against the stock!

Yet here are five firms with archaic business models (some are so-2015) that their cash flow streams will soon dry up. And when the cash evaporates, so will the dividend.

Which is why I may short some or all of these shares in the weeks ahead after this piece publishes.…
Read more

3 “Dirty” Dividends, and a Secure 5% Yield to Buy Instead

Don’t take any dividends for granted today. Business disruption is accelerating as entire industries are being eaten alive.

And soon, they might team up to offer more same day deliveries – and make more rivals obsolete!

These types of disturbances have added a new layer to contrarian investing. Before, it was as simple as buying stocks when they were out-of-favor and holding them until they became back in vogue. The “Dogs of the Dow” strategy, for example, usually beat the market by banking the highest blue chip dividend yields – a sign that the tide was ready to turn back in the dogs favor.…
Read more

I keep saying it because it’s true and critical to your retirement wellbeing  (or lack thereof)  – don’t take any dividends for granted today!

In a minute I’ll outline a 3-step “dividend disaster” test that you can quickly run on the stocks you own. I want to make sure you don’t hold the next Mattel (MAT) simply because “its yield looked good” or “so-and-so guru recommended it.” 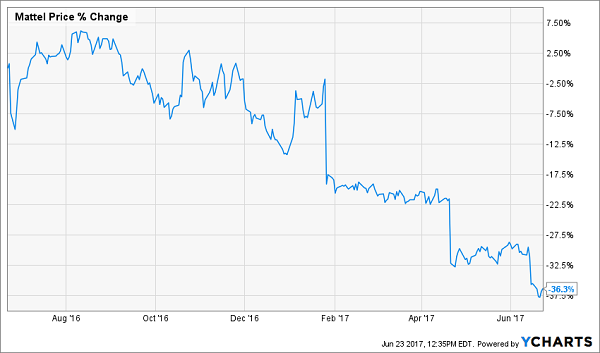 Our Contrarian Income Report portfolio was, yet again, unique in our handling of this ticking toy bomb.…
Read more

5 Dividends That Will Disappear in 5 Years

A high dividend yield can be the ultimate retirement holding. Or it can be a trap.

Today, I’m going to show you five stocks with mouth-watering yields of between 6% and 23% that are tomorrow’s dividend disasters. If you own shares in any of these firms, sell them now.

Don’t “ride these stocks down” like RadioShack shareholders did when the nearly century-old former electronics retailing giant that filed for bankruptcy protection in 2015.

RadioShack suspended its dividend in July 2012. The warning signs were there, but no one listened. Revenues had been in constant decline since their peak 16 years earlier, debts were mounting, ratings agencies were downgrading RadioShack’s bonds. And in April 2012, RSH reported the first of what would be many quarterly losses.