The Safest Bond Fund for 2022: My Mattress

We’ve been extolling cash in these pages since the start of this year. As the Federal Reserve prepared to pause its money printer, we contrarians booked profits and stacked dollar bills.

Long before the media began saying “bear market,” we recognized that a volatile 2022 was highly likely. We were ready for a decline.

As I write, our premium portfolios are all sitting on sizeable cash positions:

Yup. Plenty of capital ready to be deployed after the final “wash out” in the markets.

These comfortable cash seats have served us well. Bonds kicked off their worst start to a year since 1788 (per Nasdaq).… Read more

Why Are Floating-Rate Bonds Sinking as Rates Rise?

Floating-rate bonds are supposed to be sailing right now.

So why are they sinking?

Last week we lamented the reason most bond funds are down this year. The runaway long rate is to blame.

So do funds that own Treasuries. The iShares 20+ Year Treasury Bond ETF (TLT), one of the most popular bond tickers on the planet, is down 10% year-to-date.… Read more

Thank you to our 1,578 Contrarian Income Report subscribers who attended our Q1 webcast last week! We received 114 questions during our one-hour call, plus several dozen more beforehand. Amazing.

Thank you for the thoughtful questions. I’ve read each and every one. Let’s chat about popular closed-end fund (CEF) topics today. (Next week, we’ll circle back with your equity-focused dividend questions.)

Q: Brett, what are your thoughts about Calamos Convertible Funds (such as CCD, CHI and CHY), which are currently yielding about 8%? Thank you.

My friends and I couldn’t have been more excited about our college commencement speaker. Fresh off an electrifying cameo in the 2003 comedy movie Old School, James Carville’s next act was Cornell University.

At 21 years old, we had no idea what Carville actually did for a living. (Answer: Political consultant.) And though he was an engaging and entertaining speaker, I don’t remember a single word the “Ragin’ Cajun” said. Too bad, because he has had some major wisdom to impart.

Ten years earlier, Carville made an observation that is more prescient now than ever. After watching bond investors rebuff President Clinton’s economic stimulus proposals because they demanded a higher interest rate for US Treasuries, Carville coined this gem:

“I used to think that if there was reincarnation, I wanted to come back as a president or the pope or as a .400 baseball hitter.

Historically speaking, it’s best to avoid bonds when your central bank is printing money like crazy. More cash can lead to inflation, which can lead to higher interest rates—and put a damper on any fixed-rate holdings.

But not all bonds are bad ideas. Some have their coupons tick higher with rates. Others can even provide you with the upside of a stock! Let’s review US-centric fixed income, starting with the “outhouse” and working our way up to the “penthouse” quality bonds paying as much as 8% today.

Ten-year Treasuries pay just 0.5% or so as I write.… Read more

The last time we had this Fed setup, these safe 6%+ paying bonds jumped 20% in the year ahead!

The setup? The likelihood that short-term interest rates (as set by the Federal Reserve) will go nowhere over the next 12 months. To see this we’ll turn to the Fed funds futures, which are contracts that reflect real money being bet on the Fed’s upcoming action (or lack thereof). Collectively they comprise the smartest crystal ball available this side of Jay Powell.

Right now, the smart money is giving “no hike” a 75% probability between now and January 2020. And when we add in the bets on a rate cut or two, we’re looking at a 92% chance that rates will either be unchanged or lower this time next year: 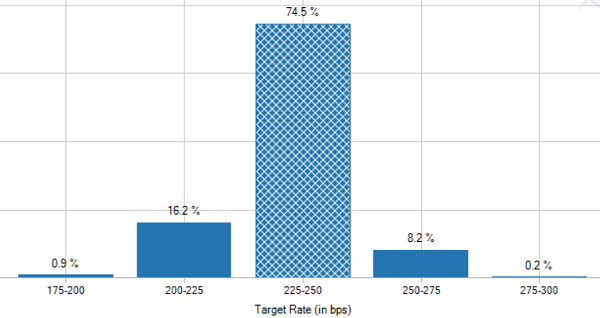