The 1 Investment That Boosts Your Dividends Without Boosting Your Taxes

Now that the Democrats control the House, Senate and the White House, you’re probably wondering what the new administration means for your tax bill—and your portfolio.

There’s good news here, and it comes in two parts: first, the tax hit likely won’t be as much as you think (if you notice it at all!). And second, Biden’s tax plan has quietly boosted the municipal-bond market, where there are scores of tax-free dividends waiting for us. And it’ll likely boost it even more in the months ahead.

First Up, Your Tax Bill

The takeaway is that, while there are some changes in the tax code in Biden’s latest plan, taxes will remain lower than they were when President Trump first took office. Biden’s increases from Trump’s 2017 tax cuts are marginal and will have barely noticeable effects on most Americans.

There are a couple of important implications for investors, however, and they’re effects of Biden’s attempts to target taxes on the 1%. As a result, income earners who make more than $400,000 could see their overall tax burden rise by a few thousand dollars per year.

Bear in mind that you have to earn a lot more for this to kick in. Since these are marginal tax rates, that tax bump only applies to income earned above $400,000. That means you really need to earn a lot more than $400,000 for the tax changes to be noticeable.

Tax Changes: Really Only Noticeable at $500K a Year

This is by design. Biden’s tax plan is aimed at wealthy individuals: think investment bankers, high-flying corporate lawyers and the like. These people also tend to live in highly taxed jurisdictions (think California, New York and New Jersey), which also means they’ll suddenly have an even bigger incentive to find tax advantages where they can.

Which leads me to …

Our Opportunity for Biden-Driven Upside (and Tax-Free Dividends)

If you’re one of these high-six-figure earners in a high-tax state, there’s really only one place you can go to avoid taxes: municipal bonds.

If you aren’t familiar with them, “muni” bonds are a kind of debt that organizations from hospitals to state governments take out by issuing bonds that are then sold on the public market, usually to big institutional investors, as well as wealthy individuals.

(But as I’ll show you shortly, regular folks can also access them through a closed-end fund [CEF]. Like stocks and ETFs, CEFs can be bought and sold on the stock market at any time during regular trading hours.)

To encourage investors to buy, federal (and many state) governments waive taxes on the income these bonds pay out, meaning muni bonds give you an income stream that increases your cash flow without increasing your tax bill.

If you’re a lawyer making $400,000 and you can get $100,000 in income from tax-free municipal bonds rather than, say, taxable dividend-paying stocks, this (legal) opportunity to grab tax-free payouts is a big deal. This is why the muni-bond market jumped when Biden’s victory became apparent shortly after Election Day, and munis have stayed relatively high since then.

A Biden Victory is a Victory for Muni Bonds 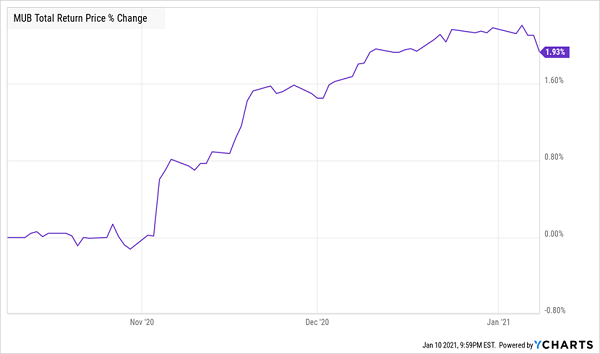 A 1.9% move might not seem like very much—and with the stock market, for example, it wouldn’t be—but it’s a big jump for a market as stable as municipal bonds.

This, in turn, has been great for the iShares National Municipal Bond ETF (MUB), an index fund that tracks this market. But it’s been even better for muni-bond CEFs like the PIMCO Municipal Income II Fund (PML), which trades in the same market but has spiked even further. 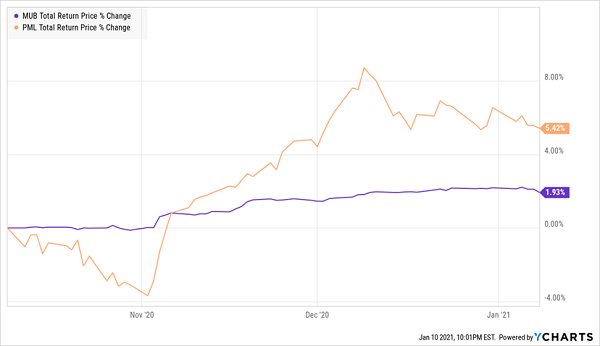 One of the biggest reasons for this is that muni-bond CEFs out-yield the index fund while still being tax-free (in most cases); while MUB yields 2.2% tax-free, PML’s tax-free yield is an impressive 5%. Plus, PML has been outperforming the index fund ever since both have existed.

… And Nearly Doubles Up Its Benchmark 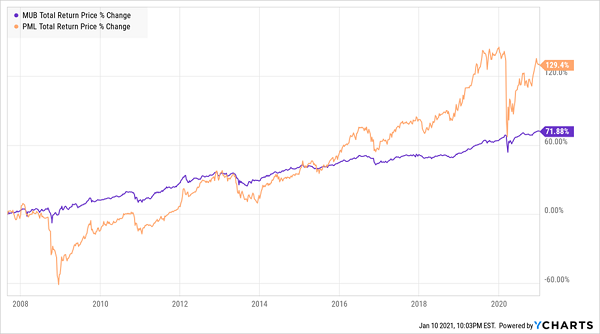 The only trouble with buying PML now is that it trades at a 7% premium to its net asset value—a fancy way of saying that its market price is 7% higher than the value of the municipal bonds in its portfolio. That could still make it a good buy for you, if you plan to hold for the long term, but it could cap the fund’s near-term upside.

These 5 CEFs Are Cheap Now—and Pay You 8% in CASH, Too

I much prefer to buy CEFs at discounts, and that’s exactly what you’ll get with 5 other CEFs I’m recommending that members of my CEF Insider service buy with both hands now that 2021 has kicked off.

These 5 income plays give us the deep discounts we need to lock in fast 20%+ price upside (and cushion our investment in a crash). Plus, they pay an outsized 8% average dividend, too!

I’ve named these funds in an exclusive Special Report I’m making available to the public, and I want to make sure you get your hands on it. Go right here and I’ll give you a copy, which will reveal all the critical data on these 5 income plays: names, tickers, best-buy prices, complete dividend histories—the works.