As Wall Street loses its mind over a long bond that pays a lousy 1%, we level-headed income investors are going to stay calm. And 7.7% on.

Yes, we “prefer” (hint, hint) dividends that are 7X the weak 1% yield the wonks are clamoring about. I’ll get to the specifics on these retirement makers—which we can buy as easily as common stocks—in a moment. First, let’s appreciate their dividend grandeur.

The Fed is content to sit on a near-zero benchmark rate until at least next year if not 2023. Compounding the problem is that yields on traditional blue chips, while always insufficient, are a downright mockery right now—the 1.55% current yield on the S&P 500 is its lowest point in 15 years.

This Is Bleak for New Money 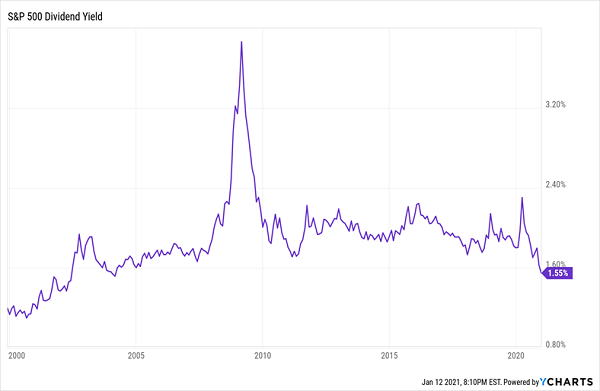 But what if I told you that you could squeeze three, four, even five times more dividends out of the same exact S&P 500 stocks and other blue chips? (A yield that, again, is seven-fold better than the newly famous 10-year Treasury?)

Why I Prefer “Preferreds”

Let’s say we want to go out and buy shares of a company, say Bank of America (BAC) or Goldman Sachs (GS). When we do, these “BAC” and “GS” shares we acquire are known as “common stock.”

Chances are every individual share you’ve ever owned is from this common class. They provide a tiny sliver of ownership in the company, typically a vote in corporate elections, and any dividends declared on those shares.

It’s not a bad deal, but in some instances, it’s not the only way you can invest in a company.

Some firms raise cash by issuing so-called preferred stocks. They’re called “preferreds” because their dividends get preferential treatment—a company must pay out preferred shareholders first, and it can’t suspend a preferred dividend without first doing the same to common shares.

But this dynamic doesn’t come into play very often. What matters more to investors is the nature of the stock.

Preferreds represent ownership in a company, but we typically don’t get voting rights. (Whatever—we’re here for the yield, not a corporate boardroom seat.)

Preferreds don’t appreciate as much as common shares—they act more like bonds, trading around a par value. It’s a smoother ride, like what we see out of Goldman and its Preferred D Series shares below. 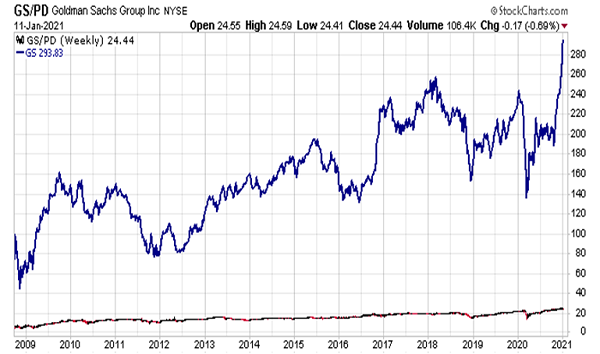 But this is just price performance, not total returns. The upshot to preferreds is they usually deliver far juicier dividends than their common-stock counterparts. Goldman’s D series only yield about 4.1% right now, but it’s typical for preferreds to yield in the 5%-7% range, and it’s far better than the 1.7% on GS commons.

Preferred stocks aren’t a total unknown. Investors have collectively put $19 billion into the index-based iShares Preferred and Income Securities ETF (PFF) for exposure, and billions more are spread out across a handful of other indexed products.

What’s less-known is that active managers of closed-end funds (CEFs) can wring even more returns out of this high-yield corner of the market. Rather than buying whatever the index says they must buy every quarter, active managers can avoid highly questionable preferreds while loading up on unfairly underloved issues.

And they can gin up returns even further through the use of leverage, which you’ll never see in your average preferred ETF.

So let’s take a peek into this under-covered area of the market and see which preferred funds you can trust for a high average yield of 7.7% (and some peace of mind).

Let’s start with the John Hancock Preferred Income Fund III (HPS), which as the name implies is the third of three John Hancock preferred-stock CEFs. It’s both the youngest—by virtue of its 2003 inception versus 2002 for the other pair—and the largest, with roughly $550 million in net assets.

The aim is simple: Management is looking to generate high income from a basket of preferred stocks, and typically at least half the portfolio is going to be investment-grade in nature.

Remember: One of CEFs’ greatest tools is the ability to use debt leverage to invest even more in management’s best ideas. And HPS doesn’t skimp here, levering nearly a third of assets to squeeze every last cent out of its portfolio. 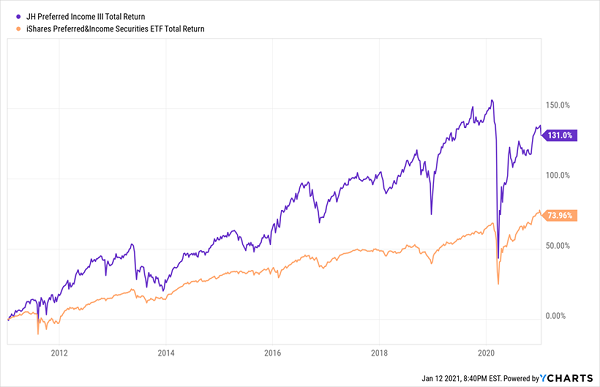 That much leverage does contribute to volatility, so HPS isn’t for the faint of heart. Also, this CEF typically doesn’t present one opportunity its peers often do—to buy its assets for much cheaper than they’re worth. The fund currently trades at a modest 3.6% discount to NAV, and the most that has fallen to at any point over the past year is about 6%. Meanwhile, patient investors can often get quality CEFs at 90, 80 even 70 cents on the dollar if they pick their spots.

If you can stomach that amount of volatility out of a long-term holding, you can generate even more income through this next “hybrid” fund.

The John Hancock Premium Dividend Fund (PDT) siphons income from commons and preferreds alike, and it does so across a tight portfolio of roughly 100 issues. The top 10 holdings, for instance, include both PPL Corp. (PPL) shares and a 5.9% preferred offerings from the very same firm. And again, it uses a healthy heap of leverage (36%) to amplify performance.

PDT More Than Doubles PFF Over the Past Decade 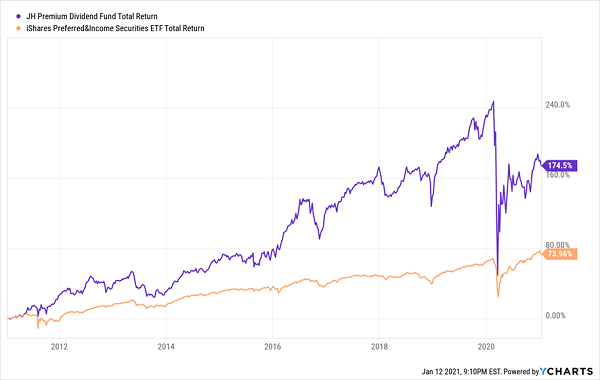 But maybe don’t jump right this minute. The CEF actually trades at a small 2% premium at present, just a few months after trading at a mouth-watering double-digit discount.

This chart clearly shows that PDT takes the occasional nap. I prefer to buy it then, during pullbacks (which can be quite sharp).

Back in September, I called out the Cohen & Steers Limited Duration Preferred and Income Fund (LDP) as a “noteworthy” preferred CEF—one whose makeup has played perfectly to the recent rise in interest rates. 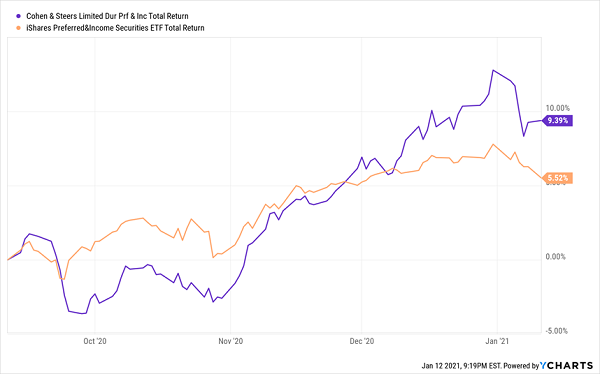 A 4% difference might not seem like much, until you realize that’s just over the past four months, and in an asset class that’s not exactly known for being spry.

LDP is a “limited duration” fund in which the average duration of its portfolio is typically just six years or less. That helps cut down on interest-rate risk, which gives this preferred fund an advantage in a rising-rate environment. While the Fed doesn’t appear to be in a hurry to raise its benchmark anytime soon, additional stimulus and an eventual economic rebound could help push Treasury rates a little higher anyway.

To be honest, this isn’t the best time to buy preferreds. Like the broader stock market, they are pricey. I’m waiting for a pullback.

For example, LDP’s current discount is less than 1%, but at the depths of the bear market, it was trading at roughly 75% of its NAV. In other words, it’s perfectly good preferreds were selling for just 75 cents on the dollar.

When we buy LDP that cheaply, we enjoy three ways to win going forward:

There are some high-yield plays that meet this triple-play “retire on dividends” criteria right now.

My “8% Monthly Payer Portfolio” is priced to buy and doesn’t require a perfect economic environment to churn out massive income and market-beating gains.

I’ve personally hand-picked and safety checked this unique portfolio, from every angle, for maximum safety. That includes a can’t-miss 7%-yielding preferred-stock fund that is actually increasing its cash distributions—a rarity in this space.

These stocks and funds are so cheap that I expect them to easily hold their own if the market limps its way through the continued COVID crisis—and soar faster than the market once the economy really looks like it’s on its way back!

And we’ll soak up their huge payouts the whole time!

The dividends you’ll find here are truly life-changing: drop $500K into this powerful portfolio now and you’ll kick-start a $40,000 income stream. That’s about $3,300 a month in regular income checks!

Now is the time to get in, while you can still do so at a bargain. Click here to get everything you need—names, tickers, complete dividend histories and more—instantly.