Market Shift Ahead: Here’s How to Play It for 7% Dividends (and Upside)

Let’s take a look at how the new stimulus bill affects our portfolios—and dividends!—then look at how we’ll invest in closed-end funds (CEFs) for 7%+ dividends as 2021 unfolds.

One thing’s for sure—unlike the spring package, this one eliminates the problem of big companies absorbing billions in aid. This package is focused on putting cash in consumers’ hands, which I think we can all agree will do a better job of stimulating the economy.

For starters, taxpayers will get $600 in checks sent to them, while people on unemployment will get an extra $300 per week. That $300 is less than the unemployed got in March, but bear in mind that unemployment has fallen since then, too. 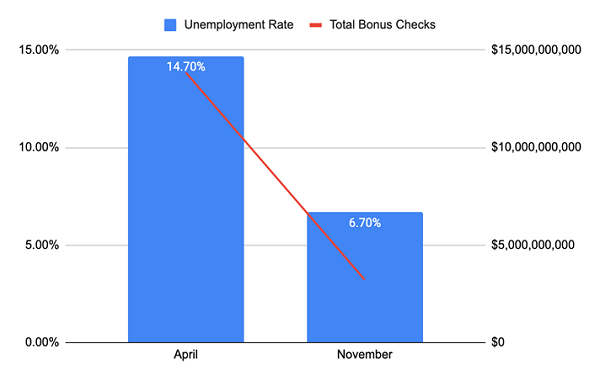 This is good for two reasons. For one, with $3.2 billion going out per week, the plan is set up to provide three months of aid to unemployed workers, which should be enough time for vaccine distribution to have ramped up enough for reopenings to accelerate.

The bill also includes $319 billion for small businesses, with most going to the Paycheck Protection Program. This money, too, will end up in consumers’ hands, who will then use most of it to buy goods and services and keep the economy rolling.

The stimulus hasn’t been fully approved and passed, and President Trump said he actually wants bigger payments ($2,000 per household), which is something House Speaker Nancy Pelosi also wants. That may mean the bill gets delayed a few weeks (at the latest, we can expect President Joe Biden to sign a bill on the day of his inauguration), but it could also mean bigger direct payments that are an even bigger boon to the economy.

New Plan Positions Us for Gains

As the plan currently stands, it’s good for stocks, and a revised plan would be even better. That also means CEFs that are heavily invested in stocks should see bigger profits that, in turn, would mean sustained, and in some cases, raised, dividends to shareholders.

And despite worries to the contrary, this bill is affordable for the government. Since the government funds itself through taxes and borrowing by issuing U.S. Treasuries, we can say that the maximum cost is the interest rate Treasuries pay out.

While the March 2020 aid package borrowed money at a time when rates were a bit lower, if we applied the 0.94% Treasuries currently pay to all $3.1 trillion borrowed to fight COVID-19 (including the current package as it stands), we’d see that the government would need to pay $29.14 billion in interest per year over the next decade to sustain paying off this debt and afford the cost of interest. That’s $88.30 per American, or about $7.36 per month, which suggests there’s enough wiggle room (either through about a 3.7% tax increase or spending cuts) for the government to manage its spending on COVID-19.

What This Means for Stocks (and CEFs)

With stimulus money going out and all signs pointing to manageable COVID-19 spending, there’s reason to think we’ll see continued market optimism in 2021.

That should lead to more spending on technology, particularly this winter, with lockdowns remaining in place in parts of the country. This should continue to benefit a CEF like the BlackRock Science and Technology Trust (BST), a 4.2%-yielder that holds heavyweights like Apple (AAPL), Amazon.com (AMZN) and Microsoft (MSFT). BST has already had a great run, easily beating the NASDAQ this year. 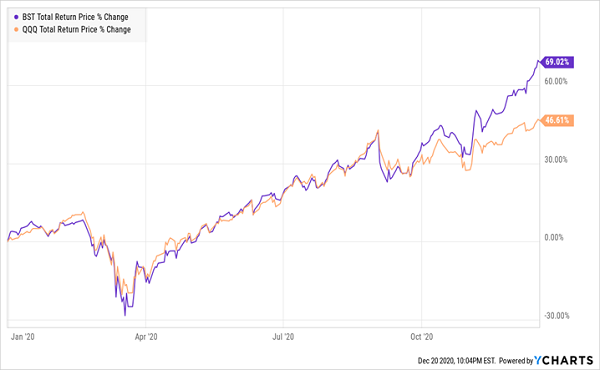 And as vaccinations roll out, they will, of course, lead to more reopenings, making consumers more likely to spend on areas beyond tech. Investors, in turn, will likely look at spreading their investment dollars out more broadly in lockstep.

Picking up on those sectors, while keeping a focus on tech, will be the key to steady gains (and big dividends) in CEFs in the coming year. And you’re likely to find much bigger payouts than BST’s 4.2% yield, which is low for CEFs—the average payout among the 500 or so of these funds out there clocks in at around 7% today.

Bulletin From the Publisher

I’m breaking in here to tell you that Michael has uncovered a CEF that’s perfectly positioned as investors start to look beyond tech as the economy picks up in 2021.

This unsung fund pays a blockbuster 12% dividend right now, and it trades at a 12% discount, too! That nicely positions it to hand us some nice upside (and some downside insulation) while we enjoy that big double-digit payout next year!

I think this really is the perfect pick for 2021, when we expect to see the economy get back on track but are also likely to hit some turbulence along the way.

The name, ticker and all the details on this breakthrough fund have been released to premium members this morning in the December issue of Michael’s CEF Insider service, and I want you to be among the first to get it. Click here to get this issue and take CEF Insider for a 60-day “test run.”

One quick final note: you’ll also get a Special Report revealing 5 other funds Michael has singled out for big dividends (these 5 yield 8%, on average) and double-digit upside.

But you do need to act quickly here, as word of this fund is certain to spread quickly, and new investors will likely drive the share price sky high. Don’t miss out!