Exactly who is retiring on the income from safe bonds in 2021?

You might remember when, once upon a time, the 10-year Treasury was a source of acceptable retirement yield:

Today? We can’t even collect a lousy 1% yield! 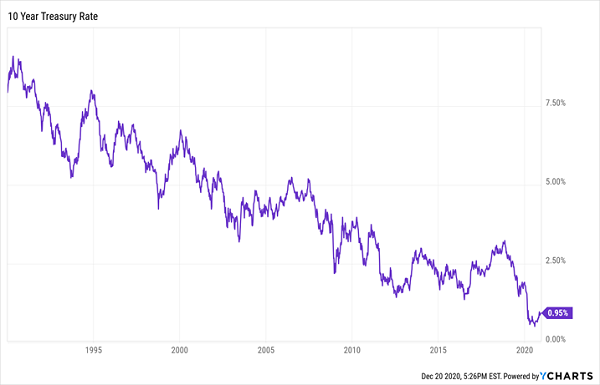 Put a million bucks into 10-year Treasuries and we’re banking just $9,500 per year in income. That’s below poverty levels. Yikes.

Things aren’t any better on the stock side. Yes, traditional equities historically haven’t been asked to carry much of the income load given their growth potential, but a 1.6% yield isn’t much better than bonds. Put a million bucks here, and we’ve got $16,000 in annual income—which we could easily lose in a bad trading session.

It’s just the latest example of the handicap that modern retirement investors have to work with. Buried there in the blue-chip index, however, are a few well-known names that pay real yields. Specifically, I have my eye on a trio of companies whose collective yield is almost five times the S&P 500’s.

Kinder Morgan (KMI) is one of America’s premier energy infrastructure firms, though from an asset standpoint, it’s a shell of what it once was. What once was a nearly $100 billion company in 2015—shortly after Kinder Morgan absorbed its two master limited partnerships (MLPs)—has been cut down by two-thirds since then, to about $33 billion. 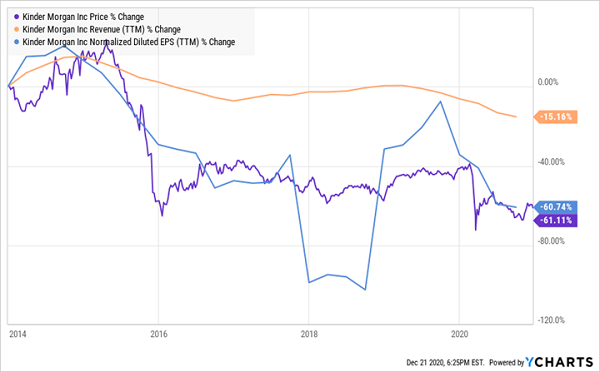 Let’s consider the upside. We now have the chance to invest in a sprawling energy blue chip with a 7% yield at a low price, at least in relative terms. Kinder Morgan’s operations are vast, spanning 83,000 miles of pipeline transporting natural gas, crude oil, cardon dioxide, gasoline and other products, not to mention nearly 150 terminals.

If and when energy rebounds, Kinder theoretically should, too.

That said, the company’s preliminary outlook for 2021 left a bitter taste in many investors’ mouths. The firm says adjusted earnings before interest, taxes, depreciation and amortization (EBITDA) will come in at $6.8 billion, and distributable cash flow (DCF, an important profitability metric for MLPs that speaks to the health of the dividend) will come in at $4.4 billion.

That came in shy of many professional expectations, as did Kinder’s projection for a 3% year-over-year dividend raise to $1.08 per share.

Maybe management is being conservative. After all, we’re not exactly out of the COVID woods yet. But Kinder Morgan isn’t yet giving us a reason to be excited about its growth prospects for 2021. I prefer an energy play like ONEOK (OKE), which still pays more than 9% today, and has greater upside than KMI.

Anytime we see a nearly 8% dividend for less than 10 times forward earnings estimates, we have to at least investigate. Hence our inclusion of US tobacco giant Altria Group (MO)—responsible for cigarette brands such as Marlboro, but also John Middleton tobaccos, Ste. Michelle wines, not to mention large investments in marijuana stock Cronos Group (CRON), Juul vaporizers and Anheuser-Busch InBev (BUD) beverages.

Altria isn’t just cheap; it’s actually growing. Revenues are expected to grow about 5% in 2020 before groaning another 2% in 2021. Profits are expanding by mid-single-digits over the next two years, too. The company’s been doing well enough, in fact, to authorize a dividend hike (albeit a miserly 2% one) during a 2020 in which many companies were cutting or killing their payouts altogether.

And yet, Altria has been in steady decline since peaking in 2017. 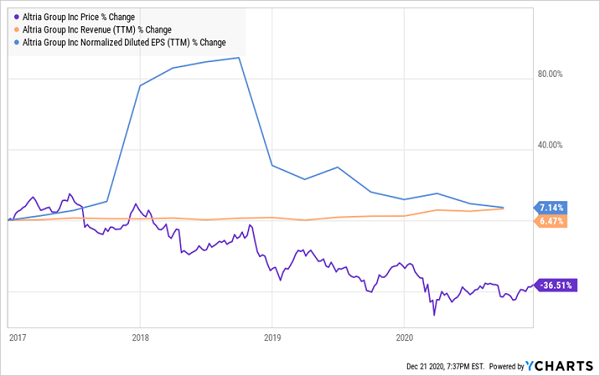 These are painful self-inflicted wounds that have caused MO’s debt load to balloon. Net debt, which sat at $9.3 billion in 2016, has nearly tripled to $25.1 billion since then. That’s a weight around its neck not just because of interest payments cutting into earnings, but because it hinders Altria’s ability to make future acquisitions it’ll need to navigate the nation’s continued pivot away from tobacco.

Could MO shares bounce back in 2021? Certainly. Does that make Altria a smart long-term hold for income-hungry investors? No, it’s not a buy and hold forever name any longer.

AT&T (T) has defined the telecommunications industry for decades. Many years back, it was a wellspring for growth—but as the U.S. telecom market became saturated, it became a source of perpetually generous yield. That’s thanks in part to its relentless dividend hikes, which span 36 consecutive years, putting AT&T among the ranks of the Dividend Aristocrats.

AT&T’s Price Should Catch Up to Its Dividend … Right? 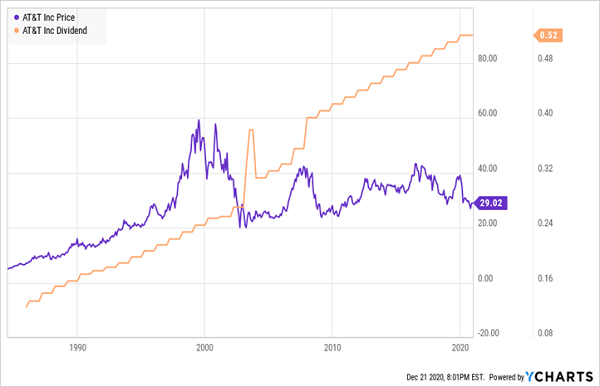 The telecom hasn’t been content to just sit around and throw off cash, however. It has made a few stabs at becoming a spry growth stock once more. For instance, in 2014, it bought satellite provider DirecTV for roughly $49 billion. More recently, in 2018, it closed on an $85 billion deal to buy up Time Warner.

But like Altria, AT&T’s dealmaking hasn’t exactly hit it out of the park.

After years of bleeding subscribers, AT&T recently started shopping around DirecTV … and the bids have been so poor that it “told prospective bidders it may cancel the auction altogether if it doesn’t get better offers,” according to a New York Post report citing “sources close to the situation.”

The Time Warner buy has its own issues. Namely, AT&T has to find a way to squeeze profits out of these new media assets, including Warner Bros., HBO and CNN, at a time when streaming competitors are both strong and numerous, and when the theater industry has been completely upended by COVID.

All of that is enough to give any reasonable investor pause. But the screaming red alert came just a few days ago, when AT&T announced its payout for the February 2021 dividend:

52 cents. Exactly the same as it was a year ago.

Technically speaking, AT&T merely has to pay more in 2021 than it did in 2020 to maintain its Aristocrat status, so even a marginal hike near the end of next year would seal the deal. But this is the first time since 2004 that the company hasn’t juiced its payout to start out the year.

Give Me 4 Minutes, Grow Your Income By 4X

I know you might be discouraged that some of the few high-yielding blue chips on Wall Street look like complete duds, but don’t be.

The truth is that it has been a long time since large, well-known stocks have been able to deliver enough income to sustain a retirement on dividends alone.

Instead, investors “in the know” have learned to rely on the path less traveled—like the blue-ribbon high yielders in my “Perfect Income” portfolio.

The market’s recent volatility has been for a few good “mini-bargain” dip-buys. But it has done little to bring up the yield on what is a chintzy market for dividend investors.

That’s not exactly going to fund the rich, financially free lifestyle you worked so hard for, is it?

But the dividend-rich stocks in my “Perfect Income Portfolio” can deliver the returns—and the peace of mind—that you’ve earned.

I frequently talk to my readers, who tell me that these stocks have managed to double, triple and sometimes even triple the dividends they were earning from their old income portfolios.

Click here to get a FREE copy of my Perfect Income Portfolio report, including tickers, buy-in prices, dividend yields, full analyses of each pick … and a few other bonuses!