27% Returns After a Dividend Cut? Here’s How

When this closed-end fund (CEF) lowered its monthly dividend for the first time in 17 years, many income investors (understandably) panicked and sold.

Too bad for them. They missed out on 27% returns over the next 20 months.

Can a dividend cut actually be a good thing? Like life itself, it’s complicated—but my short answer is “yes.” Here’s when (and why).

CEFs are the exception to the “dividend cuts are bad” rule. In CEF-Land, payouts are taken from a fund’s portfolio, which is represented by a fund’s net asset value (NAV). Sure, the funds that we buy generally have income streams that are supposed to “power” NAV higher. But the flow of funds is such that the fund gets paid, and then we investors get paid. 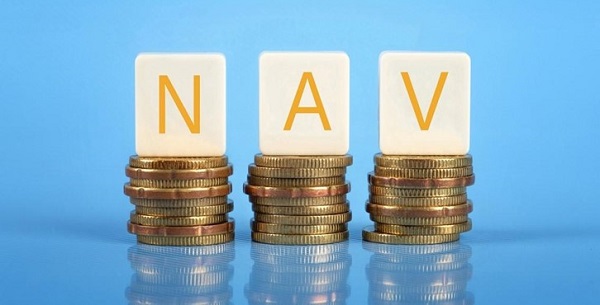 As far as we are concerned, there are two main ways for a CEF to fund its dividend:

We can think of the NAV and the dividends as being on a seesaw together. The higher the yield, the more pressure on NAV—and vice versa. 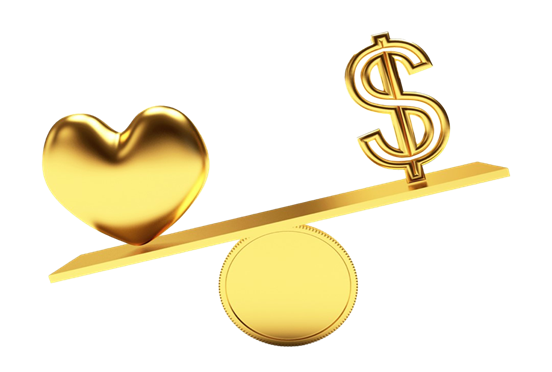 Since we are in it for the income, we look for CEFs that pay generous dividends. And, in return, all we ask for is a stable NAV or better, which shows us that the fund is not overpaying us when it dishes our dividend every month (or quarter).

So, when the Aberdeen Asia-Pacific Income Fund (FAX) lowered its monthly payout for the first time in nearly two decades in April 2019, I argued it was actually no big deal, for two reasons.

First, the fund still paid 8% at the time. Not bad in this zero-point-nothing world.

Second, the dividend change was really just an accounting footnote. Sure, it meant a little less cash every month. But the savings would accrue to the fund’s NAV, which in turn would lift its price. And that’s exactly what’s happened.

Now don’t get me wrong, the fund was initially sold by investors who didn’t make this connection. Two weeks after the announcement, FAX was 4% lower—a big move for a normally stable bond fund. This was actually a great buying opportunity, as the fund would deliver 27% total returns in the 20 months to follow: 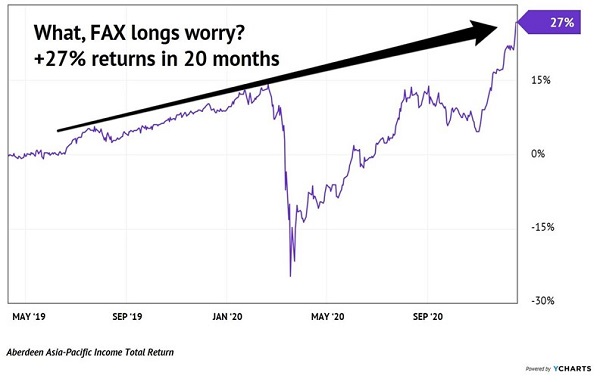 Had FAX not cut its dividend, its total returns during that 20-month time period would have been… 27%. The same.

The difference in the dividend policy means we collected a bit less in cash and a bit more in price appreciation. All things being equal, we of course prefer the money. But gains are gains and as I mentioned earlier, 8% is still generous enough for our current income needs.

And oh by the way, when we consider FAX today, we see that we still have a nice buying opportunity, thanks to the fund’s

We now have a similar buying opportunity in the DoubleLine Income Solutions Fund (DSL). The CEF, managed by the “bond god” Jeffrey Gundlach and his team, caused quite the stir when it announced its own payout reduction to kick off this month.

DSL has recently traded at a premium to its NAV, but the “dividend disgrace” has landed the fund back in the bargain bin:

DSL Back to a Discount 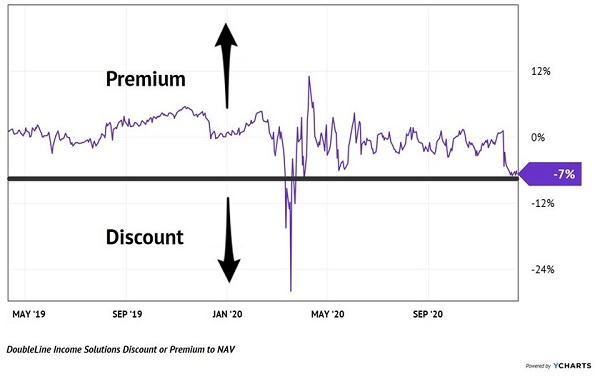 Since we added the fund to our Contrarian Income Report portfolio that year, it’s rewarded us with 53% total returns. Most of that has come in the form of the fund’s monthly dividend. (The fund’s NAV sits today roughly where it was when we originally bought DSL. Which is great. That’s all we ask of a high-paying CEF—just keep the NAV steady!) 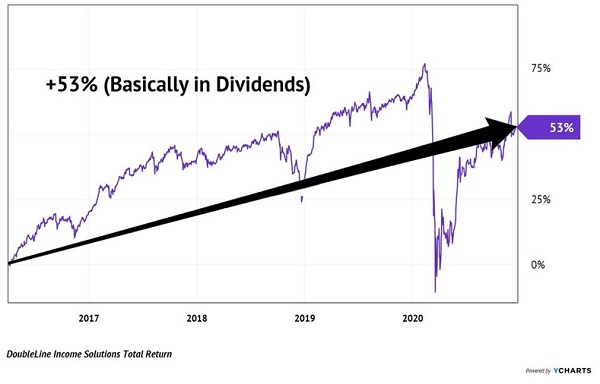 After the dividend change, the fund still pays a great 8% and now trades at a nice 6% discount to its NAV. Sound familiar? This is analogous to the setup we saw in FAX after its own payout spectacle.

Fittingly, DSL’s NAV is doing about as much of a “moonshot” as we ever see in CEF-Land. It’s up 14% over the past six months, with 4% of these gains coming after the payout heartbreak event. The fund’s price, meanwhile, still sits below its previous celebrated levels, as scared income seekers have dumped DSL without considering its likely comeback.

If you haven’t yet bought this dip, this is a nice time to initiate a position in DSL or add to an existing one. I suspect that when we look back on this opportunity months from now—when another high-quality CEF lowers its dividend—we’ll be wishing we bought more of the bond god during DSL’s brief moment in the bargain bin.

Publisher’s Note: Brett’s colleague Michael Foster, editor of our CEF Insider service, stays glued to anything and everything to do with CEFs. And in his latest issue, which comes out tomorrow, he’s going to recommend a fund with a 12% dividend! AND you’ll get a chance to grab this fund at a 12% discount, too!

This smaller CEF is totally off the radar, but with the upside and income it offers (especially with today’s low interest rates translating into a negative return for most savers after inflation), I don’t expect that to last. Click here to get first-mover advantage on this 12%-paying CEF when it’s named tomorrow morning and take CEF Insider for a no-risk test drive for 60 days.