You Still Have Options 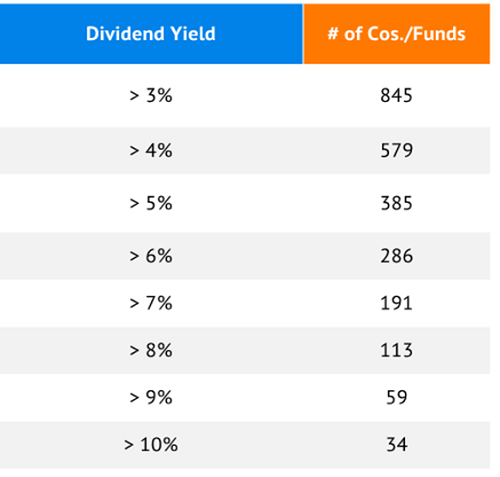 If any of these yields are safe, of course.

In the world of high yield, security is tricky. There are more dividend traps than sincere investments. But, hidden gems are there for those who don’t mind doing the research.

Let’s do some income investigation today. We’ll highlight a five-pack of almost hilariously high yields between 9.7% and 15.3%.

This tremendous 12.3% average yield will spin that million dollars into $123,000 in annual income. But can we keep the principal intact?

Let’s start with The India Fund (IFN), which is what the name suggests: a closed-end fund (CEF) that invests in Indian equities.

The bull case is as straightforward as it gets. India is one of the world’s largest emerging markets—a potential powerhouse, thanks to a young population that’s nearly a decade younger than China on average, an increasingly digitized culture and promising reforms that include labor, land, agriculture and infrastructure.

And IFN hopes to tap into that growth via a tight, actively managed portfolio of roughly 40 equities. And in many ways, it has excelled: 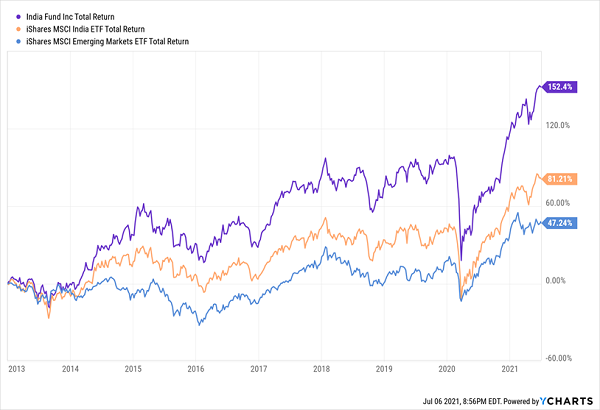 And yet, it still can’t beat US large caps:

India: A Long Way to Travel for Underperformance 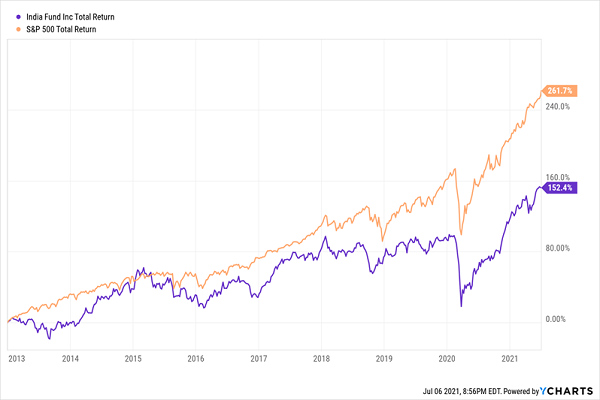 Part of it is on India itself, which has enjoyed mid- to high-single-digit growth for most of the past decade. But many of its companies have not been able to leverage GDP gains into earnings growth. And higher stock prices require higher profits.

IFN has a few problems, too. For starters, the portfolio is highly concentrated. More than one-third of its assets are piled into just five stocks.

The 10.6% yield is a bit of a mirage, too. Yes, we do receive quarterly payments from IFN, but the vast majority of that is long-term capital gains and return of capital, not dividend income.

Invesco Mortgage Capital (IVR) is a mortgage real estate investment trust (mREIT), which means that it doesn’t actually own or operate any real estate. Instead, it deals in “paper”—in IVR’s case, agency and non-agency mortgage-backed securities (MBSes), commercial MBSes, residential and commercial loans, and more.

I mentioned back in February that Invesco Mortgage Capital at least tried to take advantage of a recent short squeeze by announcing a plan to offer 2 million shares to raise cash. Shareholders weren’t happy about that, and they spent the next few months grinding sideways while the market popped 13%. 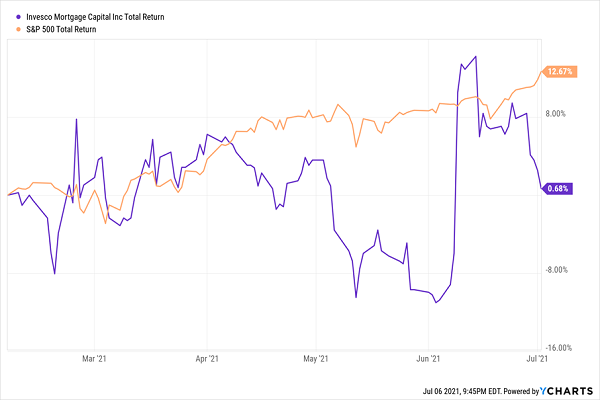 IVR continues to limp along. Book value declined 5.5% and its average net interest rate margin declined by 14 basis points in the first quarter. Also, its dividend has been all over the place—it was recently cut, and without meaningful profit growth, the current payout remains in jeopardy.

Cornerstone Strategic Value (CLM) is another CEF, but one that looks like our average blue-chip mutual fund.

CLM holds both U.S. and non-U.S. equities with a balanced approach of value and growth. But there’s nothing balanced about the size of its holdings, with the average market cap sitting at $216 billion at the moment. Amazon.com (AMZN), Apple (AAPL), Alphabet (GOOGL) and Microsoft (MSFT) combine for nearly a quarter of assets on their lonesome. It feels like a run-of-the-mill Vanguard or Fidelity large-cap offering.

The similarities continue: CLM doesn’t use a lick of leverage to accomplish its goals. And the fund charges 1.14%, which while high compared to any basic index ETF, is downright pedestrian when compared to actively managed mutual funds with a similar charge.

This money is largely spent for nothing, as CLM fails to beat the basic S&P 500 index: 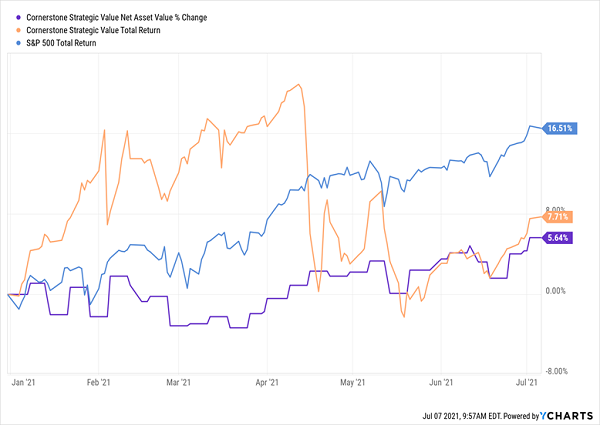 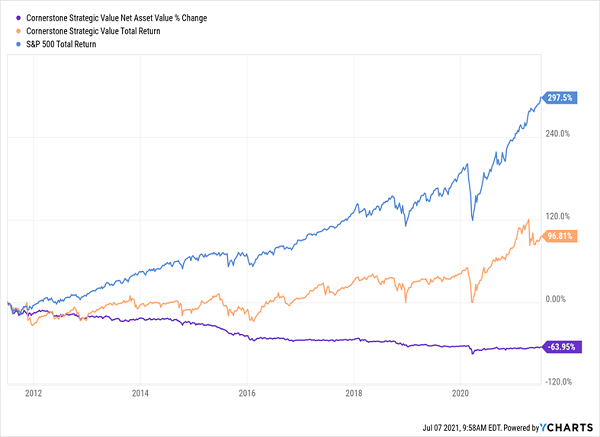 Cornerstone is lagging the broader market this year, and over the past decade. And like IFN, what performance it does provide comes almost entirely from its distributions – which are mostly composed of long-term capital gains and return of capital, not dividend income.

Plus its current premium to NAV of 13% is right around its five-year average, presenting us with no real reason to buy.

Oxford Lane Capital (OXLC) is another CEF that deals in collateralized loan obligations, or CLOs—an asset that most retail investors will never deal with.

CLOs are similar to mortgage-backed securities in that they’re pooled investments. But rather than pooled mortgages, CLOs typically are pooled corporate loans.

Another way of saying it: Oxford Lane’s holdings tend to be backed by a lot of business debt.

This is an opaque market that your average investor will struggle to even get sufficient information about, let alone even understand. You’re trusting OXLC management to do that, and you’re paying them richly to do so—a 2.87% annual expense fee, not to mention a host of other costs that bring its annual expenses up to more than 9%!

To its credit, OXLC has performed well over the past few months, but the music could stop in a hurry. 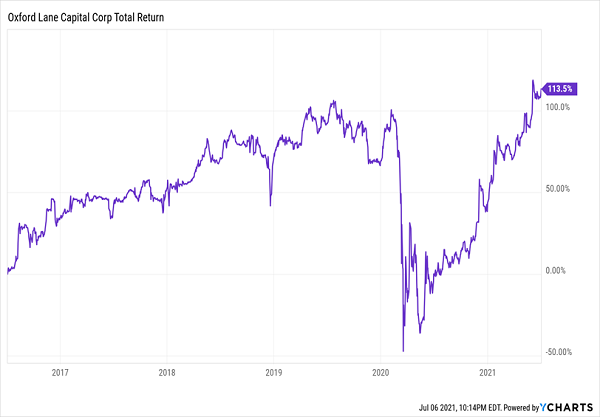 OXLC’s technical picture is showing that it’s due for a pullback. And the same high leverage (nearly 35%) that helps it gin up returns is the same force that can help accelerate losses once the worm turns. The potential trigger? A laughably high price. Over the past five years, Oxford Lane has averaged a steep 17% premium to NAV, and it’s well beyond that now, at nearly 29%.

The outlook for CLOs admittedly remains strong, but when you pay an extra 29 cents on the dollar and high annual fees to boot, you’re not playing the odds.

What better way to collect more than 14% in annual income than to hitch our wagon to one of Wall Street’s most well-known activist investors?

So why is such a diversified portfolio controlled by a famed stock picker unable to consistently top the market, even with a double-digit yield?

You Can’t Exactly Set Your Watch By IEP 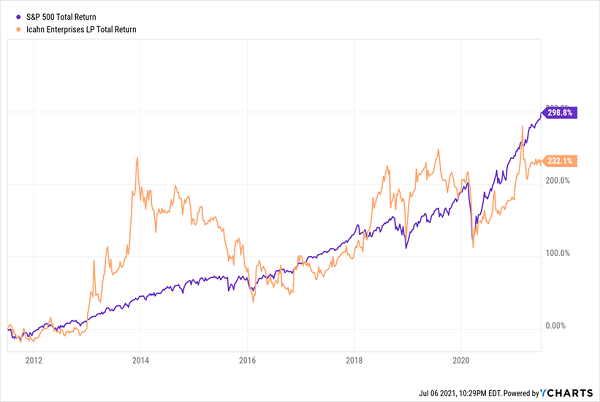 Because for all of Icahn’s riches and fame, he has made mistakes. Performance has been hampered by untimely choices, such as long bets in the energy sector and short bets against the broader market.

No wonder, then, that dividends have been doing the heavy lifting for years. 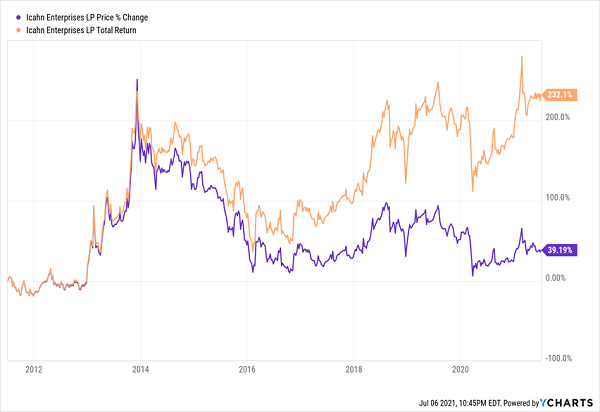 That’s the rub with a lot of super-high-yielders. You get tremendous payouts, but mediocre to downright bad operations weigh on shares, so you’re ultimately left with lackluster price returns that can’t even keep up with a basic U.S. index fund.

Fortunately, you don’t have to make that kind of trade-off with the “Perfect Income” portfolio.

Many of my readers have doubled and even tripled the dividends they were earning from their old income portfolios. (And in a couple of rare cases, experienced a 4x jump in their regular checks!)