These 7.3% Dividends Are Safe (If You Follow These 3 Steps)

If you’re on the hunt for big dividends (and who isn’t these days?), closed-end funds (CEFs) must be on your shopping list. As I write this, there are more than 500 CEFs in existence, yielding an outsized 7.3%, on average.

Ten-Year Treasuries? A still-pathetic 1.7%, even after their recent big jump.

But as dividend-rich as CEFs are, some do cut their payouts sometimes, just like any other dividend-paying investment. (Though the good news here is that, even after a cut, a CEF’s yield will almost certainly crush that of a typical stock, because CEFs’ payouts are so large to begin with.)

Of course, we don’t want any reduction in our income. And there is an easy way to guard against one—it just takes three simple steps.

A lot of investors get hung up on one phrase when it comes to CEF dividends: “return of capital.” This misleading term makes it sound like a fund is simply giving you back your capital after you’ve given it to them instead of investing it and making a profit. In reality, return of capital is a tax strategy to minimize your bill to the IRS (tax advantages are a big reason why CEFs are great for retirees). I explain this in detail in “The Shocking Truth About CEF Return of Capital.”

So the first step is an easy one: don’t focus too much on metrics like return of capital, net investment income and capital gains. In the CEF realm, these are merely accounting terms funds use for tax purposes. They don’t predict a CEF’s actual performance or the sustainability of its dividend.

What you want to do instead is focus on total NAV return. This is a simple concept that shows the true viability of a fund’s current dividend. Simply put, total NAV return looks at the return a fund has gotten from all sources, such as dividends, capital gains, options-contract premiums, coupons from bonds, interest from lending activity—literally every inflow of cash the fund’s portfolio generates.

When you’ve got this number, the math is simple. If the fund’s total NAV return is greater than its payout, its dividend is sustainable.

For example, let’s take the Virtus AllianzGI Equity & Convertible Income Fund (NIE) and compare it to the Cornerstone Strategic Value Total Return (CLM). The former has not cut its payout in a decade, while CLM’s dividend has been cut a dozen times in that period. 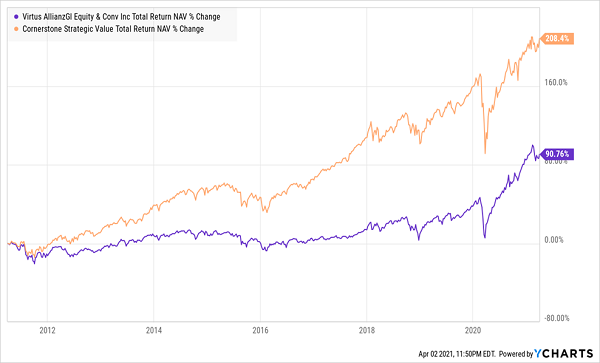 As we can see above, CLM has beaten NIE on a total NAV return basis, but CLM has still been unable to sustain its payouts because its massive yield (14.4% currently) is higher than its 11.9% annualized NAV return over the long term. Plus, when we zoom in on the last three years, things look worse: 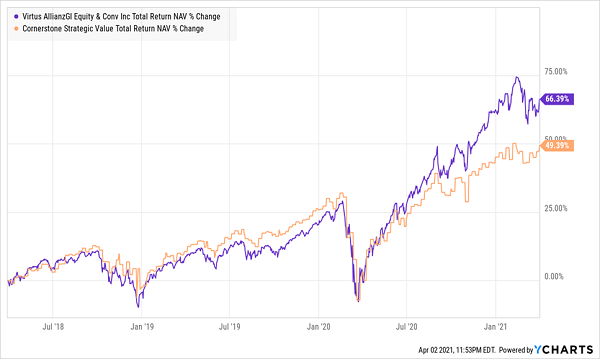 With just an 8.4% annualized return CLM trails NIE, putting its 14.4% payout at an even greater risk of being cut. And that’s why this chart makes sense: 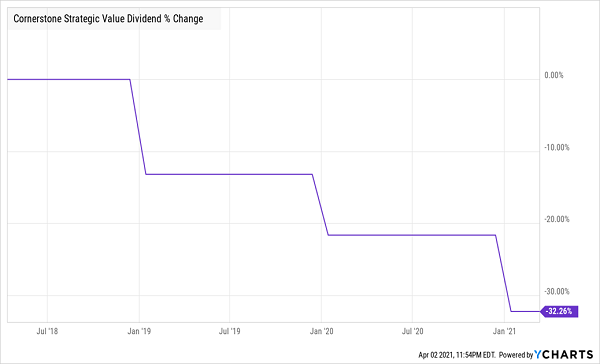 NIE, on the other hand, has earned a 6.7% total NAV return over the last decade that far exceeds its 5.4% payout. Meanwhile, its 10.7% annualized return over the last three years is almost double its payout, meaning not only is a cut very unlikely, but a dividend increase may be coming soon.

Step 3: Remember That Many CEF Dividend Cuts Result in a Stronger Overall Return

So if you’ve zeroed in on total NAV return and found that it exceeds a CEF’s dividend yield, you can clearly see that the fund’s payout is likely to be sustained. But that’s not a guarantee.

And, in reality, there is no guarantee, because CEFs are actively managed by professionals who make decisions on what payouts to give to investors, and they do sometimes decide a cut is in order, even if dividend coverage is strong.

The good news here is that, if your fund is well run, management will take the extra cash saved through the payout and use it to buy undervalued assets at opportune times. The end result is that you would make a higher total return—with dividends and gains included—than you would have if the dividend weren’t cut at all! I’ve seen this happen regularly with CEF dividend cuts.

But at the end of the day, the best way to maintain a passive income stream of 7%+ with CEFs is simple: have a robust and diversified portfolio of funds whose total NAV return exceeds their current yield.

The four CEFs I want to share with you now yield 7.4%, on average, and boast well-covered dividends you can count on. Drop, say, a $300K nest egg into these 4 funds and you’ll kick-start a $22,200 yearly income stream!

Better still, these 4 funds are among the few bargains left on the market today: they’re trading at totally unusual discounts that just can’t last. As these deals disappear, I expect these funds’ prices to jump 20%+ in the next 12 months.

Your forecast total return: 27.4% (including dividends) in the next 12 months.

Click here and I’ll share with you an exclusive investor report that gives you the full details on these bargain-priced 7.4%-paying CEFs. You’ll get their names, tickers, current yields, my in-depth analysis of their holdings and everything else you need to know.