The Best Bonds to Buy in a Recession

Generally, recessions are bullish for bonds. Which makes this 3.8% bond yield a “best recession bet.”

Why are we talking bonds in a year where they have all been crushed? Well, that’s the reason. The cure for poor bond performance is the high yields that are now staring us in the face. We look forward, not backward.

If you took our cue and used cash under your mattress as a bond proxy for the year, then you are sitting pretty. Because now, we finally have attractive fixed-income yields!

Granted, safety is the key here. Remember, we are picking an economic slowdown as our catalyst. We want to profit in all conditions, but today we are not looking for exposure to credit that may blow up.

We’ll take secure income at levels that we haven’t seen in years. And, as always, we won’t argue with the price upside that accompanies these bargain levels.

This hasn’t happened yet. But history tells us it should happen soon.

Let’s look back to 2008. Stocks, commodities and really everything crashed. One of the lone exceptions? US Treasuries, which powered popular iShares 20+ Year Treasury Bond ETF (TLT) to a 28% gain: 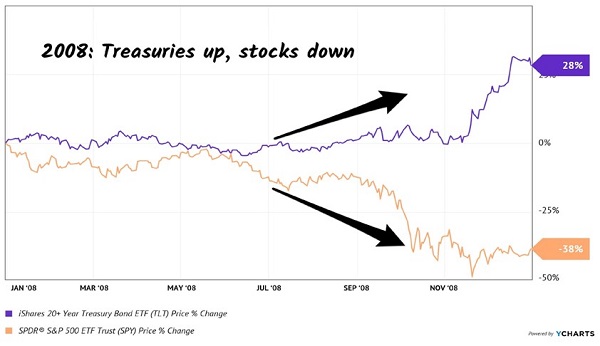 The difference in 2008? The economy was already imploding. The financial mayhem was bullish for TLT. The world flocked to Treasuries as the sole secure savings vehicle in the tumult.

This year, 2022, has been its own special type of dumpster fire. It has been particularly frustrating for retirees because stocks and bonds have collapsed together. Inflation—plus an aggressive Federal Reserve plus a (thus far) persistently steady economy—has drop-kicked both equities and fixed income.

The result is that TLT has been no haven. Sure, it has still paid its dividend. But even including payouts, the fund is down 30% year-to-date—worse than the S&P 500. Ouch! 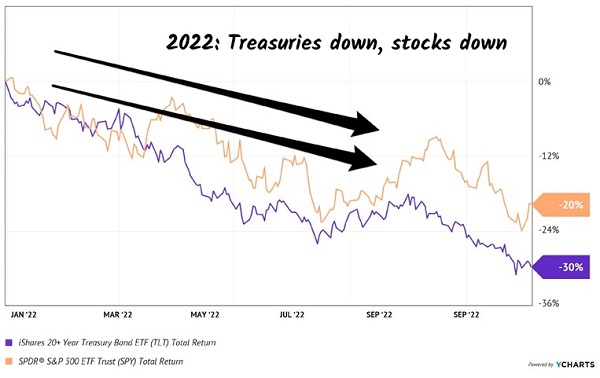 This is not what income investors were looking for from safe Treasuries. But again, let’s remember that in Bondland, bad news eventually becomes good news. Lower prices mean higher yields, which attract yield-hungry buyers.

TLT’s trailing dividend is now 2.3%, its highest since 2019. While nothing to write home about, the fund’s SEC Yield—its dividend “run rate” over the past 30 days, minus expenses—is 3.8%. Now we’re getting somewhere. 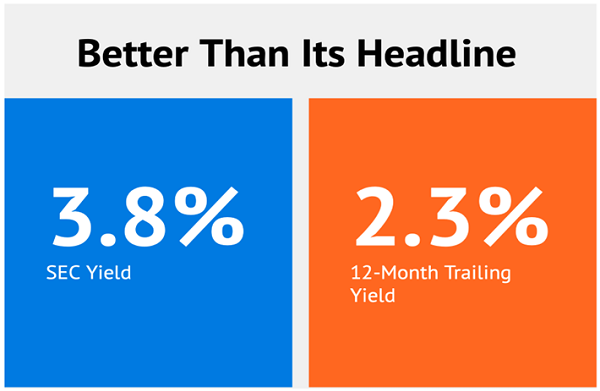 Put a million dollars into TLT, and we have $38,000 in annual income. Not quite a 7% “No Withdrawal” Retirement Portfolio, but respectable.

[Pro tip: Always use SEC Yield when evaluating bond funds. This is the distribution stat developed by the Securities and Exchange Commission (SEC) itself to support a truer yield measurement. The trailing twelve-month yield gets “stale” quickly.

SEC Yield reflects the interest the fund earned, minus expenses, over the past 30 days. It’s the best guide for us today and tomorrow than the TTM payout. For bond yields, we want to know where we’ll go, not where we’ve been.]

So is TLT finally a buy now after its 30% markdown? The 3.8% yield is nice, and it will get paid, but we want limited downside and some upside. (Why not have it all?)

The fund has two drivers that determine its—and any bond’s—price direction:

Credit risk is not a concern with Treasuries. If Uncle Sam gets into a bind, he’ll just print more money!

Duration headaches are the reason TLT is down 30% YTD and why every other bond and bond fund on the planet has plummeted. But this “threat” is topping out because the Federal Reserve is engineering a recession.

TLT has been repriced this year. The good news for bond bulls is that the markdown is either complete, or at least, due for a breather.

How to play this to win? We contrarians generally prefer bond closed-end funds (CEFs). It’s rare that we consider bond ETFs.

But when we do, we cherry pick deals. And TLT is poised to rally when long-term rates cool down.

But again, TLT doesn’t pay enough to fund a retirement. We need 7% yields or better. Fortunately, they are abundant today!

Thanks to the bond bear of 2022, there has never been a better time to put together a “No Withdrawal” Retirement Portfolio. Please read on for the details so that I can share my favorite yields up to 10% with you today.