My Personal Plan for Big Gains (and Income) by 2020

Something strange is happening in the investment-bank and hedge-fund world: a growing sense that the next recession (which, by the way, Wall Street has long been wrongly predicting for years) finally has a due date: 2020.

The number of Wall Street firms predicting this date is staggering.

Bloomberg’s Joe Wisenthal has collected a few predictions, such as one from Moody’s Analytics chief economist Mark Zandi, who said 2020 will be the economic “inflection point,” and Société Générale’s economic team, who said the likelihood of a 2020 recession has risen due to, among other things, a tight labor market and higher borrowing costs.

Even former Federal Reserve Chairman Ben Bernanke is getting in on the act, saying a boom “is going to hit the economy in a big way this year and next year. Then in 2020, Wile E. Coyote is going to go off the cliff.”

Doom and Gloom = Cheap 7%+ Dividends for You

This all sounds scary, but the stock market doesn’t care—it’s been too busy surging to new highs: 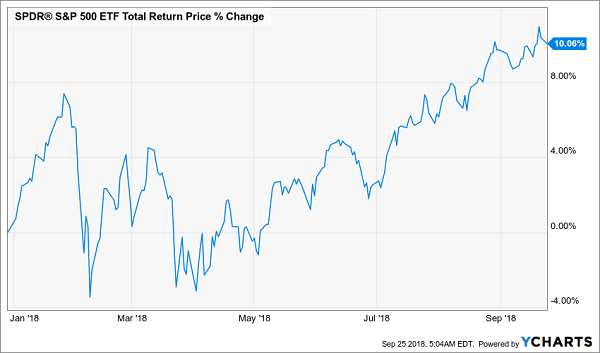 Stocks’ 10% year-to-date gain means that, if this trend continues, we’ll see a 13% total return for the S&P 500 for all of 2018. That’s far from the kind of market Wall Street seems to be panicking about.

So let’s dig into the fears behind this gloom and doom, and why there’s nothing to fear at all. Then I’ll show you 2 funds you can buy now that will get you all that is best about this still-strong US economy.

And when I say “best,” I’m talking huge dividends up to 10%, and long-term performance that tops the market’s return, too.

But first, let’s dive into 3 fears that are driving the market today, so we can see what’s setting up the 2-fund opportunity I’ll show you toward the end of this article.

By far, the biggest panic of 2018 has been over the yield curve.

When the difference between the yield on the 2-year US Treasury and the 10-year US Treasury goes negative for longer than a few days, America falls into recession. This is pretty much clockwork: it’s happened every time for decades, making this the most reliable recession indicator.

And the yield curve—that is, the difference between these two yields—has been narrowing since February 2018, when the market’s last major sell off hit: 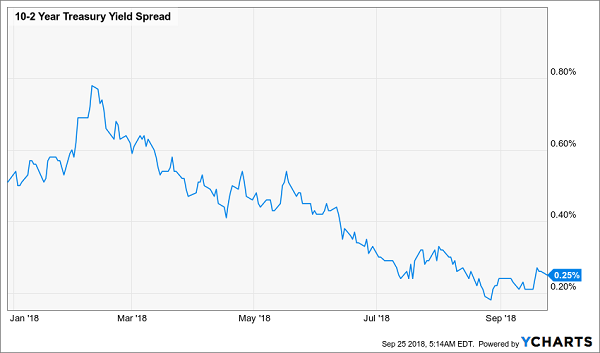 Note, however, that the fast decline from February to July has abated, and we are now about where we were in July.

The second fear is so silly it almost isn’t worth taking seriously—until you realize a close look at this fear shows just how wise it is to buy stocks now.

And that worry is that corporate profits are perfectly positioned to start falling.

That sounds bad—until you look into why they are so well positioned to fall: because they’re so absurdly strong right now.

Let me quote FactSet: a “record-high percentage of S&P 500 companies beat EPS estimates for Q2.” That sounds good—and then when you realize just how high expectations were, you realize this isn’t just good, it’s amazing. 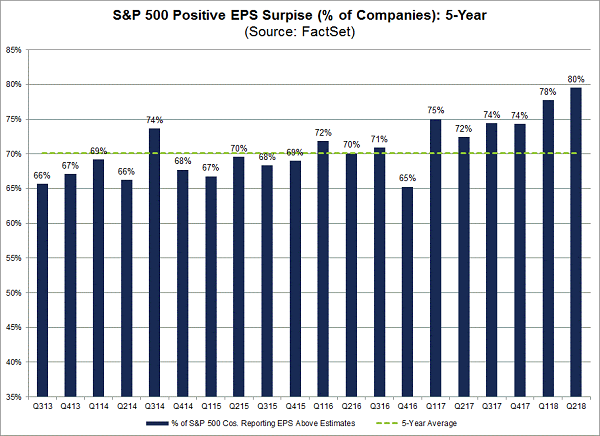 Here’s the Chicken Little logic: with earnings growth this high, how can it possibly get any higher?

Of course, this is an old fear we saw in the third quarter of 2014, when oil prices were crashing and pundits warned that a 2008-style disaster was about to unfold. Here’s what the market has done since then: 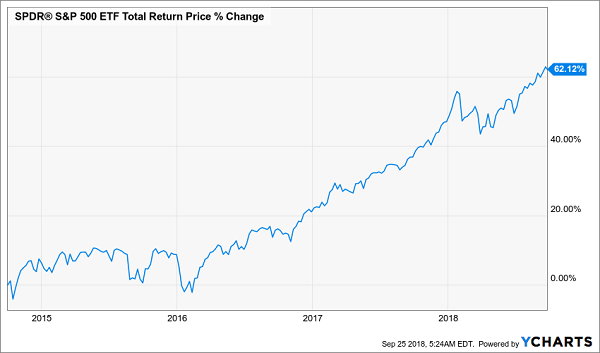 The bottom line? If you sell into today’s fears, expect to miss out on gains like these.

The 3 “Ts” that are driving many financial fears are largely political, with a lot of attention honing in on two moves by Donald Trump.

The first move was the 2017 tax cuts that many economists have said could overheat the economy. The second, and more alarmist, fear is that Trump’s tariffs, specifically those aimed at China, will result in a trade war that kills US exports.

The trade-war fears largely drove the market correction in February, but there’s just one problem: the tariffs are too small to matter. Even at their recent expansion to $250 billion in imports, tariffs on Chinese goods represent about 1% of America’s economy. And those tariffs are effectively a tax of about 13% of those $250 billion—meaning the actual impact on the US economy is about 0.17% of GDP.

These are microscopic numbers. Yes, they could increase—but until they do, the drag on the economy from tariffs is too small to matter, meaning it’s too early to respond from an investment point of view, no matter what your politics may be.

Still, these fears feel like they warrant some type of response, so what should it be?

Simple! As canny contrarians, we’re going to pounce on these overdone worries and buy stocks now.

But what’s the best way to do it?

If you choose to buy stocks individually, you’ll need to invest a lot of time and/or money in research. Pick a low-cost index fund like the SPDR S&P 500 ETF (SPY) and you’ll likely enjoy a strong return. But that return will, by definition, be mediocre, because SPY doesn’t try to pick winners or losers. Plus, SPY’s dividend yield is a joke at 1.7%.

Then there’s the path less traveled: high-yield closed-end funds (CEFs) that invest in many S&P 500 stocks and offer a shot at better price gains, along with a higher income stream (and not just a little higher: payouts of 7% and more are common in CEF land).

Our first pick is the Nuveen S&P 500 Dynamic Overwrite Fund (SPXX), which provides a mix of equity exposure and insurance on a big market slide to provide returns, because this fund uses call options (a kind of insurance against stock exposure) to limit downside risk.

It also boasts an outsized 6.7% income stream that’s nearly 4 times the S&P 500’s average yield. Plus, SPXX has closely tracked the market in terms of overall performance while providing that bigger income stream:

SPXX Hands You Your Win in Cash 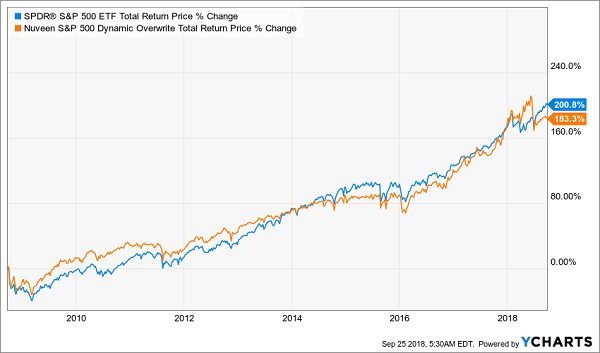 Or you could snap up the Liberty All-Star Equity Fund (USA) and its incredible 10% dividend yield, as well as its portfolio of mid-cap and large-cap US stocks. This one has actually beaten the “dumb” index fund over the last decade, too:

A Massive Return Over the Long Haul 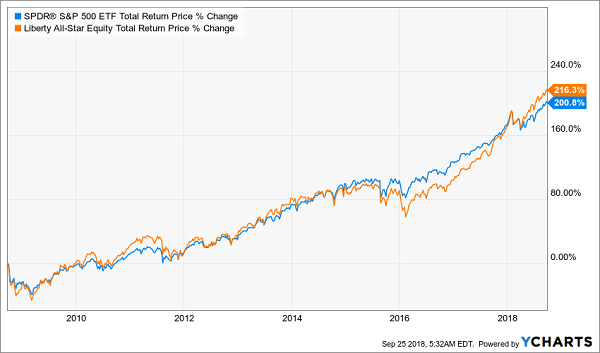 Whatever path you take, it’s pretty clear that now is not the time to panic—even as we keep our eyes peeled for whatever 2020 may bring!

And just before I sign off, there’s something else I need to tell you…

Just Released: The 5 CEFs You Must Buy Now

USA and SPXX are terrific CEFs, with outsized gains ahead (and 7%+ dividends) that will see you through no matter what happens between now and 2020.

But they’re just the start.

Because me and the team at my CEF Insider research service just released 5 MORE cash-spinning CEF picks you’ll want to make sure you get your hands on now.

Because these 5 funds pay a 7.9% average dividend yield, with 2 of these income monsters throwing off truly massive payouts over 9%!

And that’s not all—because each of these 5 offbeat funds trades at a ridiculous discount to net asset value (NAV, or the true value of its portfolio).

Here’s what that means to you: if the pundits are right, these discounts mean our 5 picks will simply trade sideways in a downturn—and we’ll sail through, collecting their 7.9% average cash stream, with much of that paid monthly, to boot!

And if they’re wrong, these funds will hitch a ride with stock markets, PLUS we’ll pocket 20%+ “snapback” gains as their ridiculous discount windows slam shut!

This is the closest thing I’ve ever seen to a perfect situation in investing, and all 5 of these incredible income plays are waiting for you now. CLICK HERE and I’ll show you their names, ticker symbols, buy-prices and ALL of my research absolutely free!