3 Big Dividends in a Washed-Out Sector

Today, I’m going to show you how to find fat dividend opportunities in washed-out sectors. Let’s start with retail, where the hits just keep coming. (And the result is a few sky-high yields. Too good to be true? Let’s explore.)

You know the story by now. Amazon.com (AMZN) pioneered e-commerce, taking it from an interesting tech niche to the retail-reaper it is today. The numbers tell it all, as Statista estimates retail e-commerce sales will nearly double between 2018 and 2024. 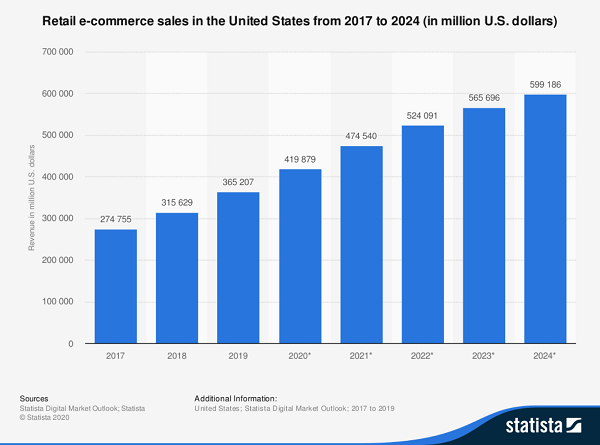 Yes, the overall retail pie is growing, but not nearly as fast as e-commerce is. In other words, e-commerce is increasingly gnawing on brick-and-mortar’s lunch. 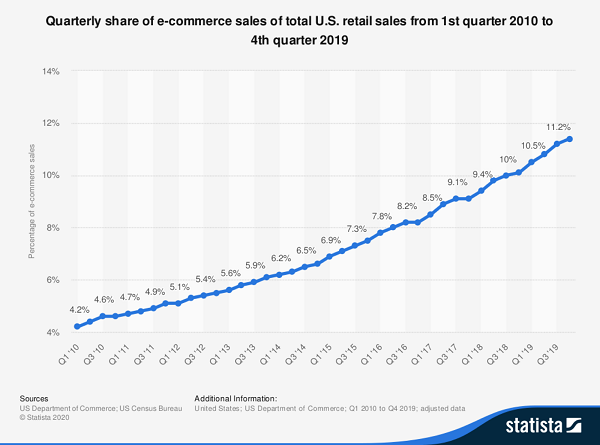 Brick-and-mortar retail has produced many more losers than winners as a result. Mall occupancy is struggling. Heck, it’s almost impossible to do retail business anymore without some sort of e-commerce arm. Some, such as Williams-Sonoma (WSM), actually log more sales online than they do in their physical stores now.

But what Amazon started, the coronavirus is accelerating. Stay-at-home mandates, the closure of essential businesses and the spread of “social distancing” are all ravaging legacy retailers. Macy’s (M) has been forced to furlough most of its 130,000 workers. Same with Kohl’s (KSS), which will shelve 85,000 of about 120,000 employees.

And it’s getting brutal out there. Yet you wouldn’t know it to look at a few consumer-related exchange-traded funds (ETFs) out there, which are giving false hope to “first-level” investors: 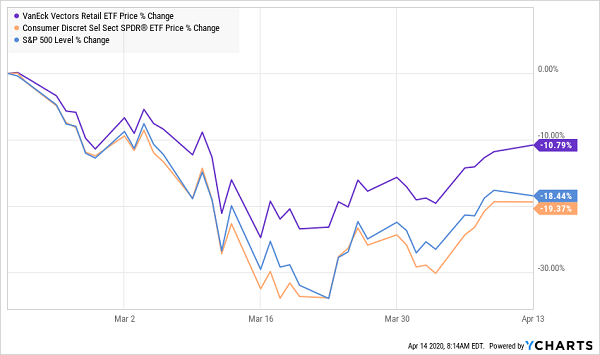 It’s not a “trick,” per se. However, when you think of “retail” or “consumer discretionary,” you probably think of certain retailers, but not others. But if you do just a little digging, you’ll see why they’re holding up so well.

These funds are overloaded in 1.) Amazon.com, which accounts for almost a quarter of each ETF’s weight, and 2.) several consumer staples retailers like Walmart (WMT) and Target (TGT), as well as staples-esque retailers like Home Depot (HD), all of which have been deemed “essential” and thus remain among the few brick-and-mortar stores still open.

But here’s what the story looks like if we examine the SPDR S&P Retail ETF (XRT), which uses a modified equal-weight index. Translation? Companies like GameStop (GME) and Office Depot (ODP) can have just as much effect on the fund as Amazon and Walmart. 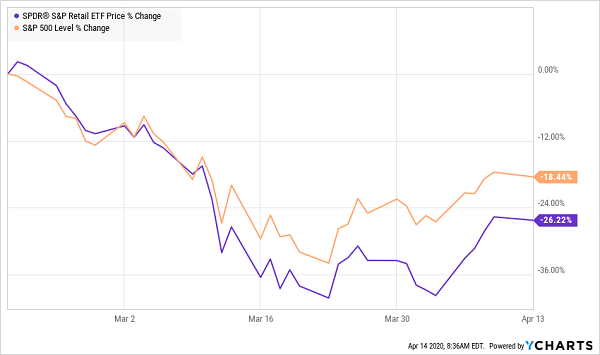 But even XRT has plenty of weight in standalone big-box retailers like Walmart, Target and the like. But a look at the mall landlords shows a miserable picture for brick-and-mortar retailers.

Malls Are Bleeding Out 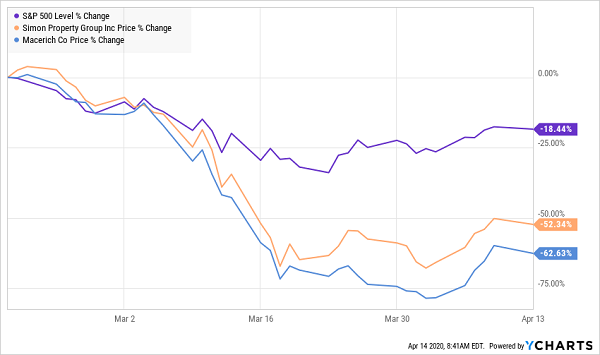 While many investors (rightfully) shun any industry in this much trouble, it’s often worth looking at damaged areas like this for investment opportunities. Two types, to be specific:

Today, I want to show you three such retailers, each of which is also throwing off income right now.

I want to start off with one of the ultimate contrarian plays of the past half-decade: Best Buy (BBY).

You probably laughed at that statement. Laugh away. I’ve gotten a couple of chuckles over the years as I’ve touted this brick-and-mortar retailer that time supposedly passed by, and that Amazon turned into the poster boy for “showrooming.”

Now, here’s what investors who only followed the headlines missed out on over the final few years of the bull market:

Not So Funny Now, Is It? 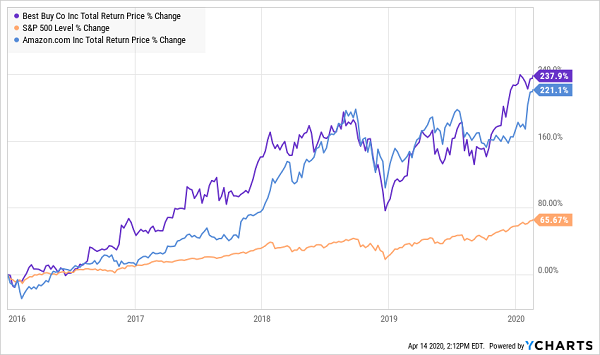 Best Buy has always had an ace up its sleeve in the form of Geek Squad, and I’ve never understood why people discounted the power of a helping hand in the consumer biz. But importantly, Best Buy isn’t just physical stores anymore, and not by a longshot—the web accounted for more than a quarter of BBY’s sales during the all-important holiday season last year. That’s 5 percentage points better than 2018.

More interesting still: Best Buy has enjoyed a surge of buying amid the coronavirus outbreak. Yahoo Finance’s Brian Sozzi pointed out in March that a Best Buy employee in New York City compared a rush of work-from-home technology prepping to Black Friday. Sure, workplaces are likely sending employees home with keyboards and mice if they want them. However, many people prefer their own peripherals if they have the choice, and then there’s printers, scanners and other office equipment everybody can’t haul home.

Best Buy continues to pivot with the times. The company barred people from its stores just days after Sozzi’s observation, but they’ve introduced curbside pickup—not just for purchases, but also Geek Squad repairs—through orders placed on the site.

Still, the company derives 75% of its sales in physical locations, so it’s naturally going to suffer as long as quarantines continue. Plus, high unemployment is certain to ding sales. 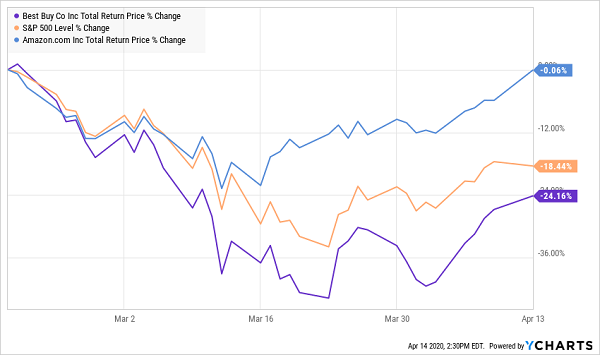 While I’ve thought highly of Best Buy over the years, the retailer is in a difficult situation. A long period of social distancing is likely to change many Americans’ retail habits. And all of Best Buy’s physical-store customers aren’t necessarily a lock to spend at BestBuy.com.

BBY is cheap, at just 0.4 times sales, 10 times forward earnings and a well-above-average 3.3% yield. But I don’t expect the same kind of raucous ramp it produced over the past four years.

Domino’s Pizza (DPZ) is in many ways similar to McDonald’s (MCD). It’s a consumer stock and also  a tech stock.

In McDonald’s case, a simple look through the drive-thru window gives you an idea of how the company leverages technology to speed up orders and get more customers in and out efficiently. If you haven’t seen one of their drink machines in action, take a look.

As for Domino’s: I’ve mentioned before that while changing its awful pie recipe was a game-changer, a wide number of improvements (including technology) also changed its fates and made DPZ one of the best stocks of the bull market. Domino’s created its own point-of-sale system (dubbed “Pulse”), text ordering, “hotspots” that allowed people to have pizzas delivered to them at the beach. While many restaurants need to order food through apps such as Uber Eats or DoorDash, DPZ has long had its own successful app.

It continues to push the envelope. In summer 2019, the company opened an “Innovation Garage” in Ann Arbor, Michigan. The company has tested self-driving delivery vehicles alongside Ford (F) for years. It has even rolled out a voice-recognition system for ordering across a few dozen stores.

Domino’s Is a Technological (And Market) Marvel 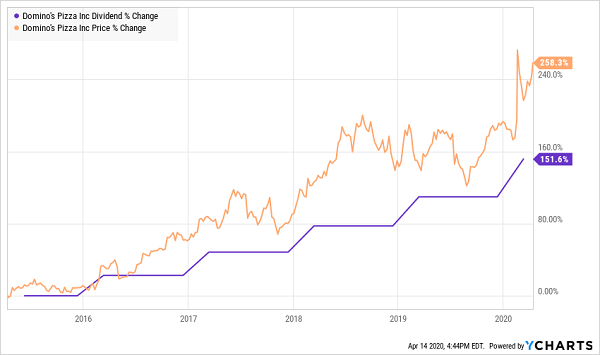 DPZ is not only built to do well as long as we’re all in quarantine, but its products are priced to keep consumers buying in the midst of an unemployment surge. And on top of all this, its dividend has shot up by 150% over the past half-decade.

My only complaint is price. DPZ is twice as expensive as the S&P 500 based on forward-looking earnings estimates. That’s tough to swallow. But another marketwide panic selloff could provide us with a nice buying opportunity.

Home Depot (HD) is quietly the fifth-largest e-commerce retailer in the country, and its online revenues are growing at a 20%-plus clip. But at the same time, online isn’t a huge part of the DIY outlet’s success. Internet sales represented less than 10% of Home Depot’s revenues in 2019—and more than half of that is really “omnichannel” in nature, with people ordering online but picking the goods up at a physical location.

Its ability to resist Amazon.

Amazon’s retail tentacles have spread far and wide. In addition to acting as a third-party seller, it has expanded into its own line of generic products, it has a “Handmade” section to go after Etsy (ETSY), and it’s part of an online pet-food duopoly with Chewy.com (CHWY). But, to date, Amazon simply hasn’t been able to put together a viable threat against Home Depot and rival Lowe’s (LOW).

That’s a moat to end all moats.

For now, Home Depot remains one of a handful of retailers allowed to remain open—during the spring DIY rush, no less, and at a time when many Americans are suddenly homebound and looking for things to do. That’s an enviable position to be in.

Despite Home Depot’s Popularity, There’s Still Some Dip to Buy 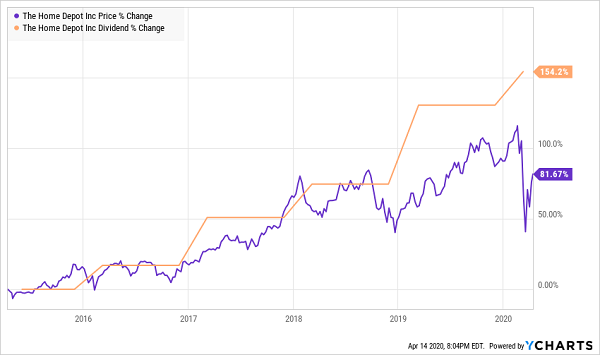 Home Depot continues to put the pedal down on its dividend, too, including a 10% hike earlier this year. But while HD’s stock price tends to chase its dividend higher, the recent pullback has knocked that train off the rails.

The upshot? That could set Home Depot up a profitable game of catch-up.

Until stores open, and people can enter without wearing masks, I’m going to be hard-pressed to buy a retail payout. Sorry, I understand the health precautions… but I’ve got retirement portfolio precautions to worry about first.

To address my reader’s retirement income needs, I’ve identified, researched and “due-diligenced” 7 recession-proof dividend growth stocks. With stocks crashing and most bonds being “nationalized” by the Federal Reserve, these retirement savers are must-haves right now. Click here and I’ll share the details on this pullback-proof retirement portfolio, including names, tickers and buy prices.