Get your dip-buying lists ready, because it’s almost time to pounce.

Just recently, I explained to investors that, as a contrarian, we only want to fully dive into the market when we have a clear edge—the kind of edge you get when Wall Street has fully capitulated:

“We only want to fully invest when the regular investor has thrown in the towel. And there are plenty of indicators that can tell us exactly when our time has come. Consider, for example, the closely watched CNN Fear/Greed Index, which sits at 26 as I write.”

That was just a week ago. Now, as the market has plunged into bear-market territory, the Fear/Greed Index is really starting to shuffle in our direction. We’re not there yet—again, just a few weeks ago, the index had gotten all the way down to six!—but we’re now at the point where we should be ready to jump at a moment’s notice.

So, what are we buying?

Three of The Best Letters in Income

It’s a rare asset class that can even occasionally deliver 7% or 8% yields, but a pair of niche investments regularly offer high-single-digit and even-double-digit yields.

And one of those asset classes is the humble business development company, or BDC. 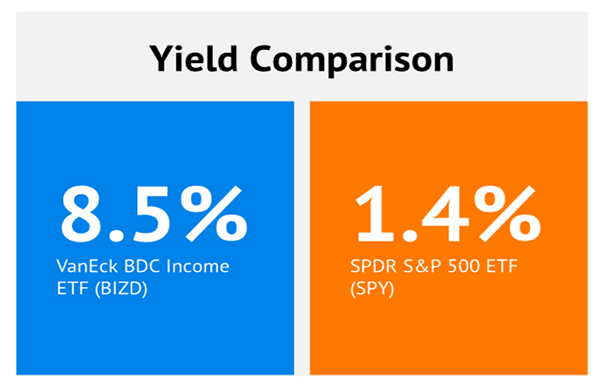 BDCs don’t get a lot of love from typical financial media outlets, and for good reason: They’re complicated, and they don’t make for easy, exciting stories.

If you’re not familiar, business development companies came about during the 1980s as an act of Congress, which spurred this new asset class to life to encourage investment in small and midsized businesses—much the way they created real estate investment trusts (REITs) during the 1960s to do the same thing with real estate.

BDCs filled a big hole in the business world. For years, larger banks shied away from smaller businesses because of their outsized risk. And if they deigned to actually provide financing to an upstart, they’d charge an arm and a leg for it.

BDCs provide all sorts of debt, equity and other financing to firms in countless industries. Which means that business development companies effectively boast diversified portfolios of holdings in private businesses that you and I could never invest in on our own.

If that sounds like private equity… well, it is, and that’s the true pull of the BDC.

As a result, BDCs boast diversified portfolios of private businesses that none of us could invest in on our own. But unlike PE, which typically requires investors to ante up a million or so to play, you and I can jump into a BDC for the price of a single share—typically between $10 and $100.

And while they do invest in small businesses where growth is often the first-to-mind trait, BDCs are actually high-yield monsters. That’s because, like REITs, BDCs don’t have to pay federal taxes… as long as they deliver at least 90% of their taxable income back to shareholders in the form of dividends.

And one last thing before I show you a few of these high-yield plays: Business development companies are a particularly stellar play for this particular moment in time. That’s because many of their portfolios are heavily, if not entirely, invested in floating-rate loans, which means their rates (and thus profit margins) rise as interest rates rise.

With all that out of the way, let’s look at three BDCs yielding an amazing 10.7% on average.

Let’s start off with Apollo Investment (AINV), which provides primarily debt, but also some equity, investments to middle-market private companies (Apollo defines this as companies with revenues between $50 million and $2 billion). At the moment, the company trades at just 70% of its net asset value (NAV), at least signaling the potential for a screaming value buy.

By the way, if you’re thinking, “Wait, that Apollo?”, yes, there is a connection–Apollo Investment Management, L.P., an affiliate of Apollo Global Management (APO), acts as AINV’s external adviser.

Currently, AINV boasts a $2.52 billion investment portfolio that spans 139 companies in 26 industries. Core corporate lending makes up about 83% of that portfolio, primarily (94%) via first-lien loans to companies in the healthcare & pharmaceuticals, technology, business services and other industries. Importantly, a whopping 99% of those loans are floating-rate in nature, so from that standpoint, AINV is attractively positioned.

Another part of its portfolio has been much more problematic. The Merx aircraft leasing portfolio, which makes up about 12% of its assets, has suffered mightily in 2022 due to its exposure to Russia. Now, the BDC plans on slimming down this arm: “AINV intends to reduce its investment in Merx by selling aircraft and deemphasizing its servicing business.”

The thing is, Merx provides a substantial double-digit yield. That’s a concern given Apollo’s track record.

AINV delivers both regular dividends and “top-up” special dividends as profits allow, which typically is a sign of a safer, more conservative dividend program. Not so with Apollo Investment, which has delivered three dividend cuts since 2011 that have collectively seen its quarterly payout dwindle by 57%.

In other words, AINV is cheap—but given its lack of dividend dependability, it hardly seems like a value. 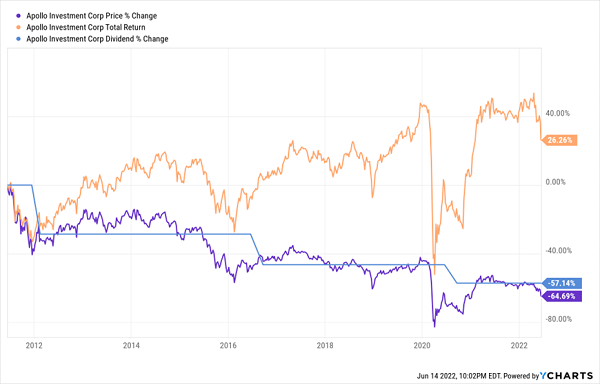 At a 20% discount to NAV, it’s not as cheap as Apollo, but that’s still an enormous bargain if Barings’ fundamentals check out.

Barings, by the way, wasn’t always called Barings. Up until August 2018, the company was Triangle Capital—a BDC that served lower- and middle-market firms. And it had a tendency to frequently shoot itself in the foot. Triangle repeatedly wrote off bad investments and hacked away at its dividend. I said in November 2017 that CEO Ashton Poole was “looking at all options,” and he did: The company would end up changing its name and ticker roughly a year later.

Where Barings stands out is its diversification: Its assets are broken down into U.S. middle-market and European/Asian Pacific middle-market companies, but it also has the portfolios of two BDC acquisitions—MVC Capital and Sierra Investment Corporation (SIC)—cross-platform investments, and some cash and short-term investments.

This diversification and high-quality holdings haven’t panned out for investors yet—at least from a price perspective. BBDC has returned a little less than a benchmark BDC fund since around its rebranding—but the dividend has shot up like a rocket, with Barings raising the ante almost every single quarter since then.

If BBDC Chases Its Dividend, Watch Out Above! 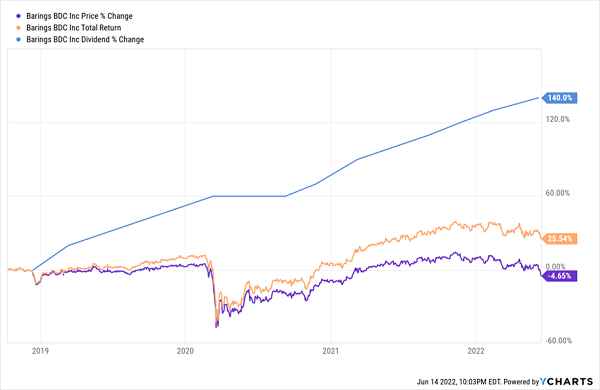 FS KKR Capital (FSK) is, along with AINV, among the cheapest BDCs right now at a 30% discount to NAV.

But given its weak performance over time, one might argue that FSK should trade at least somewhat depressed levels. 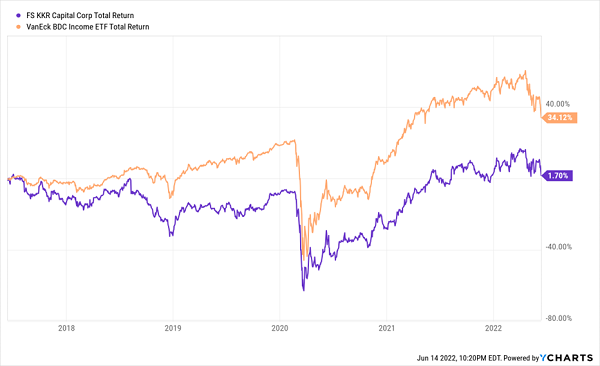 And 87% of FS KKR Capital’s debt investments are floating-rate in nature, so investors are getting some built-in protection from the Fed here. In fact, FSK said that a 100-basis-point increase in the Fed’s benchmark rate would boost its quarterly net investment income (NII) by 4 to 5 cents per share.

That’s attractive, as is the FS KKR Capital portfolio’s increasing credit quality. Less so is its dividend, which has been trending in the right direction of late, but is far from reliable:

Just Try to Plan Around This Payout 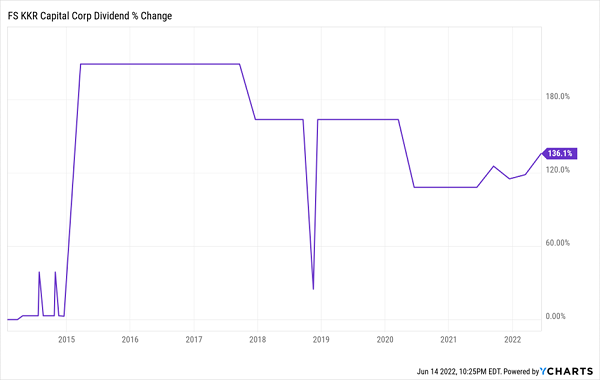 FS KKR might not be a screaming buy despite its massive discount, but that’s OK. Many are starting to think the recent downturn has nudged some of the market’s best high-yield dividend names back into “BUY NOW!” territory.

My “Perfect Income” portfolio features some of the most generous, yet stable, dividend investments I’ve found.

The only problem: In normal market conditions, they tend to trade at lofty valuations thanks to their clear performance potential. But every now and again, when the market throws a fit, Wall Street throws the baby out with the bathwater and gives us a chance to buy even more on the cheap.