Time to Buy My 3 Favorite Gold and Silver Dividends?

Money printing is back in a big way, and we’ve been on the beat all month long. Two weeks ago, your income writer mentioned the other “I” word, inflation, and watched our customer service email box fill up.

Readers, rightfully so, were concerned that Fed Chair Jay Powell has been not-so-subtly orchestrating the largest money creation effort of all time. JP created more than $2.5 trillion since March, and in doing so, made all previous quantitative easing (QE) efforts look like amateur hour:

Lat week, your dividend analyst further stirred the pot by mentioning the other “D” word, deflation. I suggested we prepare for bouts of stock market and spending pullbacks in between these money printing efforts. After all, it’d be challenging for inflation to “stick” as long as the virus is with us, depressing demand.

New money is one thing, but it must chase something for prices to rise. With restaurants at one-quarter capacity and Americans watching every penny they spend, it’s unlikely that we’ll see the price and wage increases commonly associated with inflation.

Yet gold bugs are crawling back onto the scene, preparing for their big potential moment. Since then-President Richard Nixon completely cut ties between the US dollar and gold in 1971, yellow metal fans have been readying for a true moonshot move in the monetary relic (one that’ll make its 1970s bull move look humble). With gold now approaching 7-year highs, are we about to hear commercials about Powell sending gold to $10,000? 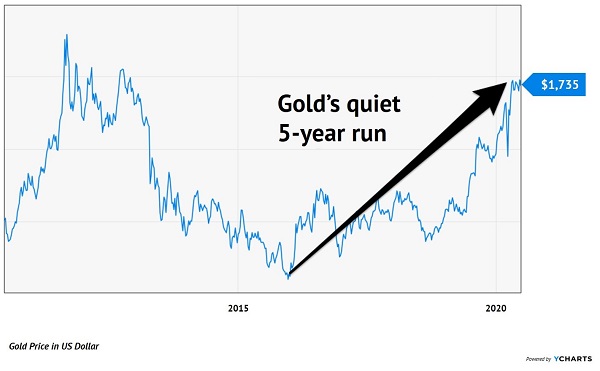 Gold’s case has always been a logical one. It used to serve as the primary medium of money, and humans still think of it as a monetary instrument. The supply of gold only increases by about 1% per year, whereas the Fed-controlled “M2” money stock is up 18% year-over-year. More dollars chasing a steady amount of gold should drive gold prices up (or so the theory goes.)

The relic did begin to move higher in dollar terms in 2016, as you can see in the chart above. Recently, it’s gained steam. Since October 2018, a bar of gold has been better than the S&P 500:

Gold Over Stocks Since October 2018 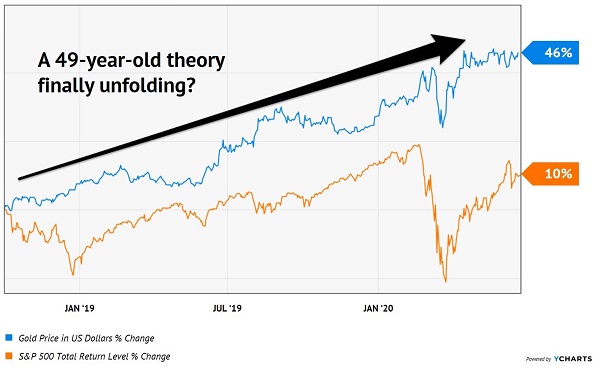 (In other words, the traditional gold bug argument that stocks have only rallied because the Fed has trashed the dollar has some weight lately!)

When these trends really start to move, I like to buy stocks that will likewise really start to move. For example, Royal Gold (RGLD) is one of my favorite “go to” plays on gold. It’s my kind of company—high on assets and cash flows, and light on the number humans that work there!

Royal Gold owns royalty rights for gold exploration. An amazing 70% to 75% of its revenue drops to its bottom-line profits. The firm’s secret? It doesn’t actually mine anything.

The company peddles precious metal (mostly gold) rights, royalties and interests. Royal Gold lets its partners do the heavy lifting (actual mining). Thanks to this “capital light” model, the firm collects an impressive $18.4 million dollars per year per employee (number two in the entire S&P 500 according to S&P CapitalIQ).

As with any good business model, let’s also keep an eye on Royal Gold’s competitors. Fellow precious metal royalty firms Franco Nevada (FNV) and Wheaton Precious Metals (WPM) also mint money when the metals are heading higher. (Gold isn’t the only precious metal that rises with inflation expectations. Silver, platinum and even palladium are all candidate homes for paper money.)

All three pay dividends. At 1% annually we are not going to retire off of these dividends alone. We can, however, double our money in a very short period of time. And hey, in a world where savings accounts pay zero, a modest yield with 100% upside isn’t bad at all:

Dividend Plays on Lots of Dollars 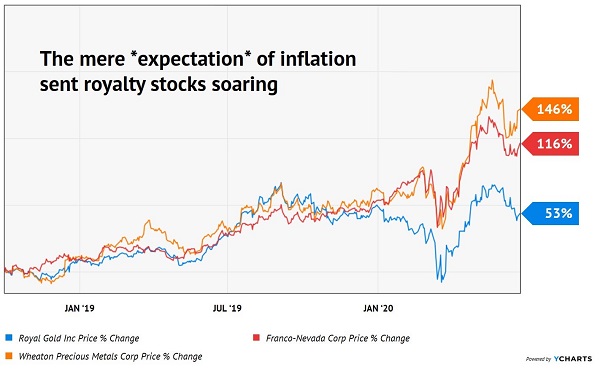 I’ll be keeping an eye on these royalty “streamers” for a potential entry point. For now, I do anticipate the upper hand will shift back towards deflation in the near-term. And that a stock market plunge may make the Fed print more—which may then further set the stage for inflation—and so on.

After all, if 2020 has taught us anything, it is that we should be ready for anything.

These inflationary markets are going to set us up for big gains over the next decade. But we need to make sure we act right now and buy these dream retirement stocks before they run away from us.

Build Your Dream Dividend Retirement with Yields Up to 15%

Many people say they are contrarians, but few actually meet the definition. Even fewer have a publishing company named Contrarian Outlook, dedicated to original dividend coverage!

To be a true contrarian, you often have to run against the herd. Income contrarians, to be specific, buy the handful of investments that are being completely misunderstood and shunned by almost everyone. I’m talking about investments that have big yields and safe dividend streams.

Based on what I’m seeing right now in the markets, I see two major areas of opportunity. Click here and I’ll share more, including my four favorite contrarian investments with yields up to 15%.