This Simple Move Could Give You 486% Returns, 8%+ Dividends

Today we’re going to talk about the biggest threat to your portfolio (and dividends!) you face in 2020.

It’s not a recession. It’s a near-irresistible human impulse—purposely amped up by the financial press—that could lock in big losses for you, or cause you to miss out on a huge gain, like the 486%+ some investors left on the table.

Let’s talk about that now. It starts with all the doom-and-gloom stories you’ve likely read about a looming market crash lately. (They’re hard to miss: you can find at least one on most major news sites every day.)

First off, don’t believe the hype: truth is, there’s a lot of data saying we aren’t anywhere near a downtick, let alone a full-blown once-in-a-lifetime collapse. As I recently explained in “2 Investment Worries to Shrug Off (and Profit From) in 2020,” the numbers suggest the US economy is in a healthy, medium-growth environment: pretty much the opposite of a crash or the bubbly activity that precipitates a crash.

But you’d never know it from the last decade of headlines … even as the stock market has more than tripled.

So why the disconnect between what we’re reading and the facts on the ground? To answer that, we need to take a close look at something called “loss-aversion bias.”

Simply put, it means humans would prefer not to lose money than to make money. In other words, people worry more about losing something they have than thinking about gaining something they’ve never had.

This leads to all sorts of mistakes, like selling at the bottom of a bear market or, worse, never investing in the first place and missing out on a return like this: 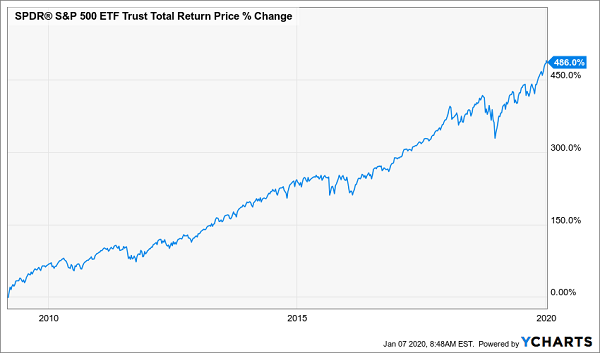 Loss aversion has cost many a fortune, but it’s such a natural part of being human that it’s unavoidable. The key is being aware of, and fighting, the instinct.

This is where the advertising-driven financial press comes in: instead of helping us fight loss aversion, they fuel it. The reason why lies in how the financial media operates.

When print media dominated, advertisers paid a fixed amount for an ad of a certain size, based on the magazine’s subscription base. For instance, say a magazine boasted a million subscribers; advertisers would pay for ads based on how many thousands of readers would likely see that ad.

But with the advent of the Internet, rates for online ads have been going down, so publishers have been compensating by trying to get bigger and bigger audiences. And the only way to do that is to get attention.

The Truth About the 2020 Economy

The antidote to this is sound analysis through an objective analysis of the data. The only problem? This kind of analysis doesn’t get many clicks!

In short, the data looks great. Retail sales are growing faster than they were a year ago; debt rates aren’t rising (suggesting that Americans are spending more, but also spending responsibly). Also, although 2019 was a dud for corporate earnings, there’s a lot of evidence to indicate 2020 will be a year of strong profit growth—one of the strongest of the last decade. So there’s little reason to be afraid of a crash, even after 2019’s great showing.

3 Keys to Beating Loss Aversion (and Pocketing 8%+ Dividends, Too)

As good as the data is, we all know it hurts to lose money. How can you fight that pain and come out a winner in the long run? Here are three keys to doing so—you might be surprised by No. 2:

Of course, successful investors diversify across different asset classes so that when one is down another is hopefully up. It’s Investing 101.

Income often gets less attention, but it’s absolutely critical: a high, steady income stream gives you cash you can use when markets are down to pay your bills or cover off any unexpected costs.

My favorite income source is closed-end funds (CEFs), many of which boast outsized yields of 8%+ and have been beating the market for a decade or more. Take, for instance, the Eaton Vance Tax-Managed Buy-Write Opportunities Fund (ETV). The fund holds blue chip tech favorites like Apple (AAPL), Microsoft (MSFT), Amazon.com (AMZN) and Cisco Systems (CSCO) and pays an outsized 8.8% dividend.

Combined with its 18% total return over the last year, ETV is the kind of fund that provides income security and large returns.

In other words, with CEFs yielding 8%+, you can ride out the storm, happily paying your bills with your dividend income while you wait for the rebound to kick in. Meantime, the average S&P 500 buyer will almost certainly be forced to sell into a downturn, locking in losses, and shriveling their income stream, as they do.

Finally, when the market is crashing, we need to be patient and fight loss aversion with all our strength. Because while markets do crash every once in a while, they recover quickly. Remember this 2008 bloodbath? 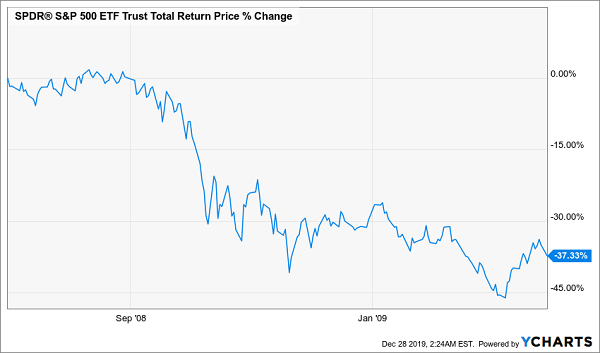 Investors who fought the loss aversion demons had recovered within two years. 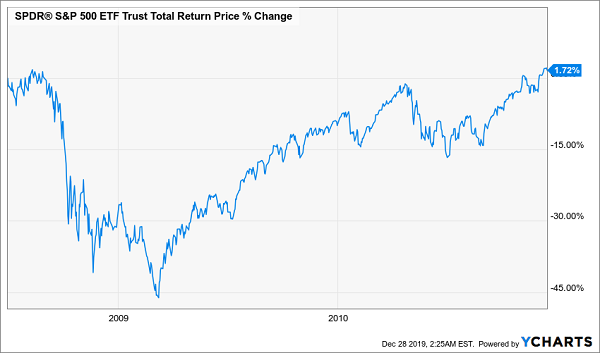 The 2018 bear market was tame by comparison, taking just six months to recover. My prediction? The next one will likely take even less time to bounce back.

When I said there are many CEFs paying  8% and more, I wasn’t kidding around.

Even better, unlike your typical S&P 500 stock, plenty of these funds are cheap right now. By that I mean they trade at 10%+ discounts to net asset value (NAV, or the value of their underlying portfolios). As I write, there are dozens of CEFs with discounts that big—and even bigger.

I’m going to share my 4 very best picks out of this bunch with you right now. Best of all, these 4 incredible income plays yield a massive 8.4%, on average!

In other words, when you put your cash into these 4 funds, you’re essentially getting the historical return of US stocks in cash alone, not to mention price gains.

And speaking of price gains, thanks to their big discounts, I’m fully expecting these funds’ prices to jump 20% by this time next year—not including their huge 8.4% cash payouts!

Full details are waiting for you now: Simply click here and I’ll give you everything I have on these funds: names, tickers, best-buy prices, my complete take on each fund’s manager—the works!