Let’s dive into a brand-new CEF many people are ignoring—and see how we can ride it to some fast gains (and a growing 6.4% dividend).

When a new CEF rolls down the skids, our antennae always go up, because getting into a new fund before anyone else picks up on it is one of the most exciting ways to build wealth (and a rich income stream) in CEFs.

That’s because most CEF investors are conservative by nature, and they tend to shun new funds (even those run by some of the best CEF managers in the business). That results in big discounts we can jump on—and ride to quick 10%, 20% or even 30% gains in short order.

And that’s what the fund we’re going to discuss today could give us—if, of course, it has the management chops to deliver the goods. We’ll answer that question, too.

How We Work New CEFs for Big Gains on the Regular

If you’re a member of my CEF Insider service and this plan sounds familiar, it’s because we’ve already used it to rack up some fast profits. Cast your mind back (only for a second!) to the nightmare days of late March 2020. You may recall that back then we added the BlackRock Science & Technology Trust II (BSTZ), which was only about eight months old at the time (but yielded a tidy 7.3%), to our CEF Insider portfolio.

When we bought, BSTZ’s 7% discount to net asset value (NAV, or the value of the stocks in its portfolio) was about double that of its sister fund, the BlackRock Science & Technology Trust (BST), even though the two CEFs are quite similar. When we sold BSTZ just two months later, we pocketed a nice 21% return.

Almost precisely a year later, on March 26, 2021, we tapped back into BSTZ, which was still pretty new by CEF standards, at just under two years old. This time, the fund was beckoning us with a discount that had slipped to a ridiculous 11.8% (while BST traded at a premium).

That was an obvious mispricing, so we bought BSTZ again. Our reward has been another 22% return since, topping both BST and the NASDAQ: 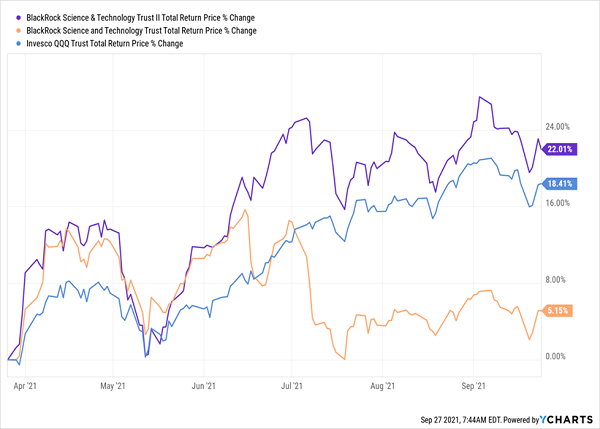 These are the kinds of returns that a new CEF (especially one trading at a big discount) can give us. This story is particularly relevant today because the new fund we’re going to talk about is another tech play, the Neuberger Berman Next Generation Connectivity Fund (NBXG), which was launched in May 2021, pays a 6.4% dividend and trades at an eye-catching 9.6% discount to NAV as I write this.

Plus, while Neuberger Berman does offer some strong CEFs, it isn’t known for tech acumen; its funds mainly focus on municipal bonds, energy companies and real estate. But don’t let that put you off of NBXG—one of its managers, Yan Taw Boon, does have a lot of experience working in tech, including nine years as an engineer at ARM, Cadence, Broadcom and Huawei.

Boon’s background, plus the “Connectivity” in the fund’s name, may tip you off to the fact that NBXG looks to tap into the spread of hyper-fast 5G networks. You’d be right, and management has built a portfolio to do just that, no doubt with an assist from Boon’s “boots on the ground” experience:

A Well-Crafted Play on the Coming 5G Revolution 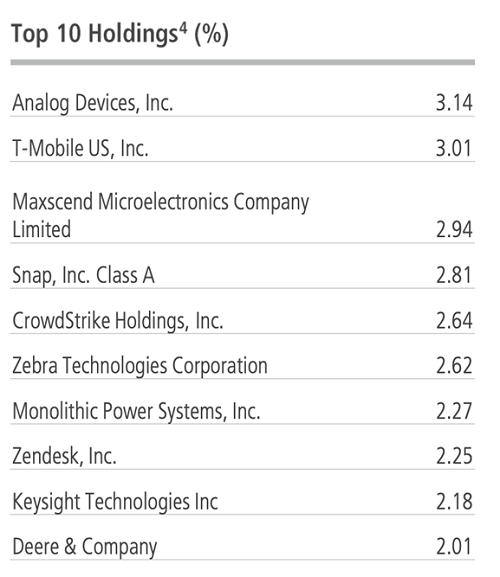 As you can see above, NBXG takes a broad-based approach to 5G, starting with the obvious: shares of telecom companies like T-Mobile US (TMUS). It also holds software makers that focus on communications and connectivity, such as social-media firm Snap Inc. (SNAP) and cloud-security company CrowdStrike (CRWD). Granted, heavy-equipment maker Deere & Co. (DE) may seem an odd fit, but it’s actually well positioned to profit as its machines are required to build 5G infrastructure.

The bottom line? NBXG has the 5G revolution covered from all angles, and it has solid management in place, too. But CEF investors, in their typical fashion, have chosen to overlook all that and get hung up on Neuberger Berman’s lack of prior history with tech. That’s part of the reason why NBXG sports that 9.6% discount, which has actually gotten bigger recently, dropping from a slight premium at inception.

That discount makes particularly little sense when you consider the performance NBXG has put up. It’s still early innings, but as you can see below, NBXG’s portfolio (in orange) has outperformed the SPDR S&P 500 ETF (SPY), in purple, and the telecommunications sector, shown in blue by the performance of the benchmark iShares US Telecommunications ETF (IYZ), which is really the best yardstick for measuring NBXG’s performance. 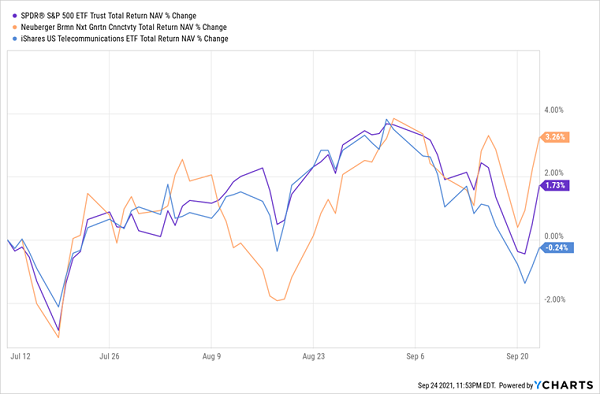 A 6.4% Payout With Growth Ahead

As you can see below, NBXG’s dividend is low by CEF standards, but that makes it safer than the average CEF dividend, and sets it up for growth, too. 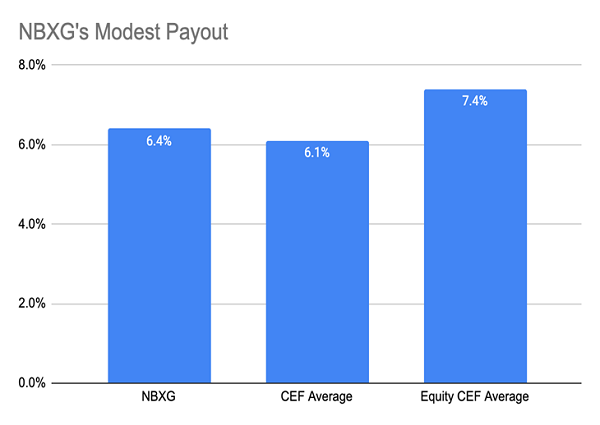 What kind of payout increase can we expect here? Since we don’t have much of a history on NBXG, we can get an idea by looking back at the two BlackRock tech CEFs we just talked about, which have both delivered several hikes over their lifespans, and even special dividends, in the case of BST. 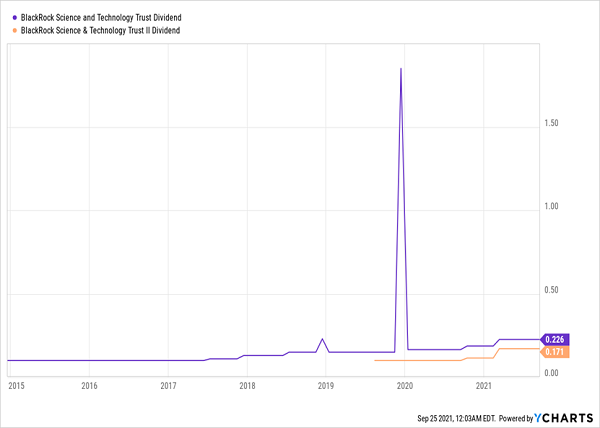 NBXG is too new for us to expect too much in the way of payout hikes in the near term, but given its tech-heavy focus and its outperformance so far, we can certainly expect significant increases over the long haul.

When you buy the 5 CEFs I’m urgently recommending now, you don’t have to wait for payout hikes to give you a bigger income stream—you can get it today with these funds’ huge dividends (which are much higher than NBXG’s 6.4% payout).

As I write, these 5 income machines (which give you exposure to stocks, corporate bonds, real estate investment trusts and municipal bonds) deliver a huge 7.1% average payout, with the highest payer of the bunch yielding an outsized 8%!

Plus, all 5 trade at totally ridiculous discounts. That’s why my latest analysis calls for 20%+ price upside in the next 12 months!

Put it all together and you could easily be looking at a solid 27% in price gains and dividends by this time next year.

Don’t miss your chance to climb aboard before these 5 CEFs start grinding higher. Click right here and I’ll give you the full story on each of them, including names, tickers, best-buy prices and more in a special investor report.