Everything is expensive—except for these dividend payers.

These bargains are left on the board because they fell so far, so fast in 2020 that the market’s subsequence bounce couldn’t quite pull them out of the gutter.

So, yields of 8.9% remain, with 89% price upside attached to them to boot. This “sure bet” sector is consolidating as we speak. Make a note of it, because when this breather wraps up, these dividend stocks could really soar.

We’ll talk specifics on these out-of-favor plays in a moment. First, let’s appreciate why this “free dividend money” is sitting out there for us to scoop up.

One of the safest, reliable ways to make a lot of money in the markets is to buy a commodity when…

“But Brett!” I can hear some readers interrupting. “Aren’t commodities risky?”

As with most of the fun things in life, there is a time and a place for them. When we buy them right, they are the “breakfast beers” of the markets. A fun way to kick off a day of partying, or a dividend trade for that matter—but a technique that is not to be overused. 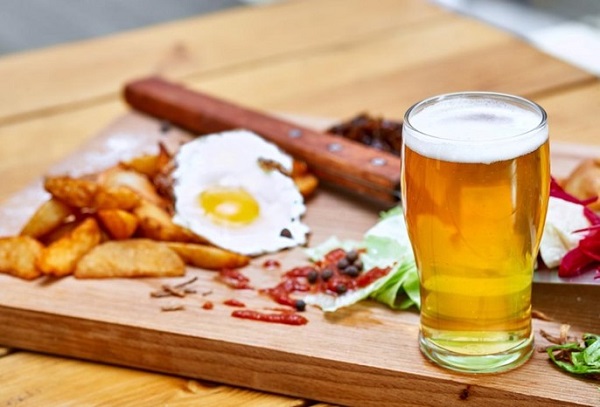 When the price of a commodity drops below its cost of production, the likelihood of a snapback becomes inevitable. Let’s consider energy. Crude oil prices crashed when the world closed up shop last spring. Producers raced to slash output so that they could save every penny. It made sense to do so, because the market for the black goo had evaporated overnight.

But the ultimate cure for low prices was, in fact, low prices. Crude oil futures dropped into negative territory last April, a once-in-a-lifetime event in which producers literally paid recipients to take barrels off of their hands.

A few weeks later, in our May edition of Contrarian Income Report, we compared the situation to 2008:

Nobody wants their oil and natural gas right now, with the world on pause, but let’s check back in two years. Demand will certainly be higher than it is right now, and energy companies will be racing to get production back online!

In late 2008, oil collapsed along with every other asset on the planet. The black goo traded hands for more than $100 per barrel, dropped below $40 in months, and was back over $100 once again within in a few years: 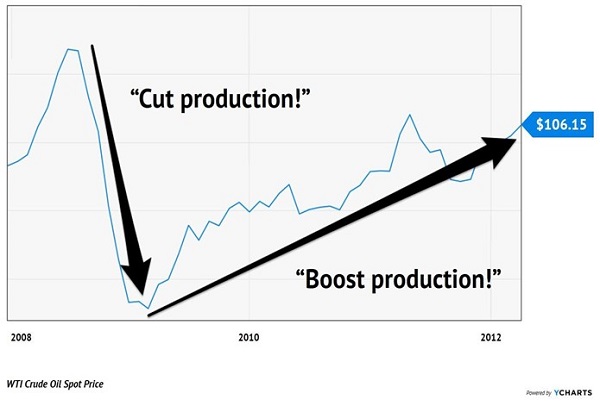 As you can see in our historical example above, the “crash ‘n rally” pattern was a two-step move: 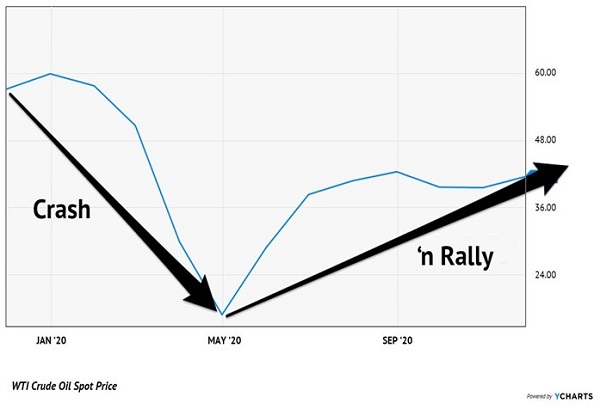 For those of you kicking yourselves for not listening to our rally cry in last May’s CIR, don’t be too hard on yourself. First, as a guy who lives in a house with four female bosses (wife, two daughters and dog), I am used to yammering in my own vacuum.

And second, well, we’ve got at least another year or two to go until oil prices fully recover. So, let’s go make some dividend money while we can.

Energy “toll bridges” are my favorite way to play this rally pattern. I prefer them because these companies boast:

Let’s rewind to the 2008 to 2012 timeframe we looked at earlier. This time, instead of buying a hypothetical barrel of WTI crude oil on January 1, 2008, we are going to have our past income selves purchase toll bridge ONEOK (OKE) instead. “Oh, what poor timing!” we may have thought, and it was for a while. But our OKE shares proved to be more than OK by the time the dust settled, returning a total of 132% while crude merely crashed and recovered:

Better Than OK Returns for OKE 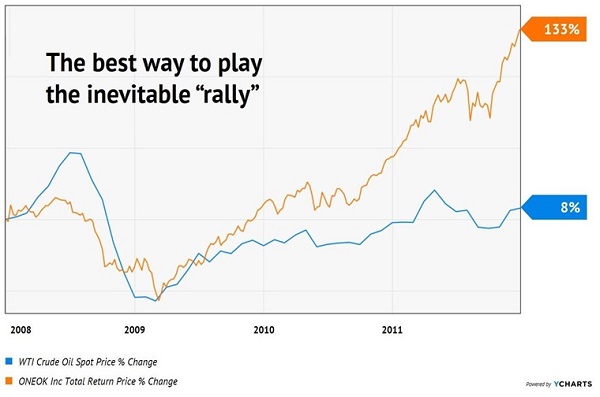 This time around, we bought closer to the bottom than the top—the benefit of buying after a 75%+ drop! Oil was still swirling lower but OKE shares found a foothold soon after we purchased them. They’ve already rallied 55% for us since our April purchase: 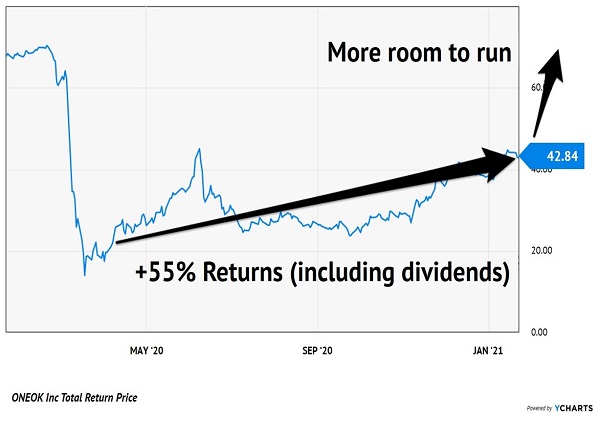 But there’s more to come! Remember, the last time oil crashed ‘n rallied, OKE returned 133%. When the current correction in oil plays out, OKE will be ready to run again. In the meantime, let’s enjoy its 8.9% dividend while we wait.

Would I buy anything else while we sit on our hands and wait for OKE and its energy toll bridge brethren?

YES. Here are some hot dividend plays that are buyable right now. Give me four minutes, and I’ll show you how to identify stocks like these that will 4X the yield on your retirement portfolio.