December might be the traditional season of generosity for most, but not for energy master limited partnerships (MLPs). This high-income area of the market tends to wait until January rolls around to get into the giving spirit, with many of the industry’s names doling out distribution hikes a couple weeks after the New Year.

Investors looking to jump into MLPs, then, may want to get into the seven stocks I’m about to highlight – all of which yield between 5% and 8% – before they up the ante on their regular payouts.

A host of MLPs tend to wait until after the champagne has been uncorked and the bowl games have been played to announce distribution hikes. In many cases, these announcements come well ahead of their quarterly earnings reports.

But 2018 will be a bit different from the past few years in that a couple of names won’t be on the list. For one, Sunoco Logistics Partners – which in the past has raised distributions in January – is out of the fray, having been absorbed by Energy Transfer Partners, LP (ETP) in a merger completed in April 2017. ONEOK Partners won’t on this year’s list, either, with parent ONEOK (OKE) buying out all remaining shares it didn’t already own during the summer.

But there’s still plenty of potential for January 2018. Today, I’m going to show you seven MLPs that should sweeten the pot with distribution hikes within the first few weeks of the new year.

The MLP’s units have dipped by more than 10% so far in 2017, affected in part by damage from Hurricane Harvey. Still, the company’s third-quarter earnings and revenues grew year-over-year, and it has announced a number of projects – mostly expansions and extensions of existing assets – that should fuel growth in the coming years.

Distribution hikes are fairly commonplace for Magellan, which has been upping its quarterly payout on a quarterly basis for years. Its next announcement should come in the final days of January, on a distribution that should be paid out in early February.

Magellan Midstream Partners (MMP) Should Extend Its Streak This January 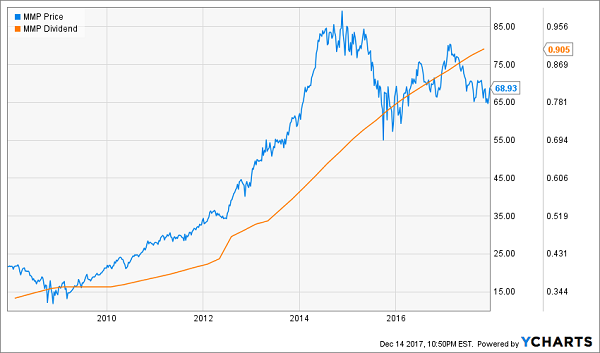 Pittsburgh-headquartered EQT Midstream Partners, LP (EQM) also hikes its distribution every quarter, and has been doing so at a rapid clip. Its checks have grown roughly 70% in just the past three years, including a 4.8% improvement to the November payout. Looking forward, the company is targeting 15%-20% distribution growth for 2018, at a long-term coverage ratio of 110%.

EQT Midstream is a natural gas gathering, transporting and storing operator in Pennsylvania, West Virginia and Ohio, with access to the Marcellus, Upper Devonian and Utica shales. Again, the company has had a slightly down year, off 5% in 2017, but issued a strong Q3 report that included a 17% jump in third-quarter operating revenues.

Up next? Likely, another distribution-rate hike, sometime in mid- to late January.

Enterprise Products Partners, LP (EPD) – which boasts nearly 20,000 miles of natural gas pipelines and almost 25,000 miles of NGL, petrochemical and refined products pipelines – is one of the largest publicly traded energy MLPs in the nation. It also has been one of the busiest this year. The company is tracking $4.5 billion in project completions for 2017, with another $5 billion in expansion projects coming online over the next two years.

And it has done all that while improving its leverage ratio year-over-year.

The strong operational performance has given it a leg up on many other mLPs, with just 3% losses year-to-date versus a 14% dip for the Alerian MLP ETF (AMLP). And the improved financial situation means only more good things for the distribution, which Enterprise Products Partners has lifted for 53 consecutive quarters. The next hike should come sometime in the first week of January.

Enterprise Products (EPD): More Than a Decade of Distribution Dependability 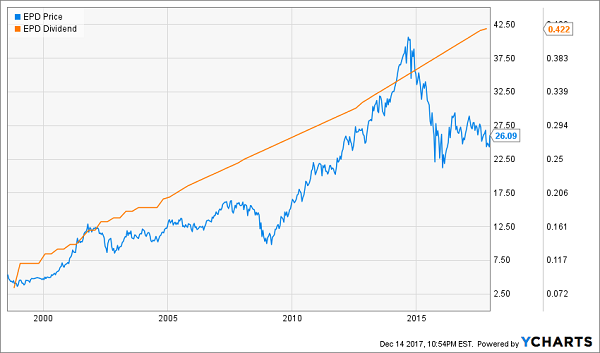 Transmontaigne Partners, LP (TLP) – a midstream operator in petroleum and other liquid products – stands out from other names on this list in that its streak of distribution increases isn’t all that long. The company’s payout stagnated in 2014 and 2015 before returning to growth in 2016. Those obviously were a couple difficult years for the energy industry, though TLP faced an additional setback as its CEO also retired in October 2014.

The company has bounced back since bottoming in late 2015, and even recorded a record second quarter that saw net income exploded 40% higher year-over-year. That said, Transmontaigne did leave a few investors scratching their heads around the third-quarter report with a year-over-year profit decline, an oddly scheduled conference call that came days after the report, and the cancellation of a common-unit issuance the very same day it was announced.

Still, investors have every reason to believe TLP will improve upon its distribution again next quarter. The declaration date should come sometime in the middle of January.

Holly Energy Partners, LP (HEP), on the other hand, has been improving upon its quarterly distribution every quarter since the Delaware limited partnership came public in 2004.

Holly Energy Partners is a petroleum product and crude oil midstream company that operates across the Southwest, Midwest, Northwest and Rocky Mountain region. Its assets include pipelines, terminals and tankage. Importantly, HEP is in the midst of a big ownership structure change in which parent company HollyFrontier (HFC) has traded in its incentive distribution rights and general partnership units for limited partner units, which will ease Holly Energy Partners’ cost of capital by 4 percentage points.

The hoped-for result is more flexibility to seek out new avenues of growth. Meanwhile, though, HEP investors should feel confident that January will bring with it another distribution increase. Look for an announcement to come in the final two weeks of the month.

The company has put out a couple of massive earnings misses this past year, resulting in one of the worst performances on this list of MLPs – a 20% year-to-date decline. But Western Gas did deliver a somewhat promising 2018 outlook that included “significant Adjusted EBITDA growth,” according to CEO Benjamin Fink – though that’s based on several assumptions, including that Mentone Trains I and II come online sometime in the second half of next year.

The MLP has been delivering small but consistent quarterly distribution hikes for years, and 2018 should be no different. Expect that to start with a mid-January announcement. 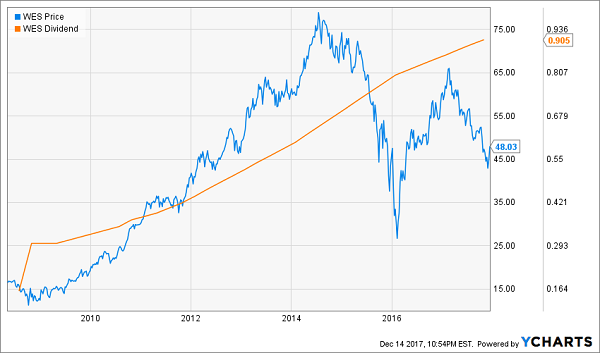 Genesis Energy, LP (GEL) very well may increase its distribution sometime in January, but if it does, it’s sure to be met with some Bronx cheers.

Genesis Energy provides midstream services primarily in the Gulf Coast region – everything from refineries and storage tanks to pipelines and trucks, dealing in oil, natural gas, CO2 and other industrial gases. And just a couple months ago, it slashed its quarterly payout by a whopping 31%.

Genesis’ payout downfall came after several years of a hyper-aggressive acquisition strategy that it could barely afford, at which point it ran head-first into the energy crash of 2014. Its leverage skyrocketed, with net-debt-to-EBITDA ratio reaching above 13 at one point. The company continued its M&A ways, however, even closing on a $1.33 billion all-cash deal to buy Tronox’s alkali operations in September. But the rubber hit the road in October 2017, when the company hacked away at its distribution.

That said, the company made a stated goal of increasing its distribution by at least a penny per quarter, starting in 2018. Granted, it’ll take years to get back to its 2017 payout level at that rate, but it’s better than nothing. If past announcements are any indication, GEL will resume distribution growth with an announcement in the first two weeks of 2017.

MLPs can generate high and growing yields, but they can also generate screaming headaches come tax time thanks to their differently taxed distributions and onerous K-1 forms.

While I do like to look in corners of the income world that aren’t combed over as regularly, MLPs are a tax nightmare. However, there are three other high-yield classes in particular that I like today. You won’t hear about them on CNBC, or read about them in the Wall Street Journal, because they don’t buy advertising like Fidelity and other firms.