Protecting Our Retirement Portfolios in Times of War

We’ll talk about protecting our retirement portfolios—and finding safe dividend stocks—in a moment. But first, let’s appreciate the Ukrainian woman who offered sunflower seeds to Russian soldiers in her neighborhood.

You’re occupants.
You’re fascists.
Take these seeds and put them in your pocket
So at least sunflowers will grow when you all lie down here.

She gave the soldiers a full minute of nonstop verbal barrage. You can watch it with captions here.

Warning, her language is not safe for work—which makes the interaction all the more special. (Hat tip to Ukraine’s Twitter feed for the post. Their government has put on a master class in social media marketing over the past week.)

It’s hard to see how this conflict ends quickly. If things take another turn for the worse, we’ll have a few twists and turns to navigate.

Until recently, us dividend investors have dealt with clearer variables. The Federal Reserve has been the ultimate catalyst for stock prices. Geopolitical tensions, virus numbers and domestic political unrest couldn’t weigh stocks down while the Fed printed money.

But Jay Powell’s cash creation ignited inflation. Prices were already rising at their fastest levels in 40 years before we were faced with energy and wheat disruptions.

(I imagine Russian President Putin factored US inflation plus the upcoming midterm elections into his invasion math. He bet that the US and Europe would leave Russian energy alone. Things are changing by the minute, but Germany’s decision not to certify the Nord Stream 2 pipeline suggests he miscalculated.)

Prior to Russia’s invasion, the stock market was getting trashed simply in anticipation that the Fed would soon shrink its balance sheet and raise rates. Less liquidity is typically bearish for asset prices.

The Opposite of a Bull Market Is… 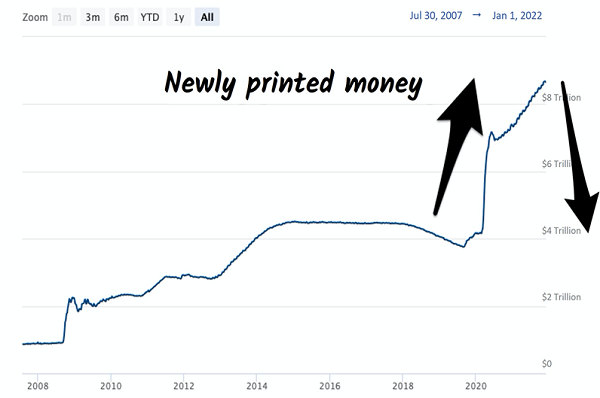 Fed tightening became such a threat that, sadly, a land war in Europe was viewed as a bullish development. The two-year Treasury rate, which typically leads the Fed’s benchmark rate, sank earlier this week. Traders are betting on a more sanguine Fed this spring.

In other words, Powell “has our back” once again as investors. The notion that the Fed will ride in and rescue asset prices is back in play.

But the return of the famous Fed put could be fleeting. If Powell kicks the rate-hike can down the road, he could be under some real political heat this summer. Midterm elections are coming up in November, and oh by the way, Powell’s reappointment as Fed chair still hasn’t been officially confirmed.

It’s supposed to be a rubber stamp. But it’s not on the paper yet. And we’ve seen crazier things happen over the past two years.

My point is that Powell is under serious pressure to get inflation under control before November. This means the Fed must get hawkish soon.

Now my guess is that they’ll raise rates until they break the economy. Which means a recession in 2023 is a possible monetary end game here.

Interest rates don’t usually rise during recessions, they decline. This would be bullish for bond prices. It’s why we contrarians should be patient with our bond funds. They have struggled with higher long rates, but there’s no reason to sell them in a panic here.

Monthly dividend payers, in particular, should do quite well. These elite bond funds are cheap today largely because the market has priced in multiple rate hikes. If that doesn’t happen, these 7%+ yields will bounce back quickly.