For the past few weeks, I’ve been drawing up a roadmap of how income investors like us can fend off inflation’s impending march.

But they all center around one central theme you can find in just about any corner of the market: dividend growth. Show me a payout that is heading higher, and I’ll point you to a stock price that is likely to follow.

We’ve got a big summer ahead, with 48 dividend raises on the way! Here’s why these stocks are must-watches for the months ahead.

Why We All Need Bigger Dividends Over Time

Right now, if you were to lock in current rates for some of the market’s most popular investments, you’d lock in a retirement devoid of breathing room and full of financial anxiety.

Let’s say you had a million-dollar nest egg to plunk down on whatever you wanted:

Meanwhile, every day, inflation is eating into the spending power of the few meager dollars you’re earning from each of those investments. But your yield-on-cost for Treasuries won’t change, and while the payouts on the S&P 500 and VYM do improve over time, both have many components that boast little or even no dividend growth.

We need to do better, and we can, by stacking our portfolio with reliable, generous income raisers.

The “dividend magnet” is one of my favorite market effects—and the other reason why it’s so important to prioritize dividend growth. 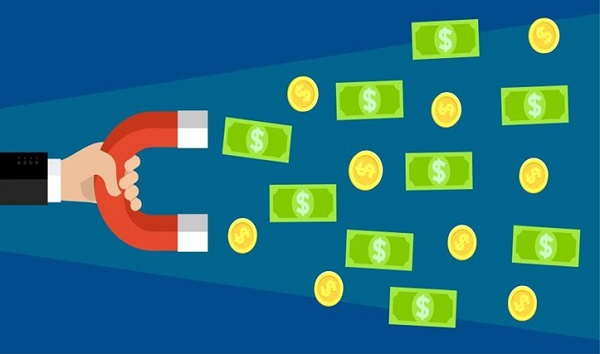 Some “first-level” investors love to say that the start of dividends is the end of growth—that a dividend-paying company has run out of ways to innovate, so they’re tossing cash to investors in a desperate move to maintain shareholder interest.

But in reality? A new dividend program is a statement of confidence and financial stability. A company that pays dividends says, “We know we’re going to continue to be profitable, and we’re going to share the riches with you along the way.” When it hikes those dividends, a company is doubling down on that sentiment, telling investors to expect even better financial performance ahead.

And investors typically take those signals as a bright, green light.

Just consider Starbucks (SBUX), which started paying dividends in 2010, then proceeded to nearly triple the S&P 500 over the next decade-plus. 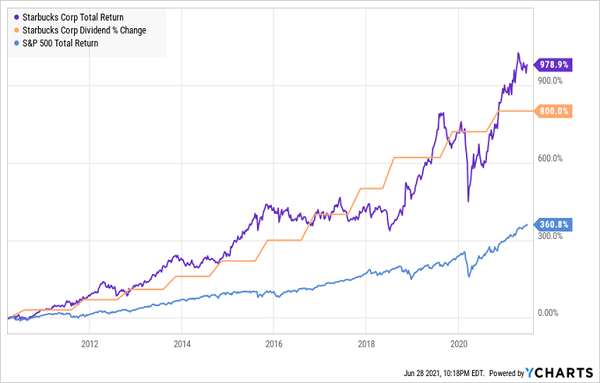 In other words, dividend growers aren’t just about improving our yield over time. We’re looking for the next great price-return machines, too!

Where to Start Your Search

Third-quarter earnings season is on deck, and if there’s one thing corporate America is, it’s predictable.

So here, I’ve laid out nearly 50 companies that are largely expected to up the ante over the next three months. I’ve separated them into four groups: well-known blue chips, lesser-known income gems, Dividend Aristocrats and “rapid-fire” payout raisers that like to turn up the dial more than once a year. (Note: Bold = high yield of 4%-plus.)

MSCI’s (MSCI) place is typically in the background, with its thousands upon thousands of indexes helping to power many of the world’s premiere funds. It currently is duking it out with FTSE Russell for America’s No. 2 spot in powering ETFs, while it’s a runaway No. 1 in Europe. UBS estimates that funds linked to MSCI indexes have some $1.3 trillion in assets under management, and says AUM has reached all-time highs for seven consecutive months.

Growth of markets here and abroad mean more demand for MSCI’s products. That has fueled share growth so rapid its dividend can hardly keep up. Shares are up more than 630% over the past five years, dwarfing its otherwise impressive 179% dividend growth over the same time.

MSCI has been doling out double-digit hikes for years like clockwork, including a nearly 15% raise in 2020. MSCI typically announces its dividend increases late in August, and there’s no reason to expect its generosity to suddenly disappear this year. 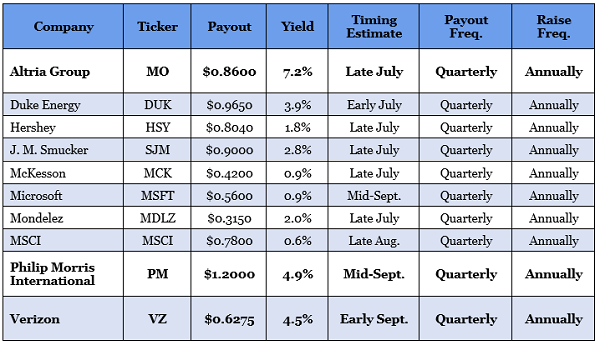 The 0.5% yield on Landstar System makes money market accounts look generous. But once in a while, a headline yield isn’t quite what it seems.

And when that’s the case, special dividends are usually involved.

Take, for instance, Landstar, a truck broker that primarily operates in the U.S., with small exposure to intermodal and global air and ocean transport. This is a business that will naturally ebb and flow with the American economy, and so while the top and bottom lines are bound to grow over time, it’s not always in a perfectly smooth line.

Rather than overpromise and underdeliver by stretching to maintain an unsustainable regular dividend, LSTR doles out a more modest quarterly payout … then regularly tosses out fat special dividends at the start of most years. It kicked off 2021 with a $2-per-share special distribution that more than triples its annual yield to nearly 1.8%.

OK. You’re not getting rich quick that way, but a combination of big special dividends and a growing regular distribution (2020 saw a 13.5% bump to 21 cents per share), LSTR is worth monitoring for dividend-growth investors. If you do decide to keep watch on Landstar, late July is when it’s likely to announce its next dividend move. 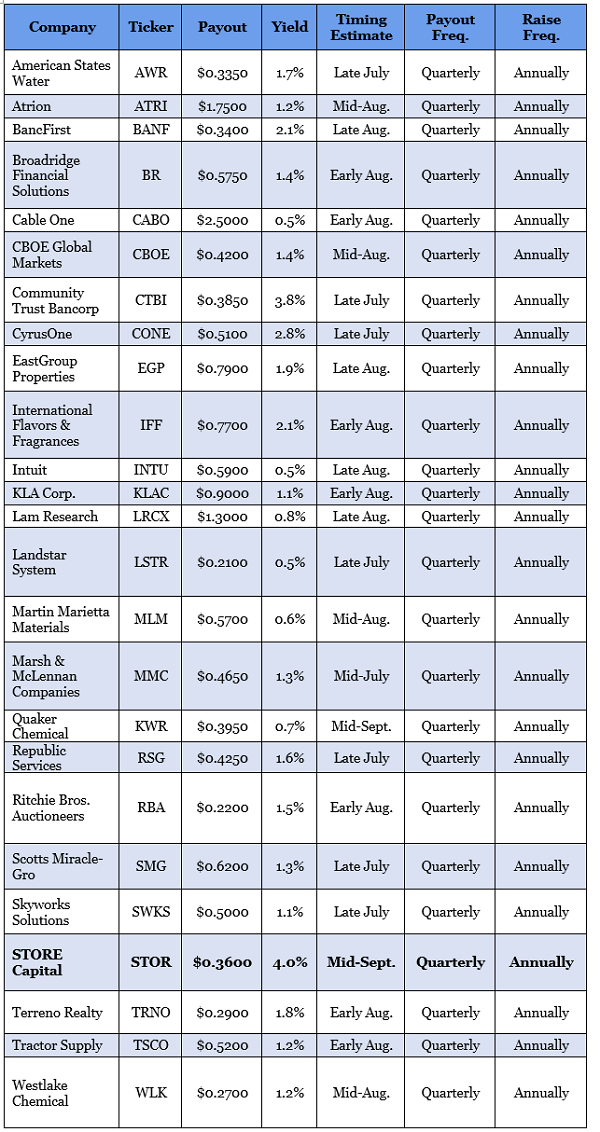 Dividend Aristocrats have a reputation for slow dividend growth, and for an understandable reason. If you’ve been raising your payout every year for at least a quarter-century, chances are that it hasn’t been completely funded by equal profit growth along the way.

Instead, it’s likelier that, especially as the years have rolled on, that your payout ratio has creeped a little bit higher, year after year, to keep shareholders happy.

It’s important to temper our expectations, then, but we can find decent dividend growth in at least a few Aristocrats. Illinois Tool Works (ITW) is among them.

ITW produces and provides a range of tools and systems, from construction products to food equipment to polymers and fluids to measurement electronics. Unsurprisingly, ITW’s business can be cyclical, but its exceptional product diversification keeps its wares in demand … and keeps shareholders paid.

Illinois Tool Works has improved its dividend for 46 consecutive years, including a 6%-plus hike to $1.14 per share announced last August. That came despite what ended up being an understandable down year for ITW, so we’ll all be curious to see what the company pulls out of its hat later this summer. 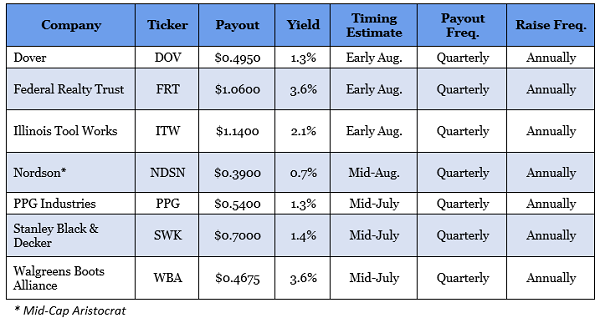 Here and there, you’ll find a few special companies that aren’t content to put their generosity on display all of once per year. Instead, they top up the payout every six months, or even every quarter.

For the most part, these are the usual suspects. Real estate investment trusts (REITs). Master limited partnerships (MLPs). Companies that are already required to share their wealth.

But there’s a curveball or two in this lot.

Take Microchip Technology (MCHP), which as you might have guessed from the name, is in the semiconductor industry. Its microcontrollers, radio frequency devices, analog devices and other products serve a host of industries, from aerospace and defense to ethernet to technologies that have to function in extremely high temperatures.

MCHP is a lightweight among its rapid-dividend-growth peers, at just more than 1% in annual yield. But its combination of business growth and income expansion is formidable. Not only did the company boost its payout by more than 12% over the past year, but it did so via greater payouts each and every quarter during that time, giving investors a slight compounding advantage over companies that only announce dividend hikes each year.

The next declaration should come in early August, but if you happen to miss it, don’t fret—there’s always another one right around the bend. 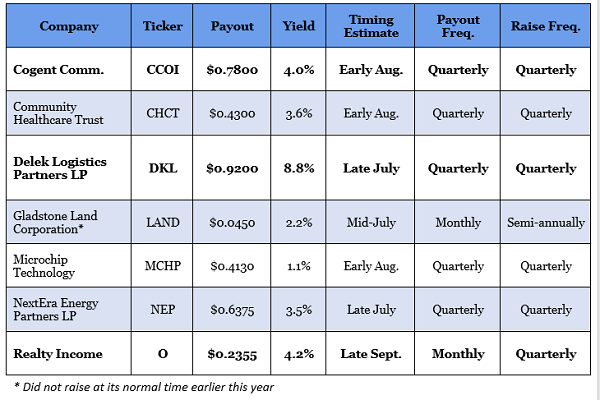 Valuation is becoming a real concern with several of the stocks outlined above, so consider them stocks to monitor for better opportunities later.

But you can still put this income-printing strategy to work today with a simple-to-manage, easy-to-understand group of just 7 specific tickers that can deliver a steady 15% every year—for life!

These seven stout income picks follow the exact same playbook as the likes of ITW and MCHP, growing their businesses and their dividends, side by side.

In fact, they all have one critical thing in common: They’re quietly handing smart investors growing income streams plus annual returns of 15%, 17%, 21% or more!

And they’re trading at far more attractive prices—a value proposition that will further boost our price returns over time.

You can get the full breakdown on each of these 7 standout buys within seconds. Click here to get my complete research: names, tickers and a full breakdown of their operations—everything you need to profit with confidence.