The broader market, as defined by the S&P 500, has rallied like crazy. But don’t worry, you haven’t “missed out” on anything. The rally has been carried by large, and largely non-dividend paying stocks!

Most income plays are just now getting up off the mat. We’ll discuss one of my favorites today.

We saw this in late 2008, when oil collapsed along with every other asset on the planet. The black goo traded hands for more than $100 per barrel, dropped below $40 in months, and was back over $100 once again within a few years: 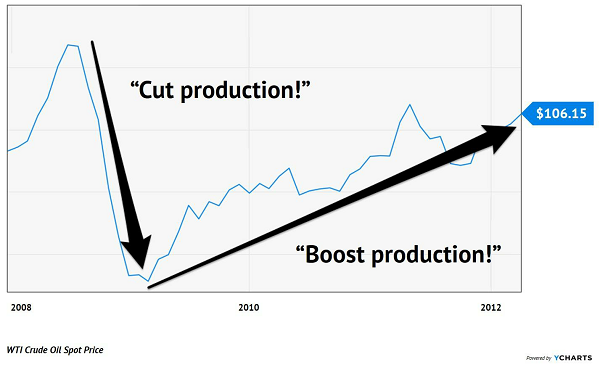 But recoveries never happen in a straight line, do they?

Right now, many investors are gambling that global consumers will quickly jump back into their cars, and onto planes, and otherwise drive up demand for oil and other fuels.

Maybe. Eventually. But probably not as rapidly as Wall Street has priced in.

“If we look at the rally we’ve seen in crude oil prices, it’s been amazing, but the big uncertainty is if you look at refinery margins, they are very weak across the board across all regions,” Warren Patterson, head of commodities strategy at ING, recently told CNBC. “And what that suggests is that maybe demand isn’t recovering as quickly as many had anticipated, or at least it’s not keeping up with the move higher that we’ve seen in crude oil prices.”

Refineries purchase oil from producers and turn it into gasoline, diesel fuel, heating oil and other end products. Low energy prices are no problem because these firms simply buy their materials low and later sell their finished product at some higher price. In fact, since cheap oil lets them sell their end products for less, demand for these finished goods gets a boost.

If oil prices are rising ahead of demand, however, that not only squeezes refiner margins—it then forces refiners to buy less oil, which in turn drives oil prices back down.

Ideally, we could see a situation in which refiners give up some of their recent gains before oil drops again. That would present us with a golden opportunity to pick up high-quality refiners at great yields right before demand and margins (and stock prices!) pick back up.

Here are three energy dividends to put on our shopping list for dip-buying:

I think it’s difficult to call any energy company’s dividend perfectly safe given what we’ve seen over the past five or six years. But it’s clear Chevron will move heaven and earth to preserve its payout, which has been growing for 33 consecutive years.

Chevron, of course, isn’t a pure-play refiner. It’s an integrated major whose downstream operations act almost like a buffer against low oil prices. But how much its refineries play into the profit picture can vary wildly. For instance, last year’s Q1 saw Upstream generate $3.1 billion in profits while Downstream earned just $252 million. But in 2020’s Q1, Upstream generated $2.9 billion in earnings while Downstream contributed $1.1 billion, driving year-over-year growth in profits.

But refining’s contributions might be more muted in the short-term, with the refined products crack spread—the difference between how much refiners are purchasing the raw commodity for and selling refined product for—at a thin $11 per barrel; it was about $21 a year ago.

The beauty of Chevron, of course, is that its many arms allow it to make money, and that management has adopted a fairly flexible financial model that’s helping it weather the current energy storm. But it has run far too hot (almost 90%) out of the March lows. That’s starting to spook analysts who have plenty of praise for Chevron’s operations, but complaints about its price.

Chevron’s Recovery Is Pricing In Too Much Hope, Not Enough Substance 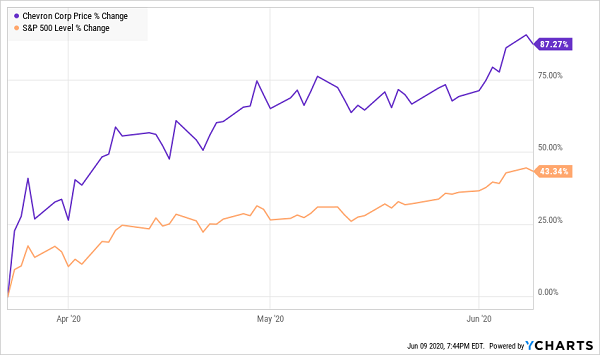 CVX is a Dividend Aristocrat doling out 5% in cash. That’s exceedingly rare.

But 5%, while good, isn’t great in the grand scheme of retirement planning. You ideally should be targeting yields around 8%-9%. Still we might be able to squeeze out better prices and dividends from Chevron if we’re patient.

HollyFrontier (HFC) is a Dallas-based refiner that sports 457,000 barrels per day of crude oil processing capacity across its various facilities in five states. It can also produce 34,000 barrels per day of lubricant, and it also holds 57% interest in Holly Energy Partners LP (HEP), a master limited partnership (MLP) that transports and stores crude oil and petroleum products.

HollyFrontier also is spending to expand its small renewables business. HFC recently announced that it would be converting a refinery in Cheyenne, Wyoming, into a renewable diesel production facility. Factoring in that and a previously announced unit to be built at its Artesia, New Mexico, refinery, HollyFrontier should be able to produce more than 200 million gallons of renewable diesel annually.

All told, HFC will be spending up to $750 million on its renewables business—expenditures it’s committing to despite reducing its overall capex earlier this year. That speaks volumes about renewables’ potential; HollyFrontier says it expects an aggregate internal rate of return of 20% to 30% on these investments.

That’s encouraging. So is the fact that HFC increased its dividend for the first time in years in 2019. But like Chevron, a scorching run of nearly 90% has left shares frothy, even if just in the short run.

If Refined Products Demand Doesn’t Pick Up, This Could Get Bumpy 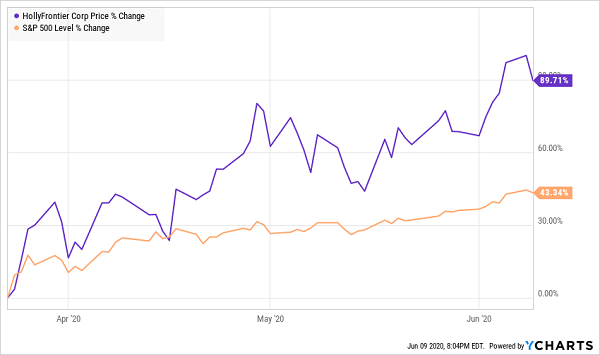 Again, we can be patient here. No income investor needs to pull a hamstring stretching for sub-4% yields in the energy patch.

In 2012, ConocoPhillips (COP) spun off its midstream and downstream operations in the form of Phillips 66 (PSX). A year later, Phillips 66 pulled off its own spinoff, unloading its pipelines, terminals and other assets into Phillips 66 Partners LP (PSXP).

What remains is a refining business whose 13 facilities can produce 2.2 million barrels of crude oil daily; a marketing segment selling fuel products via 7,550 locations under the Phillips 66, Conoco and 76 brands; midstream operations including PSXP as well as a 50% interest in DCP Midstream LLC; and chemicals operations thanks to a 50% joint venture interest in Chevron Phillips Chemical Company.

If the argument against the refiners is they’ve run too far, too fast, PSX is every bit as guilty if not more than CVX and HFC, more than doubling off the March trench.

Can PSX Justify This Launch? 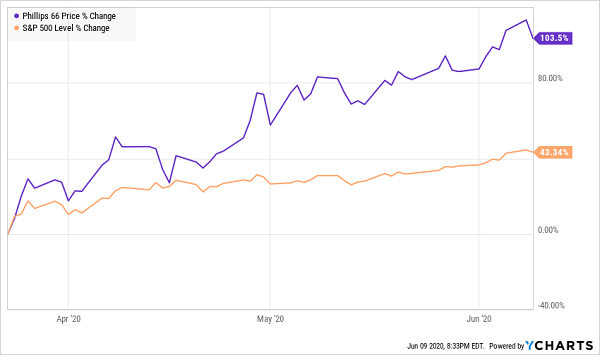 Phillips 66 has hardly gone unscathed. It’s still off 23% year-to-date despite that bounce, which shows you just how deep the March cut was. And the company dug in deep, early: The company suspended share buybacks in March, reduced capital spending and operating costs, issued $1 billion in bonds and secured a $2 billion loan facility, all in the name of liquidity.

The worst certainly is in the rear-view, but a cold slap of reality could scare early dip-buyers into taking profits. Here’s hoping, anyway: PSX is choice goods.

Phillips 66’s diverse holdings help shield it from any one particular shock, and its midstream and marketing operations are capable cash-flow generators that have funded a nicely growing payout. While PSX’s dividend growth has been put on pause, it had been expanding at a 12%-plus clip over the previous five years.

If U.S. gas demand returns to 92% of normal by 2020’s end, as Morgan Stanley analyst Benny Wong predicts, PSX could be a prime beneficiary.

The one lesson that the past two months have taught us is that waiting for the next dip can be counterproductive and downright painful.

Many investors stared at rapidly rising prices in disbelief, convincing themselves that stocks would suffer one more big dip they could buy…only to watch yields go from amazing, to pretty good, to downright pedestrian.

But if you’re looking for sky-high yields right here, right now, then now’s the time to act on my “Dream Retirement Picks.”

Scores of investors followed the conventional wisdom on the market’s way down, bailing out of many of their holdings to double down on so-called safe blue chips.

But they bought into the narrative and forgot the math.

Nothing is safe about generating that level of income in retirement.

The good news is: It’s not too late to snap up yields that are several times larger—as long as you’re willing to kick Wall Street’s conventional wisdom to the curb.

Go on the attack today with my “Dream Retirement Picks.” This three-part set of buys AND sells will help you clean house and put you ahead of your original retirement timeline. I’ll show you…

These three steps, which you can put to work right away, will transform any underperforming, income-light retirement into a perennial cash machine that will deliver the goods in any market cycle.

…actually, stop. You don’t have to imagine it. It’s real, tangible income that you can expect from one of these dividend dynamos if you jump in at my buy-under price.

Every day you wait to take action could be another month of retirement that goes unfunded. Click here NOW to start overhauling your portfolio with my Dream Retirement picks paying up to 15%.