Right now, there are two closed-end funds (CEFs) you need to sell immediately—or steer clear of if you don’t already own them.

Before I reveal them, I want to explain the unmistakable sell signal both are showing as I write this. You can easily use it to “crash-test” the CEFs in your own portfolio, or spot CEF bargains.

I’m talking about the difference between the fund’s market price and per-share net asset value, or NAV (which is just another way of saying the value of the CEF’s holdings).

CEFs usually trade at a discount to NAV, and if you’re a subscriber to my CEF Insider service, you know we’ve banked some impressive returns by waiting for those discounts to get ridiculously wide, buying, then holding on as the discount reverts to normal, pushing the share price higher as it does.

That’s a proven way to build wealth in CEFs, but there’s one problem: sometimes folks completely ignore it, or forget to sell when the discount gets too narrow, or even flips to a premium. In those cases, the “snap back” to the downside can wipe out your profits!

And bear in mind that a premium is a dead-obvious signal that investors are overpaying for a fund.

These days, too many investors are ignoring this warning sign. That’s a big mistake, especially now, with fears like the trade war making the market cautious. That caution is seeping into the CEF world, meaning those overpriced funds will soon face a reckoning.

The GAMCO Global Gold Natural Resources & Income Fund (GGN) invests 80% of its portfolio in companies in the gold and natural resources sectors. Top holdings include gold miners Barrick Gold (GOLD), Franco-Nevada (FNV) and Newmont Goldcorp (NEM), as well as other natural-resource stocks, like Exxon Mobil (XOM).The fund then seeks to generate income by selling covered-call options on the stocks it holds.

The problem? GGN’s narrow focus on gold means it’s really just a speculation that the yellow metal will go up. And it’s not even good at that!

GGN’s track record is miserable: its NAV return has fallen over the last five years (including dividends—and consider that this fund yields an outsized 13.7% now), even after its modest recovery in 2019: 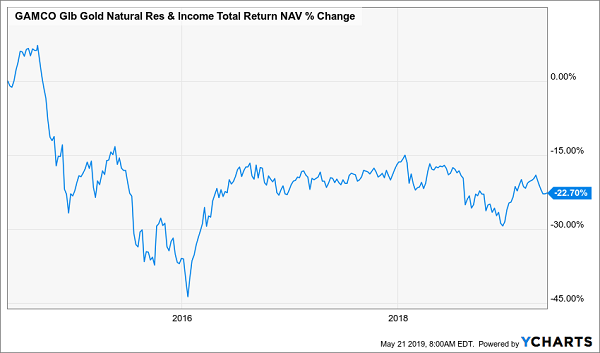 In part, this is understandable, since gold itself is down over the last five years, but gold prices have fared much better, being down just 3.4% over this period, as you can see in orange below: 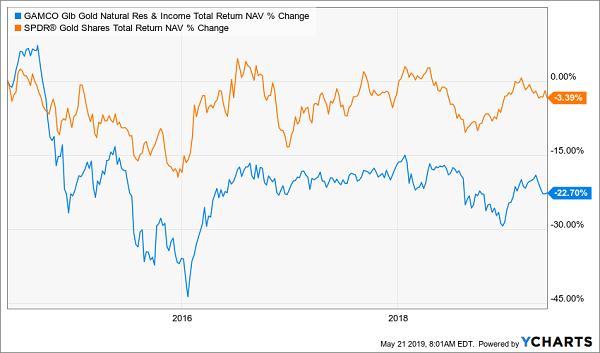 Since GGN’s approach to investing in (and selling options on) gold companies isn’t working, you’d at least expect this fund to trade at a wide discount.

Remember that 13.7% yield? That is driving income-hungry investors down a dangerous path, because GGN cannot keep up its payments with its negative returns. And there’s plenty of precedence for a dividend cut, since it slashed payouts in 2015 and again in 2017, which means it’s overdue for another payout cut in 2019.

Still, investors have driven this one to a premium—and we’re getting close to the premium spikes GGN has had in the past, which have been a sign that it’s about to fall:

GGN: About to Hit the Wall 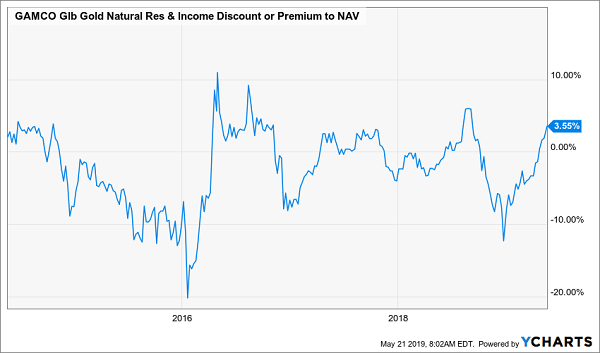 This huge premium isn’t the result of market-crushing performance. While GGN’s 7.4% year-to-date return beats that of gold itself, that’s mainly because GGN’s portfolio fell further than gold in late 2018.

Much more distressing is this chart, showing the fund’s market-price-based total return (in orange) dusting its NAV return (in blue):

Overpaying for a Meager Return 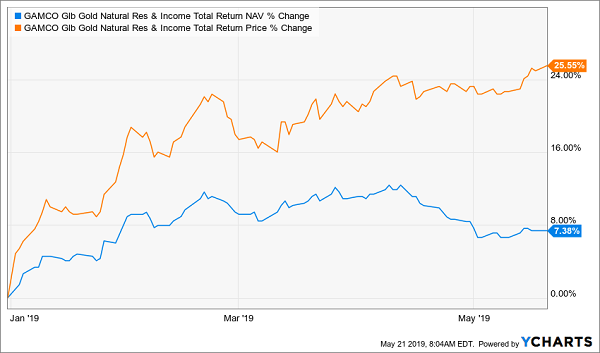 A good fund with a strong track record can still be worth buying, even after its price shoots up 25.6% and its NAV gains just 7.4%. But that’s not the case with a fund that’s down over half a decade, like GGN. This is a CEF to run away from.

Dangerous CEF No. 2: Terrible Time to Buy This 8.3% Dividend

The Stone Harbor Emerging Markets Income Fund (EDF) isn’t the worst pick. With a 17.1% annualized total return over the last 10 years, it has crushed many of its competitors, and its 8.3% dividend is one of the most generous out there.

But look closer and you will see danger.

Ignoring the risks to global growth that the trade war could pose (and we’re already seeing growth targets being missed in emerging markets in Southeast Asia, Latin America and Africa), the real problem with EDF is its huge 33.7% premium to NAV.

While EDF’s strong performance has driven it to a premium since late 2017, its premium has gotten out of control lately: 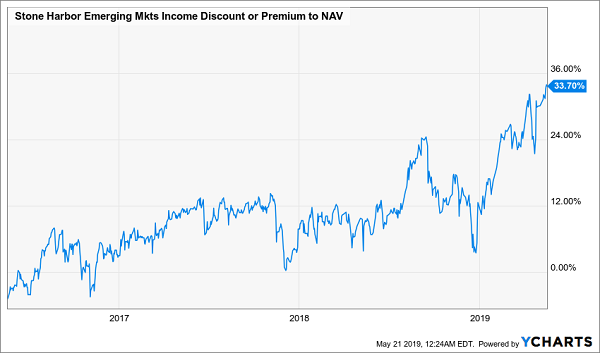 The spike is mostly due to a random flush of cash coming into the fund in 2019. But does EDF deserve the money? I don’t think so.

EDF Buyers Get Ahead of Themselves 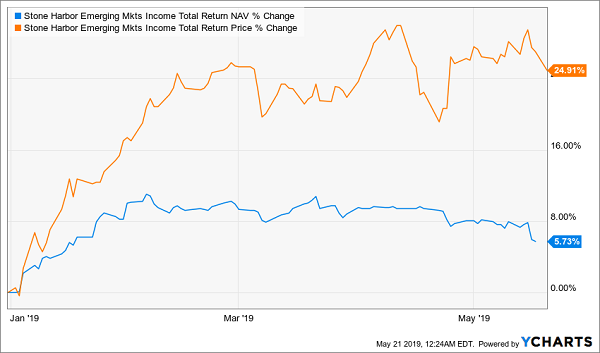 Since EDF’s NAV is up a mere 5.7% in 2019, it does not deserve a near 25% price return. The risks in this leveraged fund, which borrows in US dollars to buy assets in emerging markets, many of which depend on strong local currencies, are already high. But to compound that risk with a sudden, unprecedented spike in the fund’s price relative to its NAV is madness. EDF is a clear sell now.

Now that we’ve talked about how the discount to NAV can tell you when to sell, let’s look at the other side of the equation: how it can indicate when a CEF is ready to buy.

Consider the Liberty All-Star Equity Fund (USA), which traded at a ridiculous 8% discount to NAV when I recommended it to members of my CEF Insider service on December 28.

Since then, USA’s discount has been slashed nearly in half: 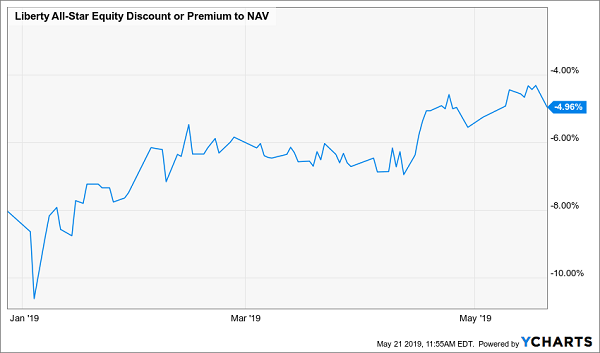 That shrinking discount made all the difference, giving the fund the afterburner it needed to rocket past the S&P 500—and by no small amount, either: 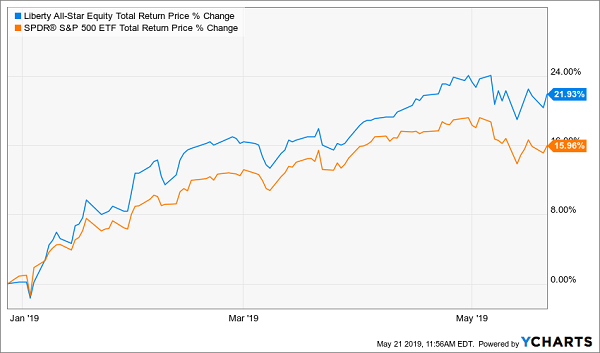 I’ve seen this story replayed again and again with CEFs, and I’ve just uncovered 4 other CEF buys throwing off life-changing payouts of 8.7% and boasting some of their widest discounts ever!

In other words, these 4 funds are at the starting line of the same profit ride USA just took. When their discounts snap shut, they’ll to sling these 4 funds to huge gains in short order.

I’m talking 20% price upside, on average, in the next 12 months. And when you tack that on to the 8.7% cash dividends this quartet pays, you’re looking at a 29% total return here!

With a big chunk of that win in cash.

I’ve gathered all the details on these 4 powerful income (and gain) generators together in a new free report, which is waiting for you now.

All you have to do is click here to get yours and uncover everything you need to know about these 4 overlooked 8.7%-paying funds: names, tickers, buy-up-to prices, an in-depth look at how they generate their massive payouts and much more.