This 5.5% Dividend Will Profit From Last Week’s Hedge Fund Blowup

This mess with Archegos Capital Management has shone a light on the use of leverage in investing. And it’s particularly relevant (in a good way!) to investors in high-yield closed-end funds (CEFs).

Archegos, if you’re not familiar, is a hedge fund that had (until last week) $30 billion in positions in several stocks, including ViacomCBS (VIAC), Discovery Inc. (DISCA) and Chinese firms like Baidu Inc. (BIDU). It employed a lot of leverage in doing so—and those debts were suddenly called in. 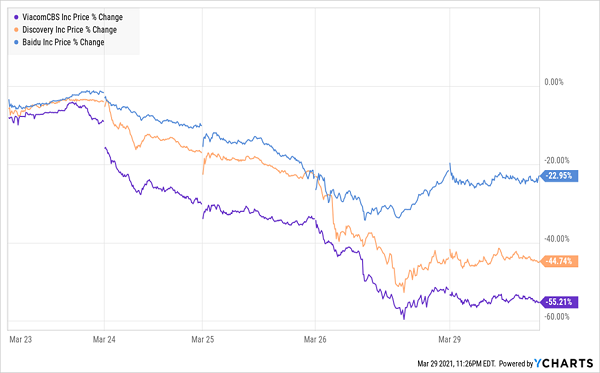 The trigger came when Viacom raised $3 billion from a secondary stock offering. This diluted the holdings of existing Viacom shareholders, causing the stock to fall 7%. Archegos then had to cover its leveraged bet by selling off its holdings.

That, in turn, caused Archegos’s holdings to fall further, forcing more selling, until the cascade effect essentially meant Archegos had to sell all of its $30 billion in holdings to cover its debts, and its value dropped to zero.

This was bad news for the banks that facilitated Archegos’s heavily leveraged positions—particularly Credit Suisse (SC) and Nomura (NMR), whose shares fell particularly sharply in the aftermath.

For some investors, this situation may call to mind the financial crisis of 2008/’09, when investment bank Lehman Brothers was overleveraged on low-quality mortgages that were incorrectly rated as high quality. When investors realized those mortgages were at a high risk of default and repriced them to reflect that, the entire bank (which had been around for over 150 years at that point) was suddenly worth zero.

But this is much different. For one, Archegos, despite its multi-billion-dollar value, is tiny compared to the $768 billion in debt Lehman Brothers owed. For another, the problem in 2008 was that an entire asset class tied to trillions of dollars of assets owned by hundreds of millions of Americans was at stake. This time, it’s limited to one hedge fund’s leveraged investments in just two stocks: Viacom and Discovery.

Investors Will Likely Take the Wrong Message From the Archegos Collapse

The lesson here is not that leverage is high risk, but that overly aggressive bets in a bull market with too much leverage are risky (which is a given for conservative income-seekers like us!). In reality, a fund that uses leverage prudently can boost returns and give shareholders a nice boost in the long run.

And studies have shown that funds that are 20% levered or less have almost zero chance of going bankrupt like Archegos. That means if you build a diversified portfolio including some of these funds, along with unlevered funds, you can get more diversification across asset classes and set yourself up for a performance boost and a strong income stream, to boot.

A great example of a CEF that uses leverage to beat the market on the regular (and provide a high income stream, too) is the Gabelli Dividend and Income Fund (GDV), a 5.5%-yielder that has a modest amount of leverage (11% of net assets). 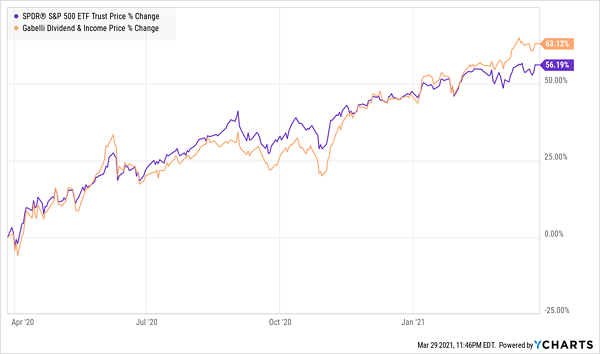 Despite its more conservative portfolio of cash-flow-focused companies like Mastercard (MA), Honeywell (HON) and Sony (SNE), GDV has beaten the S&P 500 over the last year by a healthy margin, thanks in part to management smartly adding to the fund’s leverage during the market panic a year ago, which helped GDV buy more assets when they were far oversold.

While that gets you a sustainable income stream that is over triple what an index fund gets you, there’s an added bonus: GDV trades at a 10.4% discount to net asset value (NAV, or the per-share value of its portfolio holdings) today. (Although that discount has been steadily disappearing since the start of the year, when it was 14.2%.)

That discount will likely shrink further as more investors pick up on the fact that a moderate use of leverage on a conservative portfolio of companies with strong cash flows is a good way to get investors more income and superior returns. And you can sleep well at night knowing that GDV, run by straight-shooting value investor Mario Gabelli, is nothing like Archegos.

I recently made another discovery that shows just how safe CEFs—particularly well established CEFs—are, and why they’re a must-own for your retirement portfolio.

Here’s what my latest research says: of the 330 CEFs that have been around for a decade or more, only 14 have lost money in the last 10 years.

And of the 14 CEFs that did lose money, 11 were in the energy sector. Strip out those 11 laggards and CEFs’ win rate jumps to 99%!

That, plus the fact that the average CEF yields around 7% today, is why these funds must have a place in your portfolio. And I’m going to share my 5 best buys in the CEF space with you right here. These 5 funds yield 7.2%, on average, and they trade at big discounts today—so much so that I’m calling for 20% price upside from them in the next 12 months!

Full details on all 5 of these funds are waiting for you now in an exclusive investor report. Click here to read it and discover these funds’ names, tickers, complete dividend histories, my unvarnished take on management—all of my research on every one of them.