A few weeks ago I glowingly declared that the bear was back in charge, and that the new trend was down.
Channeling Lee Corso – not so fast, my friend!
It’s been a strong retracement of the Jan-Feb decline: 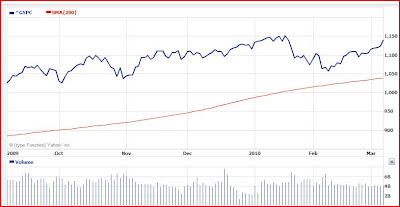 Markets have rebounded – from oversold in Feb, to overbought in March!
(Source: Yahoo finance)
BUT – until we see a poke above the 1150 mark, we can’t say for sure that the uptrend in back in place.
So we’re kind of in a state of limbo right now. The rally appears tired, and I’d say it’s on it’s last hurrah, but we’ve been seeing last hurrahs for the last 6 months. So anything is possible.
The bearish publications I follow have conceded that an upcoming decline must be swift and decisive to confirm that the downtrend is in place. So we’ll see where the week takes us from here.
While Stocks Climb, The Dollar Rests
The dollar, which we believe continues to be the linchpin of the financial markets, is taking a breather from its recent assent, as stocks climb. So the formula that has been in place since roughly 2004 remains in place, and that formula is the inverse relationship between the dollar and stocks – dollar up, stocks down – stocks up, dollar down. 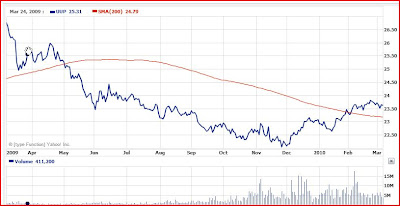 The dollar takes a breather – but it’s still in an uptrend.
(Source: Yahoo Finance)
With the dollar still in an uptrend, and well north of it’s December lows, I’m more inclined to think of this stock market rally as a correction in a downtrend, rather than vice versa.
If the dollar were to take out it’s previous lows, I’d be nervous about this hypothesis. But the reality is that not only has the dollar rallied quite a bit since December – AND it also sits well north of its 2007 lows.
The dollar may be doomed in the long run, but it’s running a helluva sprint right now.
Did We Mention This Stock Market Rally is Tired? Really Tired?
With the exception of last Friday (which throws a little bit of a curveball into the equation), this rally has largely taken place on declining volume, while the drops have occurred with on expanding volume – and hence more conviction.
Brian Hunt writes that the professionals aren’t buying this rally…

I have a chart for you showing why many of the smartest traders I know are asking themselves this question… and why they expect the market to head lower, at least in the short term.

Below is a chart that displays how some professional traders view the market. It shows the past nine months of trading in the big S&P 500 fund (SPY). Many days, this is the most frequently traded security on the market. It moves in lockstep with the benchmark S&P 500 index.

You’ll notice this chart has more to it than the simple “line charts” you often see on television or in the newspaper. This chart contains much more information, which you can use to make smarter trades.

You can read the rest of Brian’s piece – and check out his price/volume chart – here.
But Don’t Tell This to Mutual Funds – They’re “All In”!
Bloomberg reports:

Equity mutual funds are burning through cash at the fastest rate in 18 years, leaving them with the smallest reserves since 2007 in a sign that gains for the Standard & Poor’s 500 Index may slow.

Cash dropped to 3.6 percent of assets from 5.7 percent in January 2009, leaving managers with $172 billion in the quickest decrease since 1991, Investment Company Institute data show. The last time stock managers held such a small proportion was September 2007, a month before the S&P 500 began a 57 percent drop, according to data compiled by Bloomberg.
Oh my.
(Hat tip to frequent guest author David Galland for finding this piece!)
Stephen Colbert Explores Credit for Kids: Kid-Owe!
One of our favorite financial analysts, Stephen Colbert, is back on the beat with his excellent coverage.
You may recall Colbert’s astute recommendation to load your portfolio with gold, women, and sheep. (And I hope you heeded his advice!)
The new word on Stephen’s mind is Kid-Owe – enjoy!
Save a Buck – By Not Saving???
Nevada Federal Credit Union is turning the business model of banking upside down – by paying customers to close their accounts! Mike “Mish” Shedlock reports on his excellent blog:

Nevada Federal Credit Union has too much money and does not know what to do with it. Worse yet, sitting in cash is costing the credit union money.

Insurance premiums are the culprit. On top of any deposit premium paid to customers, insurance runs .4%. Yet short term treasuries yield .25%.

Nevada Federal sees no good lending opportunities so it is paying customers to close accounts.

Sounds like a healthy economic system to me! Hat tip to friends/readers JL and Carson for the link tip on this beauty.

Another Good Way to Make Money – Sell Your Home at a Loss!
In case you weren’t already in awe of the brilliance of our economic system, here’s another great way for entrepreneurial-minded homeowners to make money – The New York Times reports:

In an effort to end the foreclosure crisis, the Obama administration has been trying to keep defaulting owners in their homes. Now it will take a new approach: paying some of them to leave.

This latest program, which will allow owners to sell for less than they owe and will give them a little cash to speed them on their way, is one of the administration’s most aggressive attempts to grapple with a problem that has defied solutions.

Hat tip again to friend and noted guest author Jonathan Lederer, who was ironically reading this piece when I forwarded him the following email…
Foreclosure Home Tour This Saturday!
To reserve YOUR spot, please click here – hilariously, this is not a joke – this email actually showed up in my inbox today:
Elk Grove, CA – Real Estate Broker David Jurewicz of HomeRocketRealEstate.com will be giving a tour of five high value foreclosure properties in the Elk Grove, CA area. The tour begins at a meeting place near Highway 99 and Laguna Blvd. Saturday March 13, 2010 beginning at 10:00 a.m. and lasting until 12:00 noon.

There are only 10 spots available for the tour which will keep it small and manageable. To reserve a spot on the tour, call David at (916) 682-6454. Those who call will be provided with information about where the meeting will take place as well as answer any questions. Attendees will receive a free 100-page e-book “Foreclosure Secrets,” with a value of $19.95. David has also arranged well-priced financing with a local lender who can quickly pre-qualify potential foreclosure home buyers. “Most bank sellers won’t even look at your offer unless you’ve been pre-qualified,” says Jurewicz.

“This is a no-obligation opportunity for anyone seriously interested in buying a home to see what’s available for their real estate dollar,” says Jurewicz. “I’ll choose the homes for the tour just before the tour begins to make sure the properties I show are a great value and are still for sale,” he said.

I’ll let you insert the punchline.
My Trading Activity – Still Short the S&P (Twice)
Ouch – it all looks obvious in the rear view mirror, so it’s no use kicking myself. These shorts both looked great and perfectly timed for a little while.
I didn’t want to cover them in a bear market, instead electing to “hold” all the way to the bottom. Well I may have declared the bear in control too soon…though we can’t say for sure just yet.
I’m still hanging on because this rally appears quite tired, and I believe the risk from here is to the downside. We’ll see!

Still double short the S&P…though these positions used to look much sexier!

The S&P has – almost – retraced it’s swift decline. A poke above the 1150 mark would indicate it’s still a bull market…for now at least.
(Source: Yahoo finance)
Have a great rest of the week in the markets! Comments are always welcome and very much appreciated.
Portions of this article (or the whole thing if you can’t get enough) may be republished on your website, blog, or email newsletter – all we ask for is proper attribution, and a backlink to our site with the original article!