OK I’ll admit, it’s a stretch for me to sit here in my comfy office chair in Northern California and opine about the future of the Chinese economy…especially since I’ve been there exactly zero times.

But the internet is a wonderful place, and it’s a fun sport anyway, so with that disclosure out of the way, here’s a China piece worth reading from yesterday’s Daily Reckoning – China: No Shortcut to Greatness, by investment author and portfolio manager Vitaliy Katsenelson.

It seems that China has got economics figured out. But don’t hurry to trade your democracy for an authoritarian system. The Chinese grass is not as green as it appears.

First, one shouldn’t believe all the economic numbers that are put out by the Chinese government. This is the government that magically managed to report 6% to 8% GDP growth in the midst of the financial crisis, when its exports were down more than 25%, tonnage of goods shipped through its railroads was down by double digits, and its electricity consumption was falling like a rock.

Second, China will do anything to grow its economy, as the alternatives will lead to political unrest. A lot of peasants moved to the cities in search of higher-paying jobs during the go-go times. Because China lacks the social safety net of the developed world, unemployed people aren’t just inconvenienced by the loss of their jobs, they starve (this explains the high savings rate in China) and hungry people don’t complain, they riot. Once you look at what’s taking place in the Chinese economy through that lens, the decisions of its leaders start making sense, or at least become understandable.??

You can catch the rest of the article here.
Want a foolproof way to know how the Chinese economy is doing, from the comfort of your own living room? That’s easy – just pull up a chart of the Shanghai Composite Index! 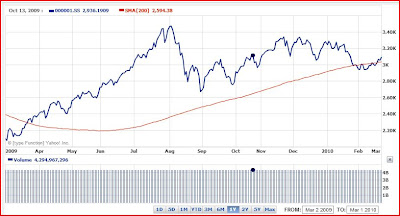 The Shanghai Composite Index recently slumped below it’s 200-day SMA.
Source: Yahoo finance
We previously discussed potential weakness in Chinese stocks, and it looks like this could be bearing fruit. A decisive break below the 200-day moving average would indicate that our boy Vitaliy is on the money!