The Common Thread in Nature, Investing – and Life!

Despite what some investing talking heads may say, the financial world is not exempt from natural law.
There’s a natural flow to the way the world works – and it absolutely carries over into investing. One common thread is change – things are either improving, or deteriorating, but they are almost never stagnant. Nature, after all, hates a vacuum!
Guest author David Galland expands upon this topic as only David can do. Read on, to learn why the world, as we know it, is (always) wasting away in some way, shape, form…
***

Entropy – Why the World as We Know It Is Dying

The concept of entropy is one of the most useful terms for understanding just about everything. While it has its origins in natural law – thermodynamics, specifically – the concept holds true pretty much across all closed systems.
In the simplest of terms, every closed system will ultimately degrade toward a state of maximum entropy.
I’ll use the current political system of the U.S. as a convenient example. When American democracy was first shoved out of the nest by the founding fathers, it was new, fresh, and energetic. It took the world’s breath away at its boldness and unlimited promise, and set the wheels turning on tangible change across much of the world.
Before the ink dried on the Constitution, however, the degradation began. From the beginning, the country’s political operations fell into the hands of a strictly limited number of parties, which quickly coalesced into just two. Since then, they have essentially shared power, with only minor differences in policies between the two. Simply, absent a disruptive external force, the closed political system quickly matured into an institutionalized “sameness” that all but assures no serious challenges – leading, ultimately, to the certainty it will degrade to only a shell of its former self.
It was, perhaps, because of his own understanding of natural law that Thomas Jefferson was heard to remark, “The tree of liberty must be refreshed from time to time with the blood of patriots and tyrants. It is its natural manure.”
That doesn’t mean I am advocating revolution – just pointing out the fact that any closed system, no matter how well constructed, will degrade. To expect the United States of America to avoid this fate is to expect the impossible.
Switching to a corporate example, I used to be a regular buyer of Toyota cars. They were well made, innovative, and suited my changing needs over the years. And I wasn’t alone – in 2007 they became the world’s largest automobile maker, with a global manufacturing and distribution system that made them appear dominant. Behind the scenes, though, entropy was at work.
In 2008, when the time had come to lease a new car, I reflexively headed over to the local dealer fully expecting to drive off with yet another Toyota, just as I had done several times over the previous decade or more. But as I walked around the showroom, it was impossible not to notice that the company had lost its edge. The cars on offer were not only more expensive than the competition, but even the newest models had that “so yesterday” look about them.
Surprising even myself, I walked out and ended up leasing from another company. I remember vividly at the time saying to my wife that we should short Toyota’s stock. Of course we didn’t – but if we had, it would have been a good play, as you can see in the chart of the company’s stock price here. Note that Toyota’s share price peaked in 2007, almost concurrently with it becoming the world’s largest car company. 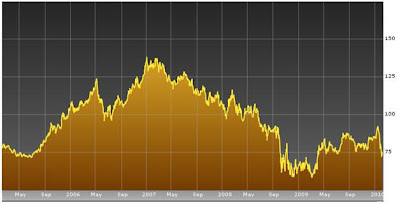 As I said at the onset, you can see entropy at work in virtually every closed system. Consider the U.S. dollar, which became the world’s de facto reserve currency as a result of Bretton Woods.

What an amazing advantage for the United States – this unique ability to provide the world’s central banks with their primary reserve component! And to have all the world’s commodities dealt in dollars. In short, the dollar became the centerpiece of the global economic system.
It was, of course, damned to entropy, with Nixon’s ending the dollar’s gold backing just being part of the natural progression. And if he hadn’t done it, one of his successors would have – due to some “emergency” or as a “temporary” measure, or some other flimsy political cover.
Regardless, the degradation of the currency gained speed and, systematically, it’s been all downhill since.
You may also want to think about entropy when pondering the Chinese miracle. No question, China is having a heck of a run. As James Quinn writes in his article “Is China’s Recovery a Fraud?” in the February edition of The Casey Report, in 1970 that country’s GDP was just $92 billion. Today it is $4.9 trillion!
“Unstoppable!” cheers the punditry. The Chinese leadership, whose capable hands are very much on the levers of the macro-economy, are cut from special cloth, they add.
In answer to that, Quinn points out that despite China being an export-based economy, purpose-built to supply goods to a U.S. population engaged in a mad rush to spend themselves into debt and default – which is to say, an economy now only a memory – there is currently 30 billion square feet of commercial real estate under construction in China.
I’m not sure if bowling is popular with the Chinese, but with all that spare space, some enterprising individual might want to consider promoting it as the coming thing. Roller rinks? Indoor laser tag centers?
Meanwhile, back in the U.S., we the people are no longer content with a free-market system that embraces periodically burning down the house in order to rebuild stronger and better – a system which has been proven to create wealth, and lots of it. Instead, we are hell bent on adopting the closed economic system of a socialist model where everything and everyone is tightly controlled.
On that point, a recent article in the Wall Street Journal titled “No Exit in Sight for U.S. as Fannie, Freddie Flail” sheds light on the continuing degradation in the free market that used to underpin the nation’s hugely important housing sector…
Fannie and Freddie, for their part, remain at the core of a housing-finance system that inflated a dangerous housing bubble. After prices collapsed, sending shock waves around the world, the federal government put America’s housing-finance system on life support. It has yet to decide how that troubled system should be rebuilt.
On Dec. 24, Treasury said there would be no limit to the taxpayer money it was willing to deploy over the next three years to keep the two companies afloat, doing away with the previous limit of $200 billion per company. So far, the government has handed the two companies a total of about $111 billion.
(Full story here.)
Can’t you just smell the entropy? The results are not just predictable, they are evident – just look around.
As investors, it is, I would contend, important to understand the notion of entropy – and to watch for it in your portfolio companies, in your bureaucracies, and, on a more personal level, your relationships and your health. On that last point, the human body is very much a closed system and so, as we all are too painfully aware, will degrade until it ceases to exist.
You can slow the degradation by taking care of yourself. But it’s also worth remembering that it’s a one-way slope, so enjoy yourself while you are fit and able to.
While it’s impossible to halt entropy, what you can do is take action to protect yourself and your assets from its effects. That’s what the editors of The Casey Report do best: recognize and examine emerging trends in the economy and markets, and help investors take advantage of the opportunities that arise from them. And profits are everywhere if you know what to look for – even in the worst economic crises. Click here for more…
Ed. note – I am a Casey Research subscriber, and affiliate, and I highly recommend their stuff.