4 Deep-Value Dividend Stocks Yielding Up To 11.8%

Whenever a dividend payer goes on sale, it’s a chance for you and I to make a lot of money and collect steady income. Today, we’ll highlight four stocks that are worthy of our review.

Not only do we bank a higher yield, but we can also enjoy price appreciation as shares rise in value. This is the benefit of combining value and dividend investing.

For example, let’s say we like a stock at $40 that is paying a $1.50 yearly dividend. If we like it at $40, then we should love it at $30 – because our potential upside (and hence total return including dividends) is that much greater:

The same exact stock. The same exact company. But a deep-value opportunist would’ve managed to squeeze more than triple the return out of the stock within the same calendar year in this theoretical scenario – and that doesn’t even factor in the years of higher yield they’ll collect going forward.

Right now, I’m finding deep values created from significant dips in the market. And as I mentioned we’ll discuss four stocks that are dishing wildly higher yields than they have in the past – now approaching anywhere between 6.6% and 11.8%! These aren’t specialty assets like real estate investment trusts (REITs) or business development companies (BDCs), either – they’re classic, easy-to-understand stocks, most of which you’ve heard of.

These stocks stick out as supreme values in what is still a largely overbought market. For all the weeping and gnashing of teeth this year, the S&P 500 is down a mere 1% this year, and that has done little to cut the froth on what is a historically expensive stock market.

Right now, the market is trading at more than 24 times trailing earnings. It’s not all that cheap looking forward, either, with the S&P 500 trading at 17 times analysts’ estimates for future profits.

A few stocks have contributed to the market’s losses more than others, however, and these four stocks in particular have been clobbered to a point where their yields are fat and their P/Es are slim. Indeed, each of these stocks yields between roughly 7% and 12%, but they all trade at less than 10 times next year’s estimates!

Are these four wild bargains, or “cheap for a reason”? Let’s dive into our analysis.

“Are newspapers dead?” That’s the question most people would say you need to answer to determine whether USA Today parent Gannett (GCI) is worth a buy, but the answer is not so simple.

Gannett actually recorded growth in digital advertising revenues, marketing revenues and subscription revenues in Q4. And during September, USA TODAY Network’s properties registered 125.3 million unique visitors – an all-time high. When you take into account that, as well as continued subscription success for the likes of the Washington Post and The New York Times Co (NYT), it’s clear that newspapers indeed are enjoying a renaissance.

But here are the numbers that make very clear that an investment in newspapers is about far more than their subscription numbers.

Same-store print ad revenues plunged 18.5% year-over-year, which was right in line with a similar drop in Q3 2017. Same-store circulation revenues dropped 6.7%, which was only a little better than Q3’s 7.6% decline. And while the company did report an adjusted profit, it actually took a GAAP net loss of $13.6 million, versus $24.6 million in earnings for the same period last year. Yes, Gannett’s 16-cent quarterly dividend is safe when you consider the company earned $1.03 in adjusted earnings, but also understand that with financial shenanigans backed out, GCI posted a mere 6-cent profit.

In January, I said that Gannett (GCI) was dead meat on the next pullback, and GCI shares spent the next three months playing out that bearish scenario. While the broader market still is off by about 7% from that point in time, Gannett’s stock is far worse off, down 19%.

Despite the fact that Gannett trades for less than 10 times future earnings estimates and yields nearly 7%, I think GCI is in the same boat today. Yes, a rising tide for the market would lift this boat, but if the markets remain rocky or start to decline again, there will be a sprint toward safety – and an exodus out of questionable plays such as Gannett. 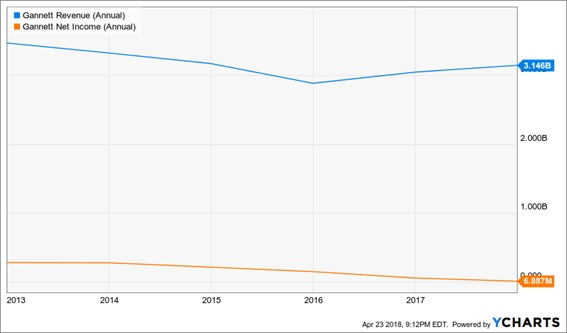 GameStop (GME) is an infuriating stock that so often seems ready for some sort of bounce – even if not a meaningful one, a significant dead-cat bounce that maybe swing traders can juice. But the company has been in a broader downtrend since 2013, and its declines have been almost eerily consistent and smooth since the start of 2017.

GME has lost nearly half of its value since that point.

GameStop was seemingly en route to a great fourth quarter thanks to the Xbox One X and Nintendo Switch. If nothing else, that should have given the company enough of an operational pop to help stem the tide of its seemingly endless declines.

That’s not what we got in late March. The company did manage to score beats on both the top and bottom lines, with $2.02 in adjusted per-share profits and $3.5 billion in revenue. But that adjusted profit was less than last year, and on a GAAP basis, the company posted a $1.04 loss. Cash flow continues to decline, too.

But GameStop’s biggest concern is the crack it developed on the dividend front. For all of its issues, the company had at least been growing its payout, but while it was due to raise its dividend in March, GME kept it flat at 38 cents per share. And that’s all you need to know about management’s opinion right now. Things are in bad enough shape that the dividend has to stay put until the company gets its affairs in order.

Investors would be wise to stay away until that point.

“Mailing and shipping solutions, with confidence built right in.”

Is there any wonder that a postage meter specialist that offers antiquated products such as mail openers, sorters and inserters has lost 60% of its value in the past three-plus years?

That said, Pitney Bowes is at least showing signs of life, thanks to its positioning in businesses that still matter in the 21st century (such as shipping solutions), as well as newer offerings that are very relevant, such as marketing services, location intelligence and customer analysis. To wit, the company actually saw the top line expand in four out of six segments last year, and revenues grew from 2016.

Still, there are some very real concerns that Pitney Bowes isn’t just shrugging off any time soon. For one, there’s the longer-term trend of flat profits and declining revenues:

Pitney Bowes (PBI) Might Be Cheap, But These Results Don’t Scream Value 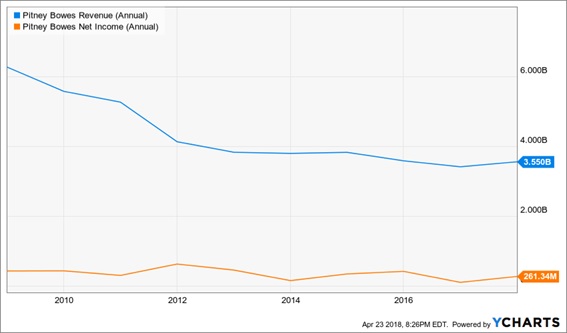 There’s also the fact that despite top-line growth, adjusted profits still dropped 16% as EBIT margins shrank from 18.5% to 14.5%. Moreover, the company’s net debt jumped from about $2.7 billion to $3.6 billion, against just about $1 billion in cash on hand.

The real tell concerning Wall Street’s confidence in a newer, more modern Pitney Bowes, however, has come since a March 6 announcement. The company had been exploring “strategic alternatives,” including putting itself on the auction block, but concluded that it could generate more value by staying the course and not selling out.

Shares have dipped nearly 20% since then. Investors aren’t buying it.

At first glance, it’s easy to lump in Compass Diversified Holdings (CODI) with business development companies. After all, it features a portfolio of businesses such as Foam Fabricators (foam solutions), 5.11 Tactical (tactical apparel and gear) and Ergobaby (baby-wearing products). It lists certain parameters for its holdings, such as an enterprise value range of $75 million to $500 million, or stable operating cash flows of at least $10 million a year.

But Compass is not a BDC – and in fact even has an area in its frequently asked question section dedicated to dispelling this notion.

Business development companies provide financing to small and midsize businesses, typically via debt or equity. CODI, however, simply buys controlling interests in companies, then partners with management to identify and address critical needs.

This company is a cash-flow machine – one that was particularly well-oiled last year. For all of 2017, the company’s cash flow came to $92.2 million, which was a 21% improvement on 2016’s full-year total. That means good things for its dividend, which admittedly is anchored at 36 cents per share, but which offers up an ample yield of nearly 9% at the moment.

Compass hasn’t been hemorrhaging like these other picks, and instead has just been listing lower, by about just 4% over the past year or so. Instead, CODI is just plain ol’ undervalued – something that hasn’t gone unnoticed by insiders, who recently snapped up shares.

This four-pack is a little risky for my liking, even at their current prices. If you’re looking for steady dividend income today, then I’d instead recommend my handpicked portfolio of payout winners that not only will pay you 4x more, but will pay you 3x more often.

[X] Monthly income to use against your monthly bills.

[X] Dividends large enough to allow you to live off investment income entirely. That means no selling your stocks and shrinking your nest egg, which ultimately shrinks your regular dividend paycheck.

[X] Better returns on any dividends you choose to reinvest. If you don’t need the income from your portfolio right away, you don’t have to wait every three months to put dividends to work – you can sink them back into new investments just about every 30 days!

Because these big dividends compound quicker, they’ll turbocharge your net worth and allow you to enjoy the retirement you’ve worked so dearly to reach. Don’t delay! Click here and I’ll send you my exclusive report, Monthly Dividend Superstars: 8% Yields with 10% Upside, absolutely FREE.