Remember when stocks took some of the biggest nosedives in market history back in early February?

I know that sounds like a ridiculous question, but I ask because many folks seem to have forgotten, with stocks quite a bit calmer now than they were in those days, even though they’ve seen a little more turbulence recently.

But it’s not too late for us contrarians to go on a bargain hunt—and we’re going to do it with my tool of choice: a high-dividend (I’m talking 7%+ cash yields here), yet easy-to-buy fund called a closed-end fund (CEF).

First off, don’t be surprised if you’re not familiar with CEFs. The CEF market is tiny, with only about $260 billion in assets under management, versus $4.3 trillion in ETFs.

That’s because CEFs aren’t promoted as aggressively as ETFs, which have been dominating the financial press for years, thanks in no small part to aggressive PR from big ETF issuers like Vanguard, iShares and Invesco.

But the fact that Wall Street keeps these income generators in the shade is good news for us, because it means buying now puts you in position for bigger gains as CEFs go mainstream. And with the massive cash payouts and upside in this little-known corner of the market, this really is just a matter of time.

And when I say “massive,” I mean it: consider the top-performing CEF, the BlackRock Science and Technology Fund (BST). It’s up 21.9% on average per year since inception, making it laughably superior to its benchmark ETF, the Powershares QQQ ETF (QQQ):

The Winner Is Clear 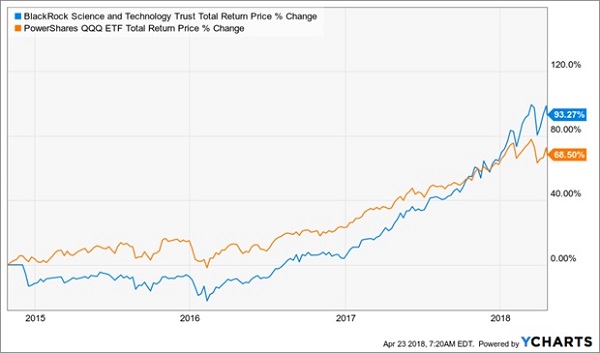 Plus, BST pays a nice 4.9% dividend today, more than double the market average.

There are literally dozens of CEFs that have beaten the index like BST, and the CEF market is so crazily inefficient that a lot of these funds trade on the market at a discount to the value of their underlying portfolios.

That markdown—known as the discount to net asset value (NAV)—is our secret weapon: a quirk of CEFs that mutual funds and ETFs don’t have to nearly the same degree. By watching this discount, then buying when the markdown gets unusually wide, you can rack up some terrific gains indeed.

The Power of the Discount

Take, for instance, another tech CEF, the Nuveen NASDAQ 100 Dynamic Overwrite Fund (QQQX), which has pretty closely matched the index’s performance (it’s up 278.4% over the last decade versus 285.3% for QQQ). While QQQ almost always trades at around its NAV, QQQX has traded from as much as a 20% discount to NAV to a 10% premium to NAV over the last decade: 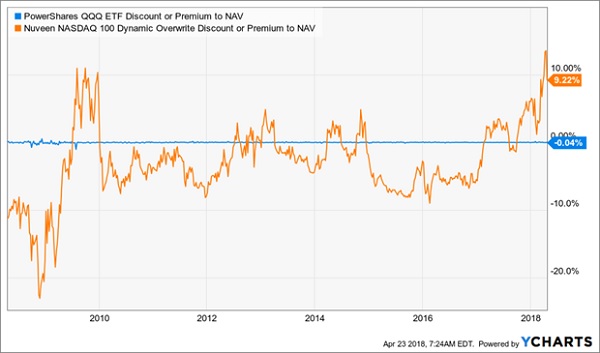 There is a clear advantage to this. If you bought QQQX when its discount was at its widest, in late 2008, you would’ve beaten the index by a pretty big margin for over a decade:

Buying the Discount Pays Off … 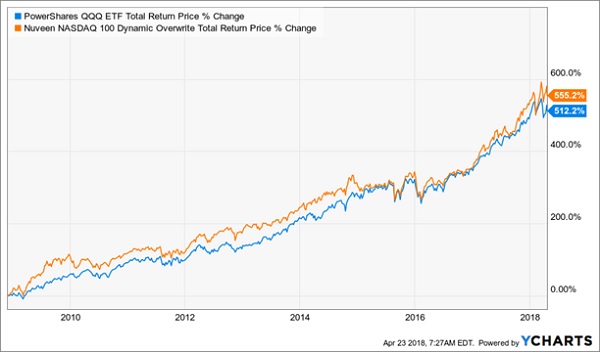 However, if you bought QQQX when it traded at the highest premium to NAV in its highest history, just 8 months later, in mid-2009, your performance would suddenly drop to about two-thirds that of the index:

… While Overpaying Slashes Your Gain 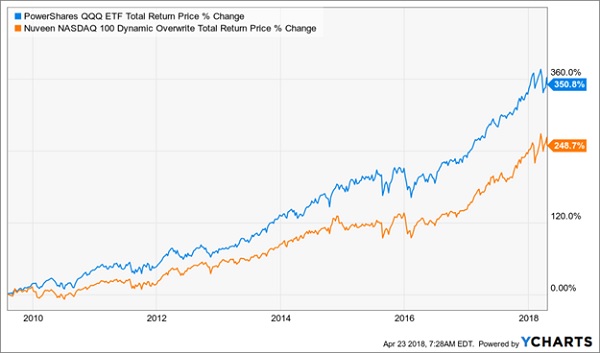 This is the key to successful CEF investing. And since the indicator of when to buy and when to sell is pretty clear—focus on the discount to NAV and strike when it’s particularly wide—timing the CEF market is actually pretty easy.

Why CEFs Are Safer Than ETFs

Now that we’ve talked gains, let’s come back to the dividend, which gives you a key safety feature that goes well beyond an income stream.

The average dividend yield of the major CEFs listed in the United States is 6.8%, far in excess of the 1.8% you get from the SPDR S&P 500 ETF (SPY) and similar offerings from Vanguard and iShares. This gives you an even more powerful tool with which to compound gains.

Think of it this way: imagine you were fully invested in SPY in late 2017, when stocks were up over 20% in a year and just about everyone was looking for a correction. When that correction hit in early 2018, your capital gains from the prior year’s bull run were suddenly gone—because they’d all been locked up in the ETF.

See Where the Gains Vanish? 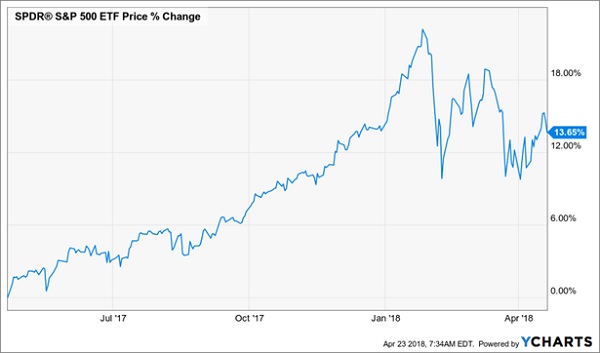 But with a CEF like the Nuveen S&P Dynamic Overwrite Fund (SPXX), which pays out 6.3% in cash in the form of quarterly dividends (and keep in mind that many CEFs pay monthly!), you could decide to take more of your total return off the table and put it somewhere else—like in corporate or municipal bonds, real estate or whatever else strikes your fancy.

Maybe that’s why ETF issuers don’t like CEFs—they give investors the power to be more selective and take more control of how their money moves instead of leaving it up to the market’s whims.

But of course, that’s not the only benefit of CEFs’ income streams. BST’s 4.9% dividend and QQQX’s 6.5% payout are around 7 times greater than QQQ’s pathetic 0.8%, so you can buy into these funds, profit from tech’s massive bull run and pocket $475 in monthly income on a $100,000 investment. With QQQ, you’d get a paltry $66.67 a month—not enough to even cover a cable bill!

The power of CEFs is clear—what’s unclear is how long the market will keep ignoring these powerful income vehicles.

Just a week ago, I released my 5 hottest CEF picks—and I want to show them to you now.

Each of these 5 unsung funds throws off safe, and massive, dividend payouts—I’m talking an average 8.2% in CASH, with one of these beauties even handing you an outsized 10.0%.

What’s more, each and every one of these 5 funds trades at a massive—and totally unusual—discount to NAV.

The bottom line is this: those weird markdowns simply can’t last, and we’re looking at easy 28%+ upside in the next year as they revert to “normal.”

I can’t wait to show these 5 off-the-radar income plays to you. All you have to do is CLICK HERE to get instant access to the name, ticker symbol, buy-under price and my complete research on every single one of these 5 cash machines!