Bernanke – man of
the year. Did he earn it? Or
pushing on a string?
Markets Strong Out of the Gates…But How Much Conviction is Left?
The broader indices continued to climb higher in the first week of trading in 2010. But how much buying power is behind these moves? 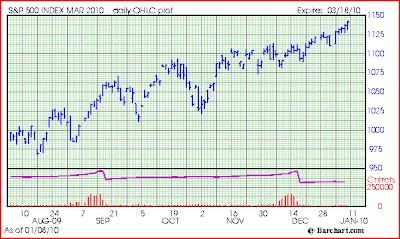 Moves straight up usually don’t end well.
(Source: Barchart.com)
Since the correct in early November, stocks have climbed just about everyday, without much of a blip of a correction. Meanwhile, upward momentum and volume continue to look anemic, indicating that the rally may finally be running out of gas.
But thus far, warnings of a potential turndown have either been early, or wrong. So which is it?
While I am not a huge chartist in terms of reading into patterns (head and shoulders, etc), I do notice that the chart of the S&P above is tracing out an ascending, contracting triangle. These are usually proceeded by sharp moves either up or down. Obviously a move down would appear to be the more likely scenario, so it will be interesting to see what the S&P does over the next couple of weeks.
It very well could continue to move higher, so I am going to hold off on shorting until we see a definite break in the uptrend. The mistake I make in early November was shorting too early, under the (incorrect) assumption that the uptrend HAD been broken.
So we’ll chalk that up to a learning experience, and try to be a little more patient on pulling the trigger.
Tax Receipts Continue to Decline
It’s hard to get excited about this “economic turnaround” when tax receipts continue to fall across the board. Tax receipts may be the least manipulated of all economic stats, so are worth paying attention to.
Here’s a smattering of tax receipt data from around the nation…and little to none of it is positive. For a fun exercise, type “tax receipts” into Google News, and see what comes up!
It seems that a lot of the “news” about the economy bottoming is nothing more than pundits projecting the bounces in the DOW and the S&P onto Main Street. In reality, that hasn’t happen.
The markets have bounced since last March because that’s what markets do. They never travel up or down in straight lines. All we’ve done thus far is mirrored 1930’s stock market retracement – nothing more, nothing less.
From a technical standpoint – wake us up when we’ve surpassed the usual Fibonacci retracement levels.
From a fundamental standpoint – wake us up when tax receipts start to turn around…because we know there’s only one reason for people to pay more taxes, and that’s because they are making more money!
Now as to the ethics of taxation in the first place…we’ll leave that libertarian rant for another day.
Evans-Pritchard Sees Japanese Hyperinflation
If you think this column is a ball of sunshine, you’ll love Ambrose Evans-Pritchard’s take on the 2010 financial markets:

The contraction of M3 money in the US and Europe over the last six months will slowly puncture economic recovery as 2010 unfolds, with the time-honoured lag of a year or so. Ben Bernanke will be caught off guard, just as he was in mid-2008 when the Fed drove straight through a red warning light with talk of imminent rate rises – the final error that triggered the implosion of Lehman, AIG, and the Western banking system.

As the great bear rally of 2009 runs into the greater Chinese Wall of excess global capacity, it will become clear that we are in the grip of a 21st Century Depression – more akin to Japan’s Lost Decade than the 1840s or 1930s, but nothing like the normal cycles of the post-War era. The surplus regions (China, Japan, Germania, Gulf ) have not increased demand enough to compensate for belt-tightening in the deficit bloc (Anglo-sphere, Club Med, East Europe), and fiscal adrenalin is already fading in Europe. The vast East-West imbalances that caused the credit crisis are no better a year later, and perhaps worse. Household debt as a share of GDP sits near record levels in two-fifths of the world economy. Our long purge has barely begun. That is the elephant in the global tent.
As if this wasn’t enough, he also sees quantitative easing in Japan as finally getting “over the hump” in terms of deflation, and achieving what so far has been an elusive goal – hyperinflation!
Finally, Evans-Pritchard also pokes some good fun at Europe’s economic prospects.
The Worst Trend of Them All
Take a look at this chart of public vs. private sector employment, and tell me this chart isn’t the most damning of them all!
This is the type of “breakout”, or rather “breakdown”, that you short 100 times out of 100.
(Hat tip to friend and fellow Austrian economic believer Carson for sharing this link).
Diversifying Your Life
Earlier this week, our local Casey Research “phyle” met up to discuss our usual cheery topics, including what to do if the US completely melts down.
Doug Casey recommends having your whole self diversified – ie. citizenship in one country, your business in another, real estate in a third, and even some savings in a forth. So, if it really hits the fan in your homeland, you’re not completely screwed!
So our group chatted about the logistics of moving savings, including bullion itself, abroad. If you are interested in pursuing these types of options, here’s a good interview conducted by the “Sovereign Man” Simon Black about storing gold in Panama.

Gold storage in Panama is a hot item. Banks have long waiting lists for safety deposit boxes, and as I’ve discussed before, many Panamanian banks are even starting to eliminate this service, reducing the available supply of boxes on the market.

Personally if I had meaningful investment capital, I’d probably be inclined to get some bullion stashed in another country…just in case. But as is, I’ve got most of my hopes, dreams, and prospects tied up in our small time tracking software company.
What it Means to “Turn Japanese” Economically
Stratfor, a “personal CIA” service of sorts, released some engaging forecasts for regions around the world in 2010. Here’s Stratfor CEO George Friedman discussing Japan’s economic outlook:
I find his take on Japan very interesting. If the US is indeed “turning Japanese” economically, you would expect to see an increased emphasis on full employment, rather than return on capital, for the economy.
While I’m sure our politicians have the same DNA as their Japanese counterparts, I’m not yet convinced that American citizens do. Are the characteristics Friedman identifies cultural? Or, will we see Americans follow in the footsteps of their Eastern counterparts?
The next couple of elections in this country should be VERY interesting, as we’ll see how asleep the citizens of this nation really are. I’m not yet sure if the tea parties and “libertarian roots” are the tip of a larger iceberg, or one-off types of events.
Trading Positions – Looking for Dollar Re-Entry
My January S&P puts are going to expire worthless – as mentioned earlier, I jumped into that trade too early.
I am looking for a re-entry point into a long US dollar position, and I’ll probably look at picking up some UUP for my equity accounts as well. I think we’ll see a further pullback in the dollar here, before it resumes it’s march above it’s previous highs from 2008-09.
We’ve got small, but top notch, company in the short-term long dollar trade. First we saw our hero, Jim Rogers, take a short term position in the buck. And earlier this week, Tom Dyson wrote that a major uptrend is just getting started in this hated asset. 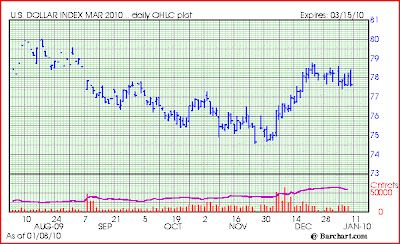 The buck, everyone’s least favorite asset, quietly bottomed in November.
(Source: Barchart.com)
Another way of playing the dollar rally would be to short currencies primed for a fall, such as the Euro or the Australian dollar. Both have started to turn down sharply.
Have a great week in the markets! Comments are always welcome and very much appreciated.