The Top Three Investment Themes to Watch in 2010

Happy New Year…and New Decade! Let’s dive into some of the top investment themes to keep an eye on in 2010…but first, a haiku:
09 Reflation
Can it continue for long?
Dollar may foil!
1. The US Dollar: The Linchpin
The dollar, which topped out in early March roughly around the time the stock market bottomed, has been looking frisky of late. It’s not above it’s 200-day moving average yet, so there is some potential resistance in the short-term, but it’s looking stronger by the day.
Can the re-flation trade continue to motor along if the dollar mounts a sustained rally? If the first wave of the global meltdown was any indication, then probably not. We haven’t yet seen any evidence to invalidate the “all the same markets” hypothesis.
Is the dollar’s recent upturn tipping off an impending markets downturn? In my opinion, this is THE theme to keep an eye on in the first quarter of 2010.

Flash Player 9 or higher is required to view the chart
Click here to download Flash Player now
View the full NYSE:UUP chart at Wikinvest
I do get a kick out of the financial media’s explanations for the dollar’s recent strength – leave it to them to justify the charts with “news”!
2. China: The Global Economic Savior
China has been billed as the posterchild of the global economic bounceback. Which seems appropriate, as it was also the star of the 2003-2007 credit fueled equity liftoff globally.
“China is fine,” pundits say. Well, perhaps. But rather than rely on various analysis and opinions on China, I’ll stick with the lazy man’s approach – watching the stock market itself.
In late November, we pointed to a potential downturn in Chinese equities as some dark clouds on the financial horizon.
How’s China done since then? While still perched above it’s 200-day SMA, the Shanghai Composite appears to be embarking upon a third attempt to take out its early August highs. 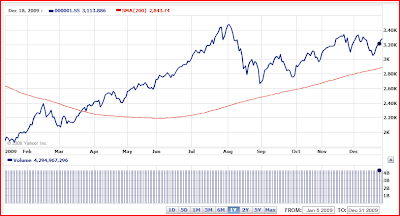 China’s rally stalls.
(Source: Yahoo Finance)
A third failure would increase the likelihood of a Chinese breakdown, and a breach of the 200-day SMA (red line above) definitely would. And if that happens, look out! I’m not sure the re-flation trade could withstand this.
3. The Banks: Still Not Lending, and Breaking Down Too
I was tempted to stop the list at #2, because we know that all the markets are still correlated…but then I pulled up this foreboding chart of the bank stocks: 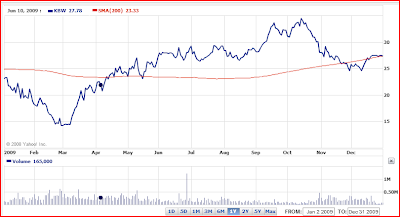 Bank stocks breaking down.
(Source: Yahoo Finance)
The bank stocks are trading right around their 200-day moving average, since making their rally highs in October. So while the blue chip indices have continued to rally and make new highs, many secondary indices have failed to confirm, especially “crap” like the banks.
Summing It Up: Deflation Likely to Return (Again)
To sum it up, it looks like the re-flation trade may be running out of gas…in which case, it would be time for the dollar to rally, and for deflation to once again take the upper hand.
A couple of months ago, I reviewed my favorite inflation and deflation arguments. Since then, I don’t think anything has changed. We remain at a key inflection point in the inflation/deflation battle, at least as far as 2010 is concerned.
I personally think the odds favor the scales tipping once again in the favor of deflation. Then it will get really interesting, as we’ll see our heroes at the Fed again swing into action. I’m skeptical they’ll be able to do much of anything useful, as I don’t think they “saved” us from anything the first time around either. The markets were oversold, and set for a huge rally – and rally they did. Where they go from here will be the true litmus test.