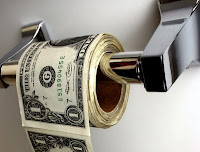 Prompted by a viewer question that asked whether it’s more likely the US will default on its debt, or go into hyperinflation, Faber says he “100% sure” that the US will go into hyperinflation.  He sees inflation picking up eventually, and the Fed keeping short term interest rates below the rate of inflation to stimulate consumption.
Which will then necessitate more money printing, and – boom!  Runaway inflation train…leaving the station, never coming back.
They don’t call him Dr. Doom for nothing – but ignore Faber at your own peril, he’s one of the few guys to call most of the recent financial disaster properly.  The guy is a fabulous thinker and visionary, he knows history down cold, and always sees developments a few steps ahead.
Also of interest in the interview, he believes this could be more than “just a bear market rally” – as he cites money printing and deficit spending as a fundamental event that is capable of driving these types of rallies.  A “crack up” boom he calls it, that “explodes at some point.”
He believes Japan’s equity markets will perform very well, at least respectively, over the next 5 years, as much of the world has given up on Japan.
Asia is still a favorite of Faber’s as a region to invest in…he thinks money that has been in the US and Europe for years will start to find its way over to Asia.
Final tidbit from Faber right at the end…he says Natural Gas is THE most undervalued commodity right now.
Again, you can catch the full interview here – it’s a good one.