As financial pundits and common investors breath collective sighs of relief that “the worst is over” and “the bull is back”, let’s explore the possibility that 2009 may be following a script that was originally penned in 1930.

After the initial crash in 1929, the markets staged a powerful rally that retraced 60% of these losses… 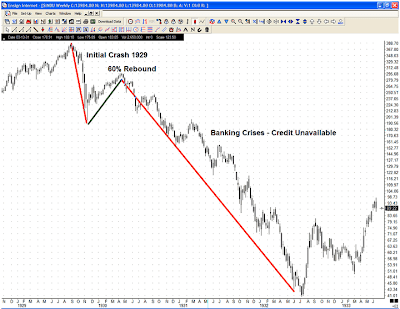 Images source: Mywealth.com
Since the March 6 lows, the 2009 S&P has also retraced a significant portion of its losses – rallying over 50% in the last 5 months – one of the sharpest rallies ever!
By the summer of 1930, just as the markets were peaking, Herbert Hoover and his team were declaring:
We are seeing the same types of self-congratulatory talk from our modern day heros in the summer of 2009:
What “solutions” were being heralded in 1930 as saving economic graces? “The coordination of business and government agencies in concerted action,” according to Hoover.
Sound familiar?
Finally, I find it very interesting that during these times, the Fed’s actions were viewed as wildly inflationist. From Murray Rothbard’s America’s Great Depression:

If the Federal Reserve had an inflationist attitude during the boom, it was just as ready to try to cure the depression by inflating further. It stepped in immediately to expand credit and bolster shaky financial positions. In an act unprecedented in its history, the Federal Reserve moved in during the week of the crash—the final week of October—and in that brief period added almost $300 million to the reserves of the nation’s banks. During that week, the Federal Reserve doubled its holdings of government securities, adding over $150 million to reserves, and it discounted about $200 million more for member banks. Instead of going through a healthy and rapid liquidation of unsound positions, the economy was fated to be continually bolstered by governmental measures that could only prolong its diseased state.

President Hoover was proud of his experiment in cheap money, and in his speech to the business conference on December 5, he hailed the nation’s good fortune in possessing the splendid Federal Reserve System, which had succeeded in saving shaky banks, had restored confidence, and had made capital more abundant by reducing interest rates.

Bottom line: While history may never exactly repeat, it certainly has a tendency to rhyme (to quote Mark Twain). Cast a skeptical eye on folks who believe that we’re through the worst – we’re not through anything yet!
Right now, we’re exactly on pace with 1930. While we can’t be sure that history will repeat (or rhyme) – it’s too early to rule out this possiblity as well. Proceed with caution!

Recommended further reading: How Herbert Hoover Put the “Great” in the “Great Depression”
Quick Market Hits for the Week Ahead
Positions Update
No new trades this week…I am less than thrilled with cotton’s weak performance. With oil and the S&P index hitting new 2009 highs, I would have liked to have seen cotton confirm these highs.
I don’t think it bodes well, but with cotton prices appearing to be at solid points of resistance, I think it’s a hold for now. 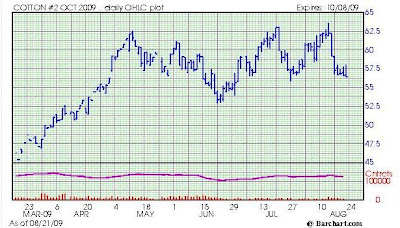