Natural Gas Falls Below $3! Why This May Not Be The Bottom.

Raise your hand if, a few years ago, you thought you’d see Natural Gas trading below $3 ever again. I never expected it. Yet here we are, just a few years after there was talk of “Peak Nat Gas” in North America, with the Natty sliding below $3.
And what a slide it’s been! 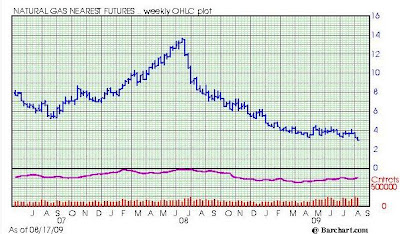 Turns out the cure for high prices was high prices.
(Source: Barchart.com)
This is why I don’t have a hard time seeing crude oil back in the $20’s or $30’s at some point. Peak Oil guys will get red in the face, saying how it’s impossible. In fact, check out the angry commenter on this $20 Oil post, who called me a Moron!
Now he may very well be right – but I can’t help but wonder that if high prices can bring so much Nat Gas on the market, what’s so different about oil?
What’s the downside on Natural Gas here? Obviously pretty limited – at most it’s $2.90! Not a bad lottery ticket to think about playing with hurricane season rolling around. Though I’d like to see some more negativity on this as a speculation, before I think about trading it myself.
Ever since the Natty broke $5, we’ve been hearing how cheap it was, how it’s a great speculation at these prices. Then it broke $4. Now it broke $3. Let’s see it break the back of a few more bulls before we take a look at this as a speculation.