No Fear, Again: Market Participants Are Opting For Extra Yield, Risk Be Damned

Last week, a buddy from college sends me an email:
“Hey, I got a little bit of cash sitting around, earning next to nothing in a savings account. Anything you’d recommend to get this cash working for me?”
“Not really – everything looks pricey right now…hey, does that mean you paid off your law school loans?” I asked.
“Actually no,” he informed me.
I suggested he may want to work down the debt first, no matter how low the interest rate.
Meanwhile, California pension funds are still counting on a cool 8+% annual return to deliver on existing obligations – based on historical returns, of course, which only includes the greatest bull market of several generations.
Anyone want to take the other side of that bet?
Not to be outdone, junk bond funds are back in vogue once again. And of course, the crappiest quality bonds are the hottest! 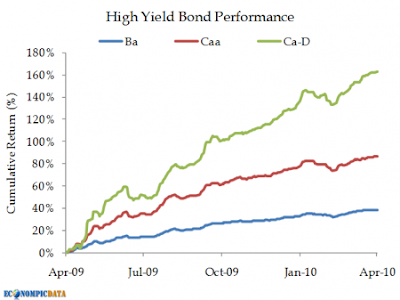 Chart courtesy of EconomPic Data.
It’s hard to believe that this time last year, we were talking about how Return OF Capital was the new Return On Capital!
So is everything rosy again, or is this “reach for extra yield” mentality exactly what a bear market bounce is supposed to engender during it’s final phases? My bet is on the latter, but in any case, we should find out soon!
Nothing To See Here – VIX Hits 18-Month Low
Volatility on the S&P is nowhere to be seen these days – perhaps the market crash was merely a figment of our imaginations! 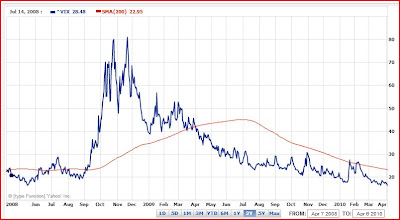 The VIX is low, and it continues to head lower.
(Source: Yahoo Finance)
As you can see from our experience in 2008, when the VIX breaks out, it breaks out in a big way. So a breakout on the VIX would be a good cue for us to start slamming the PANIC button as hard as humanly possible.
But for now, all is calm in the markets, as February’s drop now looks like a pebble tossed in the pond in hindsight.
The VIX could continue to head lower – who knows – but one would have to expect a spike in our future again sooner rather than later.
Scary Chart of Delinquency Rates Skyrocketing
Can you spot the trend? 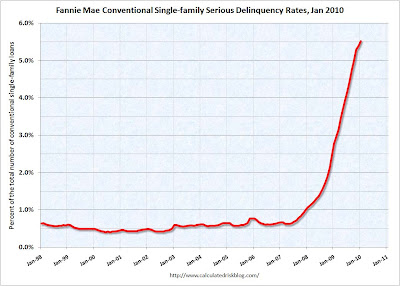 Chart courtesy of http://www.calculatedriskblog.com/
Hat tip to friend, reader, and monetary expert Dave for sending this gem along.
For further reading on the real estate trainwreck, check out this interview with real estate entrepreneur and guru Andy Miller.
The Hidden, Historic Bubble That Could Burst Any Day
Of course we’re talking about…
…all at once now…
Muni bonds!
Yay! Of course, municipalities far and wide have no way to pay back their increasing deficits amidst falling tax revenues.
Of course you knew this already, being an astute reader and no doubt a contrarian thinker. But the mainstream press is even starting to catch on.
The Contra Costa Times reports:

Declining income from property, sales and other taxes coupled with growing pension obligation debts and the residual effects of the financial meltdown are inflating a dangerous bubble in the $3 trillion to $4 trillion public bond financing market.

If the bubble bursts, agencies will be unable to borrow, and would cancel or postpone public projects such as school construction or building roads and highways. At worst, governments could default and upend the historically safe municipal bond market.
“This is the most serious municipal debt crisis in U.S. history, including the Depression,” said Denver-based attorney Jeff Cohen, who represents bond issuers and buyers. “Arizona has huge problems. So do Nevada, Illinois, New York and New Jersey. And California has the same credit rating as Kazakhstan.”
Small to mid-size public agencies, in particular, have been hit hard, said Cathy Spain, director of the Center for Enterprise Programs at the National League of Cities.
Not only has public agencies’ income dwindled, but they can’t even buy the bond insurance that would lower their borrowing costs. Most of the bond insurance companies, who participated in the mortgage-backed securities shenanigans, spiraled out of business during the bank meltdown.
Get your popcorn ready – this should be a doozy!
Also check out Robert Prechter’s thoughts on why you should run, not walk, from these “safe” muni bonds.
Why Marc Faber Is Predicting A Large Correction Right About…Now
About a month ago, Marc Faber told Bloomberg that we could easily see a correction of 20% if the S&P topped 1150 and approached 1200.
Well, it seems like we’re just about there, so we’ll see how Faber’s near term musings fare in the weeks ahead.
You can check out a video of Faber’s Bloomberg interview here.
Some other thoughts from Faber:
Faber’s book Tomorrow’s Gold is excellent by the way – if you haven’t read it, and you are a Faber fan, I’d definitely recommend you pick up a copy.
Interestingly Faber was a deflationist when he wrote the book almost 10 years ago, and has since flipped to the inflation camp, because he believes that sovereign printing presses will overwhelm broader deflationary forces.
Further reading: Why Marc Faber sees no way around US inflation.
A Few More Links, In Case You Missed Them
My Current Positions and Market Outlook
The trend of all markets still (yes, still) appears to be up, but the risk appears to be predominantly to the downside. The only trend that appears to have changed for certain is that of the dollar, which is currently taking a breather after a multi-month rally.

The US dollar’s trend is officially UP. It’s well above it’s 200-day moving average.
(Chart courtesy of StockCharts.com)
If the dollar is indeed the linchpin of the financial equation, then we’d expect the other markets to roll over one-by-one in turn here. We shall see if things play out this way.
(PS – Here’s why I concur with folks who believe the dollar is the linchpin of the global financial markets).
I am still in wait and see mode, with no long or short futures positions.
Have a great week in the markets!