Late last week, our good friend and fellow deflationist Carson sent over a link from Mish Shedlock’s blog, reporting a sharp annualized decrease in consumer and revolving credit.
I just plotted the Fed’s historical data since 1978 (which I chose because there was a single quarter anomaly in 1977 that I didn’t feel like dealing with).
First, we see that consumer credit, as of February 2010, is decreasing at an annual rate of 5.5%: 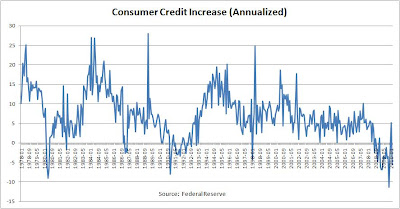 Consumer credit, after trending positive YOY in January, is once again heading south.
Next we look at revolving credit, where the data is even uglier, both in current and historical terms. Revolving credit decreased at an annual rate of 13%: 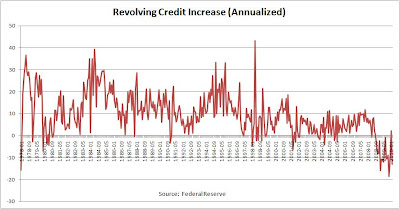 Will this debt ever be paid off?
The sharp decline in revolving credit, which is defined as credit that does not have a fixed number of payments or payment schedule (think credit cards), would appear to support the debt deflation argument (of Robert Prechter, most notably) that much of the current debt outstanding is going to go unpaid.
So while the government has engaged in quantitative easing to “ease” the issuing of its own debt, it has not yet offered to print up some greenbacks to pay off the debt of American citizens.
Thus far, it appears Americans are still choking on their massive loads of accumulated debt, unwilling to take on more credit, no matter what the Fed does.
It will be interesting to see if the Fed is able to reverse these trends.