Let’s give ourselves a double shot of dividend and share-price growth by diving into a group of stocks I guarantee your friends are missing out on.

I’m talking about financial firms—particularly those that buy back their shares. We want to get into these stocks now because Fed Chair Jay Powell just took the shackles off lenders when it comes to buybacks and dividends, after the nation’s 23 biggest banks aced their “stress tests.” (Prior to June 30, the amount a bank could put toward dividends and buybacks couldn’t be more than the average of its last four quarters of earnings.)

This means we’re lined up for a surge in bank-stock buybacks—and we love repurchases because they cut the number of shares outstanding, juicing earnings per share (EPS). Those fatter per-share profits are lures for investors, who bid up the share price in response, giving you a fat gain to go with your expanding payout.

And we’ve got a nice shot at buying repurchasers now because there’s a rotation happening: namely, after a long period of lagging the market, companies on the frequent-flier buyback plan are finally outperforming.

To see what I’m getting at, consider the performance of the Invesco BuyBack Achievers ETF (PKW), the benchmark for share repurchasers.

The ETF, which has the largest slice of its portfolio (27%) in financial firms, holds US companies that have bought back 5% or more of their shares in the preceding 12 months. Its top-10 holdings include insurer Allstate (ALL), financial-services firm Ameriprise Financial (AMP) and tech giant Oracle. (ORCL). 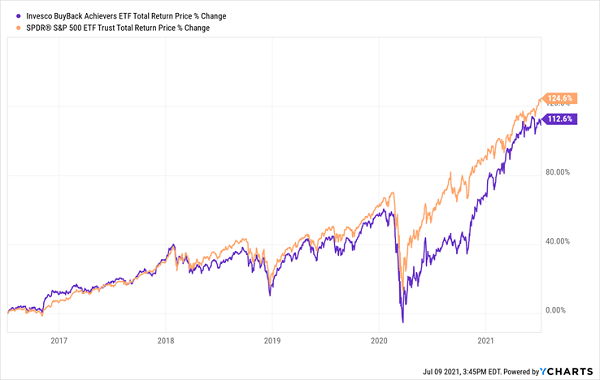 As you can see above, PKW (in purple) has trailed the market over the last five years. That’s an anomaly—with buybacks constantly juicing their earnings, the stocks in PKW’s portfolio should have an edge.

It’s a situation that can’t last—and in fact, investors are now fixing their mistake. Since the March 2020 crash, PKW has roared ahead, with most of its gains coming since late last autumn:

… But They’re Jumping Back Into the Lead 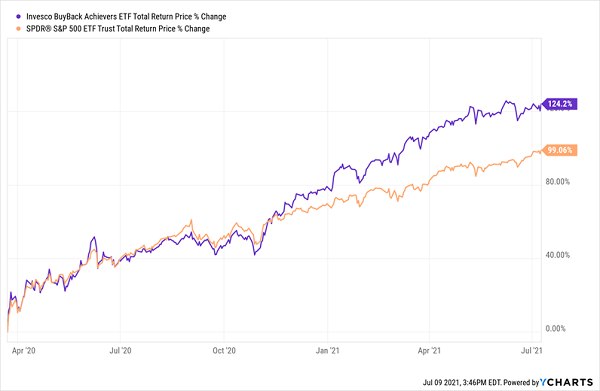 This, by the way, makes now a great time for us to pick up share repurchasers—just as they’re showing their “relative strength” against the rest of the market. We’re not, however, going to buy PKW—its 0.9% yield isn’t enough to get our hearts racing. Which is where our finance plays come in.

Playing the Rate Pullback (With an Assist from Share Buybacks) 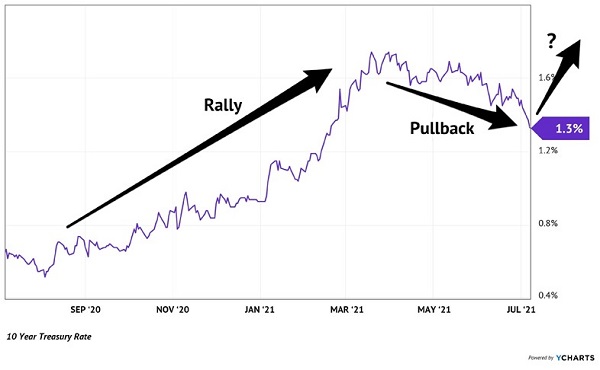 Think back three months. Back then, everyone in the financial world was betting on rising rates. Right on cue, 10-year Treasury rate went the other way. But now looks like a good time to bet that the washout is over.

That’s because, five years ago, the 10-year yield bottomed at the current level of around 1.3%. For the past decade, in fact, this has served as a reliable floor. Last year was the exception, but I think you’ll agree we can throw out most data from the ultra-weird year that was 2020. My bet is that the floor holds and yields bounce.

If so, bank stocks would see a nice profit jump as they cash in on the gap between the rate at which they lend to one another (the Fed’s near-zero overnight rate) and the rate to which they lend to customers, which is pegged to the (likely-to-bounce) yield on the 10-year.

And with a rate rise inflating their profits, newly unchained banks will be eager to reward shareholders with bigger buybacks (and higher dividends!), which would throw a strong lift under their share prices.

State Street Corp. (STT), which announced plans to hike its dividend by 10% in the third quarter, after it passed the stress test, shows this pattern in action: 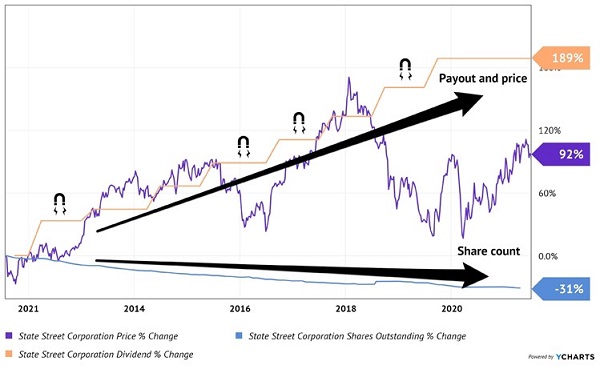 As you can see, State Street (current yield: 2.8%), has taken nearly a third of its shares off the market in the last decade. That’s helped drive its share-price gains.

Its soaring dividend (which has nearly tripled in that time) is also pulling in new investors. State Street’s runaway payout growth also means that anyone who bought 10 years ago is yielding a nice 4.8% on their original purchase today.

And, like clockwork, State Street’s dividend growth has pulled its share price higher with each upward tick, until mid-2018, when the two parted company. As I’ve written before, share-growth corresponds with payout growth in the long haul, and when a firm’s share price falls off the track, it’s a clear buying opportunity.

State Street’s bargain valuation backs that up: as I write, it trades at 13.9-times its last 12 months of earnings, so management has a shot at buying back shares at a great price here, particularly as analysts have pegged EPS at $8.65 in 2022, up 29% from $6.70 in 2020. State Street trades at just 9.7-times that forecast.

Where does this leave us? With a nice profit cycle: earnings at financial firms rise with the yield on the 10-year, which boosts their stocks and spurs buybacks and dividend hikes. That, in turn, lifts their stocks further (inflating the yield on your original buy). Rinse and repeat.

My top 7 stocks to buy right now are ALL primed for big buybacks and dividend hikes in the coming months.

The time to buy them is now—and front-run the rest of the crowd before these investor handouts are announced!

Doing so sets you up for a nice pop in your capital gains, and dividend income, as this cash flows to shareholders. The really nice thing is that you can tuck these 7 stocks away forever and they’ll keep boosting your income, while their buybacks drive your price upside and help shield you in market crashes.

I’m ready to share everything I have on these 7 dividend-growth plays with you now. Go here and get the full story on these 7 stocks, including their names, tickers my complete analysis of their operations and everything you need to know to start profiting with confidence.