You can double your money in perfectly safe, well-known dividend stocks. But only if you know the secret! Novice income investors gravitate toward higher current yields, but often that can result in hitching your sleigh to stagnant stocks with equally stagnant dividends.

For monster total returns, we want to pay attention to dividend increases. Because these hikes don’t just bump up the yield on your initial investment – they also trigger stock-price increases, too. If a stock is already paying out 3% but then juices its payout by 10%, investors will see that new 3.3% yield and buy more shares. That buying will drive the stock’s price up, and the yield back down, eventually toward 3%.

Just consider Visa (V), which almost always sports a current yield of less than 1%. Is it a dividend laggard? Hardly. As of November’s 19% jolt to the payout, Visa stock now pays 150% more than what it did in early 2014 … and shares have chased the dividend 175% higher!

Ignore Visa’s Tiny Yield at Your Own Peril 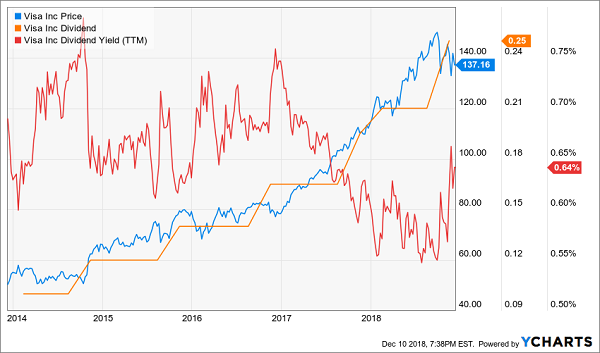 A laundry list of other dividend growers are about to shine. In fact, dozens of companies are expected to crank their payouts higher during the first month of the new year.

If you’re looking for other dividend powerhouses, look no further. I’m going to show you 28 stocks to put on your radar in January, including a close look at some of the more notable future raisers.

Master limited partnerships (MLPs) can be a chore thanks to their onerous taxation rules and the additional K-1 form you have to fill out come tax time.

But many energy MLPs are outstanding distribution raisers that can keep the spigot on even when oil prices are in a slump (just like they are right now). That’s because many of these companies are essentially just toll takers – they’re fee-based businesses such as pipelines that just collect money as oil and gas pass through their infrastructure.

This business is doing so well that several of them are hiking their distributions each and every quarter. Here’s a quick look at 11 that are on tap for increases shortly after New Year’s:

Dividend Spotlight: Enterprise Products Partners (EPD): EPD is one of the bluest blue chips of the MLP space. It has executed $38 billion in organic growth projects since it went public in 1998, tacked on an additional $26 billion in acquisitions in that time, and has another $6 billion in growth capital projects in the works.

Its operations are expansive, including:

It’s also a distribution powerhouse. It has been hiking its payout for 20 consecutive years, which is outstanding enough, but what’s truly impressive is that has come across 57 consecutive quarterly payout hikes. It’s not explosive distribution growth – EPD has averaged about 5.6% expansion over the past half-decade – but it’s consistent and reliable.

The Dividend Aristocrats aren’t always the best place to find lofty current income (unless you tap the High Yield Aristocrats), but there’s literally no beating them for longevity.

As a reminder, Dividend Aristocrats are companies that have raised their annual payouts at least once a year for a minimum of 25 consecutive years. Right now, that’s a list of 53 dividend stocks that have all maintained their payouts through at least the Great Recession, though many of them survived the 2000-02 bear market and other downturns, too. That’s impressive – and at least six streaks will become a little more impressive in January:

The stock, on the other hand … what it’s doing is pretty exciting.

For one, CINF is one of just a handful of success stories for a beaten-up financial sector. The broader Financial Select Sector SPDR ETF (XLF) is off 12%, led lower by miserable performances from the likes of Bank of America (BAC) and Wells Fargo (WFC). But Cincinnati Financial is beating it and the (lower) broader market with 5% returns, helped in part by a third-quarter report that saw it grow profits by nearly 45% year-over-year.

Cincinnati Financial Is a Bright Spot in an Ugly Sector 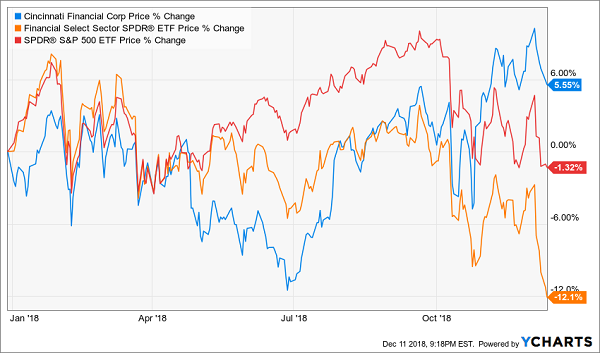 Also, Cincinnati Financial is just about a month away from its 58th consecutive dividend increase, expected to come in January. That’s a stunningly resilient payout – one that has survived six bear markets.

The Best of the Rest

January in general is a big month for dividend increases, with dozens upon dozens of companies expected to bump up their payouts. That includes everything from small regional banks to REITs to big, blue-chip companies.

The following set of likely dividend raisers covers several sectors, from tech to industrials to finance, as well as a couple of REITs: 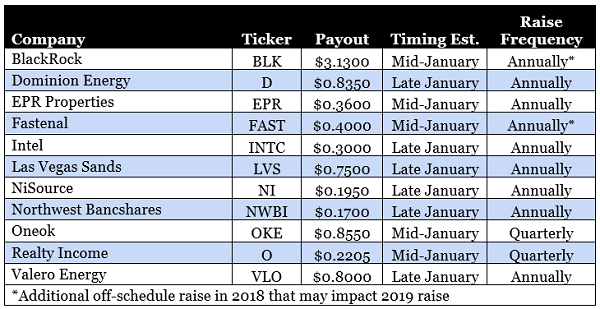 Dividend Spotlight: BlackRock (BLK): I want to highlight BlackRock – the global investment management company that’s responsible for the elite iShares ETF brand – for two reasons, including one that should interest every dividend-growth investor reading this article.

First off, if you’re a potential BlackRock investor, understand that the company has been working overtime on the income front. BLK’s dividend has been juiced by 86% in the past five years alone, putting it in a rare class of quick dividend doublers. There’s some price potential there, too. BlackRock’s share price has been pretty good about chasing its dividend higher, but the recent broad-market selloff has taken BLK with it and skewed this balance.

When BlackRock (BLK) Restores Order, Look Out Above! 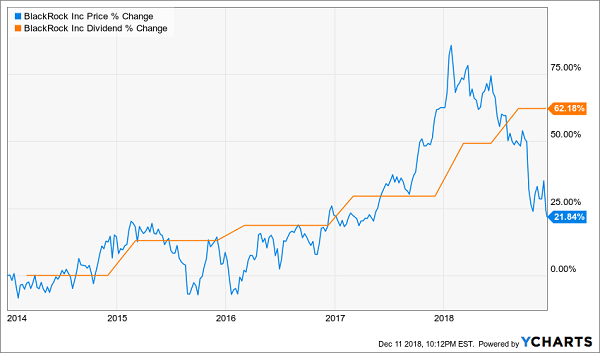 Second is something every investor needs to pay attention to when chasing dividend growers in 2019.

Republicans’ sweeping business tax cuts drove many companies to usher in major off-schedule dividend hikes, including BlackRock. BLK kicked off the year with its regularly slotted hike (15%, for the record), then announced in July that it would tack on another roughly 9%.

It’s possible, however unlikely, that some companies (especially non-Aristocrats) that doubled up on increases in 2018 might not raise payouts at all in 2019. What seems more likely is that several of these firms may unleash more modest hikes next year.

Don’t be discouraged. Companies felt incentivized, even pressured, to share the tax wealth in 2018. A lean 2019 might just be a natural counterweight. Look at the whole picture, or you risk overlooking some real income powerhouses.

Many of the dividend growers on this list will deliver sizzling payouts – if you give them several years to build up momentum. Right now, though, many of them actually deliver some pretty lean yields.

That’s fine by me. Because I’ve recently discovered a way to take low-paying and even non-paying blue chips like Alphabet (GOOGL) and Facebook (FB) and squeeze giant distributions out of them en route to nearly 30% in annual total returns!

I know it sounds crazy. But this is one of the best income opportunities I’ve come across in years – so much so that I’ve put my money where my mouth is and put my own personal accounts to work in it.

Even Wall Street’s most growth-first and income-last blue chips such as Google parent Alphabet can become “double threat” holdings that put traditional dividend payers like Procter & Gamble (PG) and Coca-Cola (KO) to shame. But you and I really can take stocks like Visa (sub-1% dividend) and Alphabet (not a penny in dividends!) and collect both double-digit upsides and 8%-plus dividends out of them.

This isn’t a complex options strategy. It’s not high-risk derivatives. It’s certainly not the “next Bitcoin.” This is a stunningly safe strategy that’s essentially the same as buying traditional American blue-chip stocks. In fact, I’ll even show you the four steps you’ll need right now: