On January 1, 2018, I made my boldest prediction of the year: bitcoin was going to crash. Here’s what happened since: 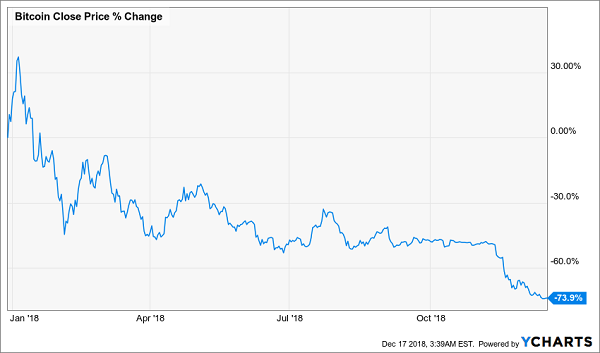 There are lots of reasons why bitcoin has cost investors a lot of money: it’s inefficient; it’s not private; and glitches and hacking cause people to lose bitcoins. But the main reason is this: the dumb money followed the smart money—and ended up holding the bag.

I’ve seen this story play out many times, which is why I urge you to be contrarian and avoid the traps market manipulators set up, whether it was dot-com stocks in the late ’90s, housing in the mid-2000s or fantasy Internet money in the 2010s.

The other side of this coin is why I’m urging you to do one simple thing in 2019: jump into tech stocks. And if you want dividends, don’t worry. I’ve got 2 funds offering 6.3% and 9.3% payouts for you to choose from.

I’ll show you both (and reveal the one I see as the best buy now) a little further on.

If there is anything you can rely on, it’s the ability of tech companies to print money, because the entire world is embracing technology to communicate, interact, trade, learn and buy new products.

The proof is in the numbers: while tech has one of the highest net profit margins of any S&P 500 sector, at 22.1%, its profits are actually growing: 100% of IT companies have reported earnings above estimates in the third quarter of 2018.

That’s right: not a single one missed!

If you looked at FAANG stocks over the last month, however, you’d get a very different impression. On average, these companies are down massively, due in no small part to the 14.5% drop from Apple (AAPL)—with only Facebook (FB) slightly above water (but it’s still down sharply for the year):

An Awful Month for Tech 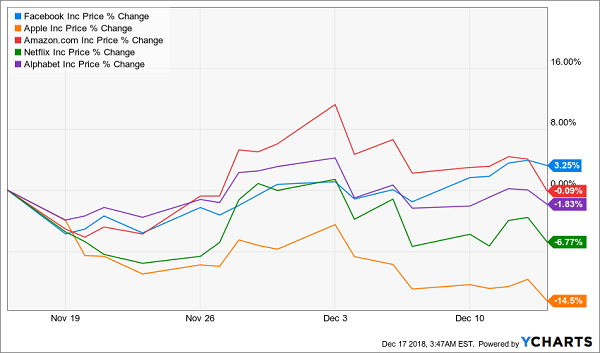 Zoom out a bit, however, and the picture is much rosier. FAANG stocks are still up double digits, on average, in a year when the S&P 500 is down: 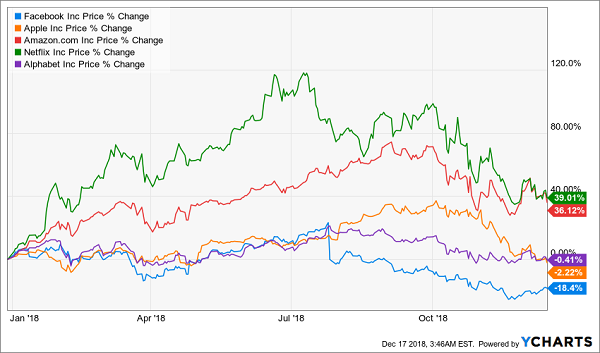 I wouldn’t be surprised if this news comes as a surprise to you. The financial press has been beating up on tech companies for a bunch of reasons—privacy scandals at Facebook and Alphabet (GOOGL), weakening subscription growth at Netflix (NFLX), the trade war for Apple—but the reality is that tech is still performing well.

But the market isn’t rewarding these stocks.

If we look at net fund flows for the Invesco QQQ Trust (QQQ), we see that $1.44 billion has left this tech-focused ETF in just the last three months. Since this is a popular ETF for tracking the Nasdaq 100, a tech-heavy index, those net outflows show the dumb money is panicking and selling off—the opposite of the setup that caused bitcoin to crash.

If we look at the Technology Select Sector SPDR ETF (XLK), things look even better for a contrarian. While hedge funds and institutional investors sometimes buy QQQ, these groups don’t use XLK quite as much. And this fund has seen billions of net outflows for 2018: a total of $2.44 billion has exited XLK in the last three months.

The conclusion is clear: the dumb money is exiting tech, which means there’s an opportunity to buy in before the pendulum swings back the other way and we see inflows.

Long-time readers know one of my favorite ways to play tech is through closed-end funds CEFs), because these funds hand you generous dividends while you wait for upside—and some tech CEFs have shown serious upside over the years.

But let’s look a bit closer at four options: the two ETFs I just mentioned (XLK and QQQ) and two CEF contenders. 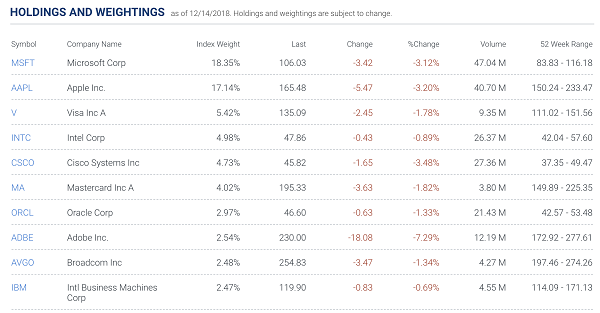 There are a lot of large cap companies in this ETF’s portfolio—household names that have been beaten up recently, but nowhere near as much as some tech stocks with smaller market caps.

Similarly, the other ETF, QQQ, sports holdings that are concentrated on many tech heavyweights, with some important differences: 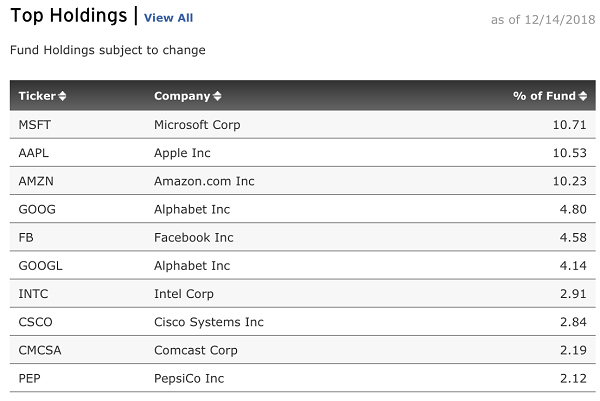 PepsiCo (PEP) and Comcast Corp (CMCSA) aren’t tech companies by any stretch of the imagination (and CMCSA is arguably one of the firms being disrupted by tech upstarts), meaning this portfolio doesn’t give as much tech exposure as XLK. If we want to just invest in tech, then, we should choose XLK over QQQ—but only if we’re going to limit ourselves to ETFs.

But I wouldn’t do that, because there are two better alternatives: the CEFs I mentioned earlier.

I’m talking about the Columbia Seligman Premium Tech Growth Fund (STK), which pays a 9.3% dividend, and the BlackRock Science and Technology Trust (BST), with a regular dividend of 6.3%. I’ve written of my appreciation for BST many times in the past; it’s up double-digits year to date, while STK is down 9%: 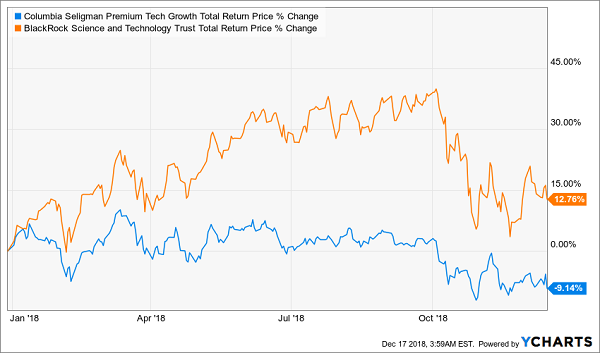 That doesn’t mean BST is the best choice now, though. To decide which is the better pick, we need to dig deep into each fund’s holdings.

Let’s start with BST, which recently made an aggressive bet on payments companies. That’s part of the reason why it’s been strong lately, as bitcoin failed to replace the payments solutions of BST’s major holdings, such as Square (SQ) and Visa (V). But this fund also has a lot of exposure to China:

In total, nearly 10% of the fund is based in China and focused on China-oriented companies. This is fundamentally different from STK, which is much more US focused, while also investing in hardware and payments:

… While STK Focuses on the US

STK’s portfolio is why I’ve favored BST throughout 2018: the cryptocurrency mania resulted in intense demand for hardware, but the crash in crypto also means that demand has evaporated in 2018.

As a result, chipmakers and similar firms have struggled, causing the semiconductor sector (seen below through the VanEck Vectors ETF [SMH]) to buckle in 2018: 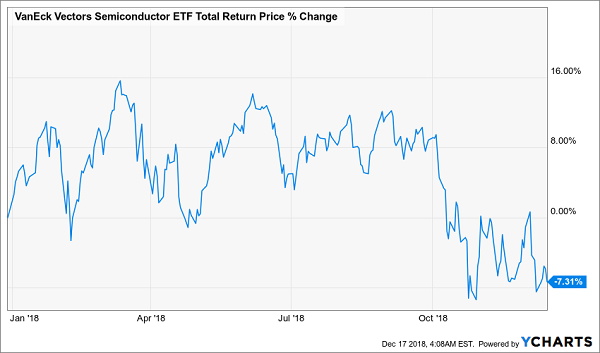 But now cryptocurrencies are no longer a factor in semiconductor companies’ performance—and that’s a benefit, not a liability. It’s also why now is the time to favor STK and put some money into this fund if you’re on the hunt for tech exposure.

The kicker? Its 9.3% dividend yield is an enticing income stream while you wait for the market to come to its senses and lift the semiconductor sector back to the valuations it deserves.

Here’s the thing about 8%+ payouts like the one STK drops into your pocket: the pundits will tell you they’re unsafe, but that’s nonsense!

The truth is, dividends like these are absolutely necessary if you want to achieve the “retirement holy grail”: clocking out and living on dividends alone. Because when your dividends cover your bills (and then some!) and roll in like clockwork, who cares what Mr. Market gets up to on a day-to-day basis?

This is how everyone should approach retirement investing. And the good news is that there are plenty of CEFs—like STK—throwing off rock-solid 8%+ payouts that will get you there.

But where do you start? Easy: with the 5 hidden gems—with an 8% average payout—I’ll reveal when you click right here.

And before you ask, no, you won’t give up a cent of upside to get your hands on the 8% average payouts these 5 funds deliver. Take a look at how one of these buys—pick No. 3, to be exact—has manhandled the market since inception:

Market-Crushing Gains and an 8.7% Dividend—in 1 Buy! 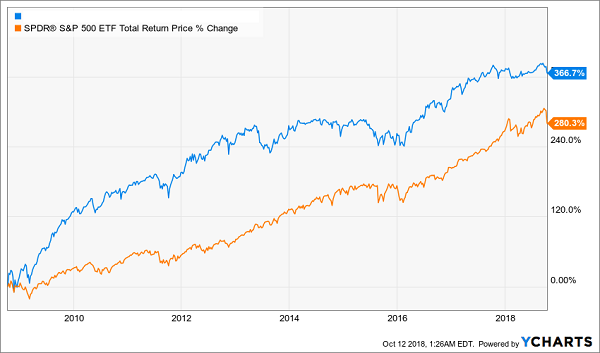 My paying subscribers already have insider access to this exclusive top-5 list, and now I want to let YOU in on it, too. Simply click here and I’ll give you everything I have on these 5 high-yield CEFs: names, ticker symbols, buy-under prices, current dividend yields and much more!