My No. 1 Secret for Big Profits in CEFs (works every time)

If I’ve heard it once I’ve heard it a thousand times: if you want big dividends, you can forget about getting big price upside, too.

Clearly, whoever came up with this “wisdom” is clueless about closed-end funds, where hefty 7%+ yields are common. Fast double-digit gains, too—especially if you follow the one true CEF profit indicator I’ll show you now.

It’s called the discount to net asset value (NAV), and you can find it on any online fund screener. In plain English, it’s the difference between a CEF’s market price and its “true” value—or what its underlying assets are worth.

It is, and your strategy for cashing in is, too: buy when the discount is weirdly wide, then sit tight as the herd comes to its senses, piles in and snaps the gap shut—flinging the fund’s price to market-beating gains.

(Often you don’t have to wait long, because there are 2 “override switches” management can throw to slam the door shut practically at will. I know that sounds crazy but it’s true; I’ll have more to say about these in a moment.)

First, it’s hard to overstate the earthquake a move in this one figure can cause.

Check out what happened to the Boulder Growth & Income Fund (BIF), a CEF Michael Foster, our in-house “CEF professor” pounded the table on in December (and I flagged as a great “buy-and-hold-forever” candidate again last week).

If you bought BIF, which follows the same strategies as one Warren E. Buffett, on Michael’s call, congrats! You kick-started a nice 4.5% dividend yield—more than double the payout on the average S&P 500 stock—and you got in at a silly 19% discount to NAV.

Put another way, you paid $0.81 for every dollar of assets! That’s a screaming deal for a well-run fund like BIF, and one that couldn’t last.

Predictably, it didn’t: the markdown now sits at 14.6%—still a bargain, though not quite the amazing deal it was in December.

Here’s what that subtle move in the discount did to BIF’s share price:

BIF Slingshots Past the S&P 500 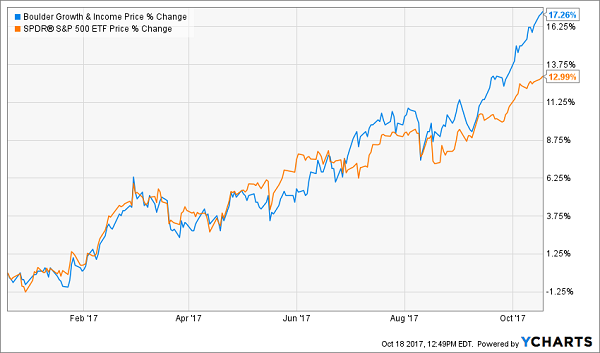 And as I told you last week, there’s more plenty more upside to come!

So forget about sacrificing income for gains. With CEFs, you really can have your cake and eat it too.

(By the way, this Wednesday, October 25, at 2 p.m. ET, Michael will reveal 2 CEF picks with even bigger upside in 2018, along with even fatter 7.1% average yields. Don’t miss it! Click here to reserve your seat in this free, live 60-minute webinar now.)

An Automatic Profit Switch for Management

As I hinted off the top, the great thing about CEF discounts is that you don’t always have to wait for the rest of the crowd to come to its senses. A smart management team can close up a fund’s discount all on its own.

The easiest way? Switch off the lights and close the doors. When management shutters a fund, they can liquidate its holdings and hand out the fund’s NAV per share to each investor in cash.

As a result, the price usually jumps to match the fund’s NAV (if the shares trade at a discount, which 77% of all CEFs do).

Pressure from activist Bulldog Investors pushed the Deutsche Global High Income Fund (LBF) to shut its doors on September 8. The fund had been trading at a discount to NAV, but the stock jumped to at $8.82 per share, matching its NAV, which was then paid out in cash.

And there are plenty of activists beyond Bulldog prowling the CEF space, locking in on funds whose discounts are dragging along the bottom.

As Foster mentioned in an August 3 article, Boaz Weinstein, who made a fortune betting against J.P. Morgan’s “London Whale” in 2012, just dropped a cool $1 billion into CEFs through his firm, Saba Capital Management.

Other bargain hunters to keep an eye on? New York State–based Karpus Management and England-based London Investment Group. The latter recently forced another CEF, the Thai Fund (TTF) to liquidate, slamming shut the fund’s discount and helping propel the price up 14% in just a few weeks (more on that, and 3 reasons why you should invest in Asian CEFs now, in Foster’s column tomorrow).

Even if they don’t push a fund to close its doors completely, activists often demand that funds narrow—or eliminate—their stagnant discounts by making a tender (or share-repurchase) offer at a price at or near NAV. We’ll move on to those now.

Well-timed CEF buybacks are gifts that keep on giving. Not only does the increased demand for shares put pressure on the discount window, it also lifts NAV per share as the shares are removed from the market.

Case in point: the JH Financial Opportunities Fund (BTO), whose management team has a keen eye for value, especially when it comes to the fund’s own shares. In 2016, management repurchased 10,000 shares, up from zero in 2015.

You can see why they held off two years ago: in 2015, the fund’s premium soared, hitting 7.1% by year-end. Too rich for this team’s blood! 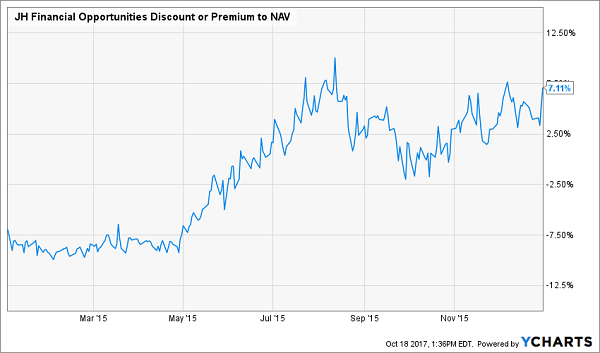 But when the fund’s discount sank to double-digit levels in early 2016, our team’s timely buybacks helped return it to a premium—and send its market price up 32% on the year!

A 32% Gain—With a Buyback Assist 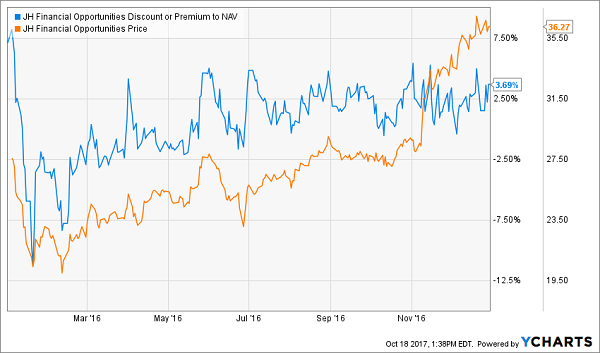 BTO now trades at a 4.2% premium—too high for the 3.9% yield you’re getting here, but the fund is worth a spot on your watch list—and backing up the truck if you see that premium drop into discount territory.

I want YOU to be one of the first to get your hands on them.

Think about that: at a 7.1% average yield, you’ll be clocking nearly 4 TIMES more dividend cash than your typical S&P 500 stock throws off.

In fact, that 7.1% is essentially what the S&P 500 returns in TOTAL per year in the long run, and you’re getting that in cash alone here!

Then there are the gains, because thanks to these funds’ MASSIVE discounts to NAV, you’ll be setting yourself up for easy double-digit price upside next year, too.

Because if you use the 5 simple steps Michael will reveal in this FREE 60-minute LIVE event, you’ll easily be able to pick winning closed-end funds like these yourself over and over again!

Don’t miss out on this one-time-only FREE live event. CLICK HERE to reserve your seat now!