Here’s Where to Find Easy Double-Digit Gains in 2018

At CEF Insider, we regularly pound the table on top-notch US closed-end funds (CEFs).

And we still see America as our “go to” for huge yields, income and big gains. But if you take a pass on other parts of the world, you’ll miss a proven way to cut your risk (thanks to the tremendous variety in the global economy) and big upside too.

That’s why we constantly keep our eyes trained on the horizon. And today, one particular place has caught our attention: Asia.

For a long time, Asian stocks were a sucker’s bet, for a couple reasons.

The biggest? Loose accounting made many of them way too dangerous. And the biggest ones were insanely complicated, making them nearly impossible to value and stunting the flow of profits to shareholders. 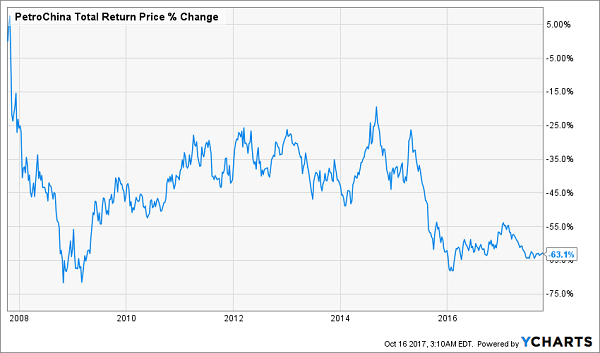 But things are changing, and we need to look at Asia differently. In a moment, I’ll give you 3 dead-giveaway signals that now is the time to make your move.

First, let’s look at what our CEF Insider data says about Asia-focused funds in 2017: 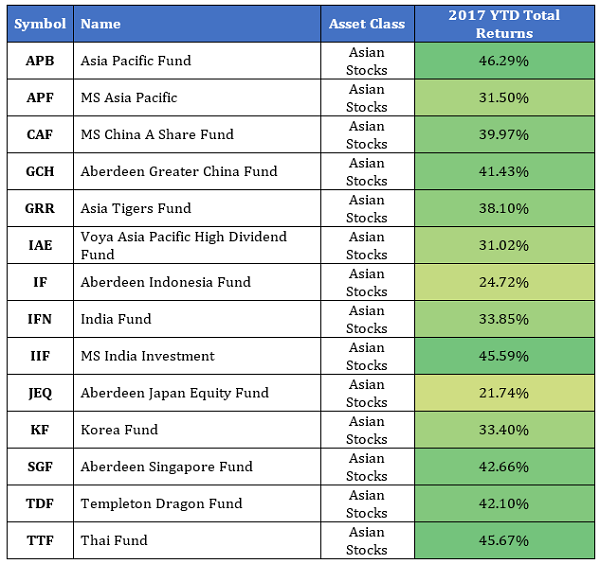 The bad news? Insiders have noticed—and they’re getting greedy.

Most recently, England-based City of London Investment Group successfully pressured the Thai Fund to shut down and liquidate. This is sad because TTF has crushed the S&P 500—and its gains have been accelerating in recent years: 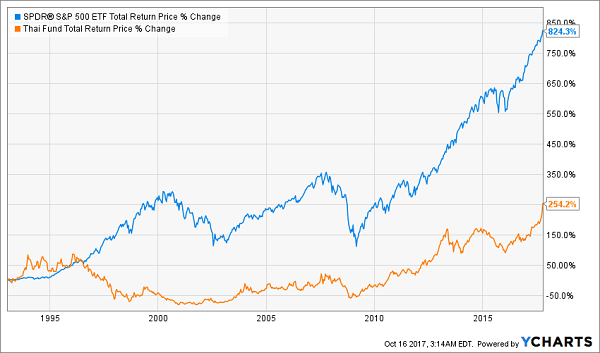 If you want to lock in Asia’s gains, now is the time to buy into other Asian funds before greedy hedge funds lean on them, too.

Here are three other unbeatable reasons to “buy Asian” now.

It’s no secret that the greenback is looking a little pale lately.

It’s fallen against most currencies, and particularly against emerging-market and Asian ones. The US dollar now buys 4.2% fewer Chinese yuan than it did at the start of 2017:

Lower Greenback Gives Us an In 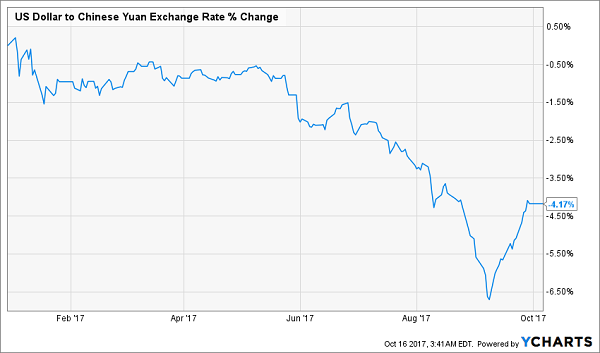 Notice that big dip and swift recovery in the last few weeks? That’s all about uncertainty surrounding how the Chinese yuan is going to be used abroad.

A year ago, the International Monetary Fund said it would use the yuan in its “special drawing rights basket,” a fancy way of saying more companies will be able to buy and sell in yuan. Only recently has the market started pondering what this means for the yuan’s value.

In this moment of uncertainty over the yuan’s future, we’re getting a respite from the dollar’s fall. That translates into a great entry point for us.

Why is a weaker dollar good for Asian companies?

For one, many borrow in dollars and earn money in local currency, so a weaker dollar lightens their debt load. Plus, since they report their results in local currency, a weak greenback pumps up their numbers from a US-dollar perspective.

The upshot? When the dollar is on its back, you need to invest abroad. Now is the time.

Buy Signal No. 2: Auditors Get Tougher—and Corruption Gets the Boot

A crucial development throughout Asia has been a clampdown on corruption and moves to bolster accounting standards.

Stories of dodgy accounting leaving investors holding an empty bag have left Asian companies red faced. Last year, NASDAQ said it would crack down on its Chinese constituents in response. That, plus pressure from international accounting firms caught up in the drama, caused many Chinese companies to change tack.

That’s come in lockstep with anti-corruption efforts in China, Indonesia and Malaysia that have made these countries a bit safer for investors. The crackdown is in early innings, but as these countries’ middle classes gain clout (and complain more loudly), it will speed up.

The least-talked-about development in Asia is happening in Japan.

They’ve chosen option 1, and it’s been great for the mainland. Japanese firms have been pouring into emerging markets like Thailand, Taiwan and even South Korea, which is quickly catching up to Japan. And when South Korea fully catches up, it too will need to invest more heavily in other Asian nations.

In fact, it already has: at the start of 2017, Samsung said it would invest $2.5 billion in its Vietnamese factories. That single investment will boost Vietnam’s GDP per capita by 1.2%, and it’s just the start. In August, Vietnam said it would record $16 billion in foreign investment in 2017, contributing 7.9% growth to the country’s GDP.

In the shade here is Japan’s quantitative easing (or the purchasing of bonds by its central bank), which has left the country awash in cash—and a lot of it has flowed to Southeast Asia. More is coming, yet the gains from all that investment are only now starting to register. You can bet they’ll flow to investors for years to come.

I want YOU to be among the first to get your hands on them. And it won’t cost you a cent to get the inside track.

Think about that: at a 7% average yield, you’ll be clocking nearly 4 TIMES more cash than most folks, who blindly stick with the misers of the S&P 500.

In fact, at a 7% yield, you’re getting the S&P 500 average annual TOTAL return in cash alone here!

Then there are the gains, because thanks to these funds’ MASSIVE discounts to net asset value (NAV, or the value of their underlying holdings), you’ll be setting yourself up for easy double-digit upside next year, too.

And that’s not all.

Because if you use the 5 simple steps I’ll reveal in this FREE 60-minute LIVE webinar, you’ll easily be able to pick winning closed-end funds like these yourself, over and over again. It’s like building your own continuous cash machine!

Don’t miss out on this one-time-only FREE live event. CLICK HERE to reserve your seat now!