There was a pause.

“Now get me another beer…”

His 40-year-old “boy” froze, then complied. I, meanwhile, busted out in laughter.

Is there anything better than a dad that likes to party? I challenge you to think of something while we discuss the next best thing.

Plenty of financial hucksters promise to reveal “the next Amazon,” “the next Facebook” or “the next Tesla.” We income investors know better, however. We can double our money—quickly—over and over again. We just need to find “the next Bank OZK.”

Wait … The Next What?

Facebook (FB), Amazon (AMZN) and Tesla (TSLA) are among three of the most widely held stocks in the world. I’m willing to bet that most people reading this own at least one of these stocks, if not two or even all three.

So, if these stocks are mega-growth stories, why isn’t every shareholder filthy, stinking rich?

Because to be a Facebook, Amazon or Tesla millionaire, one not only had to be lucky enough to have bought these stocks early… they also had to remain invested.

Sounds simple enough. After all—who in their right mind would have sold off any of these wonder-stocks midway through their meteoric rises?

Turns out, a lot of people.

You Want to Win Big in Growth? You’d Better Hold on Tight! 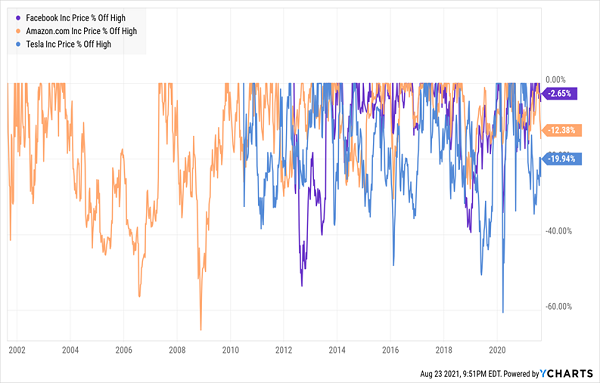 That’s a lot of passengers getting off before the end of the line.

And who could blame them? The only thing those stocks had to deliver was growth. So when growth looked fleeting, investors rightfully fled.

But if you surround yourself with stocks like Bank OZK? You’ll have an easier time hanging on and reaping all those returns over time.

Few writers are ever going to spill much ink over Bank OZK (OZK) the way they do over Facebook, Amazon and Tesla. And for good reason.

Bank OZK (formerly known as the Bank of the Ozarks) is just a large regional bank. It’s an impressive story—a small community bank that started with $28 million in assets and two locations in rural Arkansas now boasts $27 billion (with a “B”) in assets, serviced across 250 offices in eight states.

Here’s what Bank OZK doesn’t do:

And so, it mostly flies under the radar … 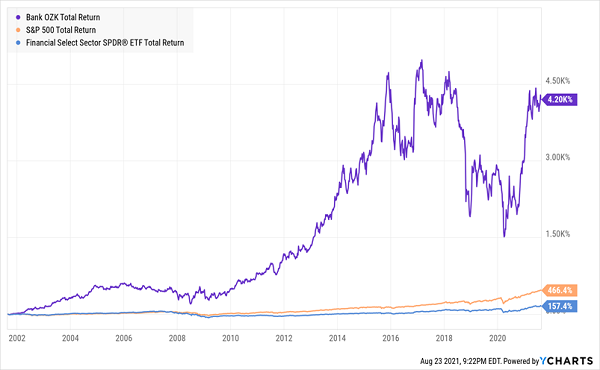 A combination of heavy M&A action as well as organic growth in the Sun Belt region the bank serves turned Bank OZK into a bank juggernaut that has slaughtered both the financial sector and the broader market over the past two decades.

But what makes Bank OZK stand out is that those returns aren’t just growth—they’re dripping with dividends. 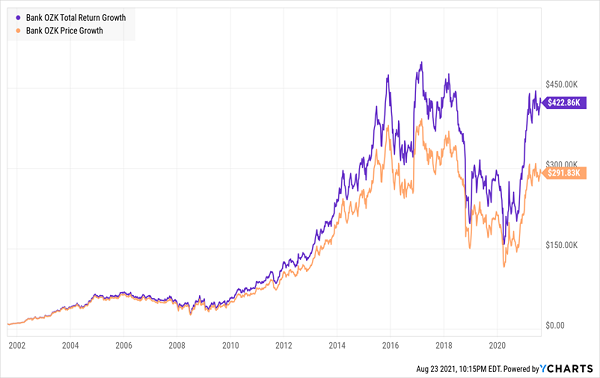 How has a company with a mere 2.7% yield managed to deliver so much in riches to shareholders?

Bank OZK has offered up a dividend since 1997. More impressively, the regional financial has upped the ante on that dividend for 44 consecutive quarters.

This isn’t just an occasional nominal uptick, either. Since inception, Bank OZK has juiced its payout by some 9,000%! And there’s still all sorts of pep in its step—over the past decade alone, OZK’s dividend has exploded to the tune of 470%.

Given that investors have a tendency to chase dividends higher, it’s fair to wonder whether this bank stock isn’t still a bargain despite a sector-beating run over the past 10 years or so.

If OZK’s Price “Catches Up” With the Dividend, Watch Out! 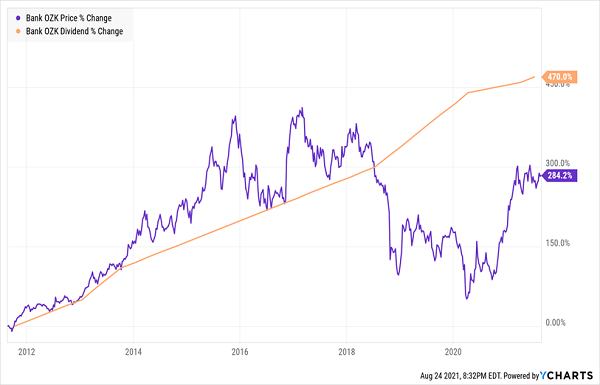 More amazing still? This kind of breakneck dividend growth is a lot more common than you think. The key to finding the “next Bank OZK,” of course, is discovering stocks with both a proven track record of dividend growth—and the means of keeping it up. 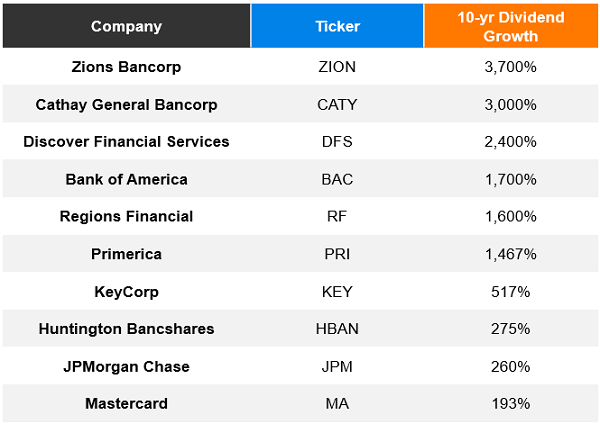 But there’s a big, fat asterisk attached to most of these names. The past 10 years goes back to 2011, when many of these banks were just beginning to repair their payouts after having slashed them down to a penny per share (or nothing at all) during the financial crisis.

However, if we look outside financials, we can still find a few truly impressive dividend growers that are often overlooked by Wall Street pundits.

Most readers are no doubt familiar with Morningstar’s stock-and-fund data service, which is among the most respected in the world.

But you’ll be hard-pressed to find many people talking about its stock. No big surprise there, as it is only slightly better than the market over the past decade or so. Still, it’s worth a quick gander. Dividends have shot up by 530% in that time, and MORN still has plenty of ammunition for more, given a payout ratio of just 22%. Just be careful here—earnings estimates are difficult to come by for this stock making it difficult to peg a solid value on it. 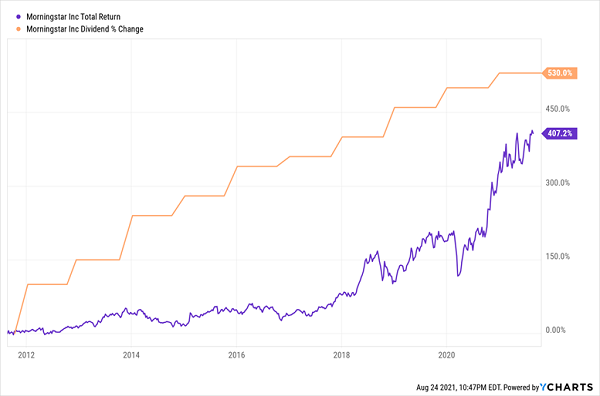 There’s also Sonic Automotive (SAH)—a large automotive retailing outfit. Its operations consist of more than 100 franchised dealerships across the country, as well as EchoPark Automotive, which specializes in 1- to 4-year-old pre-owned vehicles.

SAH’s dividends have jumped 380% over the past 10 years, and while it doesn’t look like a roaring catch-up story—shares are up about 340% in that time—it might be worth a deeper dive. Shares trade at just more than 7 times estimates, and despite its payout growth, management is quite conservative, paying out just 6% of profits at present. (Just note that SAH is a “chunky” dividend raiser—you can’t count on consistent hikes every year.)

Another underappreciated business that prints money like it’s going out of style is the Westinghouse Air Brake Technologies Corporation… better known as Wabtec (WAB, 0.6%).

Wabtec is, succinctly, a train company. It not only builds components for locomotives, freight cars and passenger cars, but it also manufactures several types of locomotive.

I love specialized businesses like Wabtec, as competitors are typically few, and barriers to entry are high and numerous. I also love WAB’s 700% headline dividend growth over the past 10 years… but I don’t love how it has gotten there. 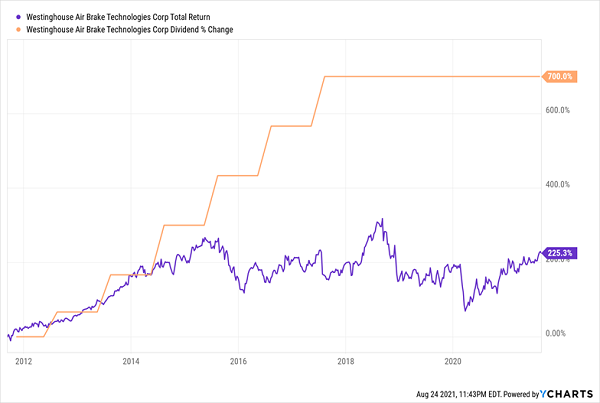 Despite having plenty of room to improve the dividend (Wabtec pays out less than a quarter of its profits), the cash has remained stagnant for years. It’s no surprise, then, that shares have followed suit.

But if you want a truly breathtaking number, consider Pioneer Natural Resources (PXD, 2.2% yield). This independent exploration and production company owns some 920,000 net acres in the Permian Basin, and it stands out as one of the energy sector’s few truly aggressive dividend payers of the past few years. 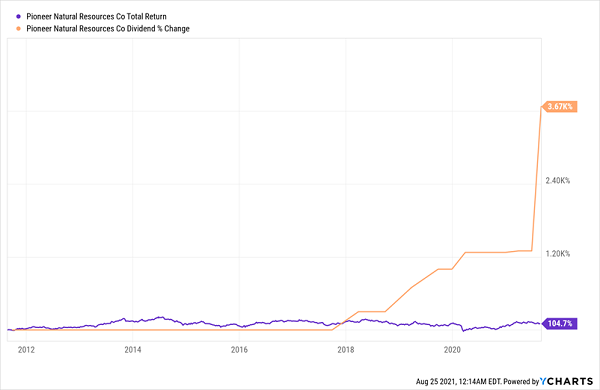 PXD’s dividend growth now stands at a whopping 3,670% over the past 10 years. There’s something of an asterisk to that, but it’s not necessarily a bad thing.

Pioneer spent the past few years bolstering its dividend from 4 cents semiannually as recently as 2018 to 56 cents per share quarterly as of this year. But that 56 cents is now considered Pioneer’s “base rate”—the company recently announced its first inaugural variable dividend, of $1.51 per share. PXD plans to pay out up to 75% of annual free cash flow after the base dividend going forward.

If these payouts continue at the current rate, PXD’s dividend will shoot to roughly 5.6% at current levels. That’s a significant income upgrade, though growth in the payout going forward will be heavily tethered to energy prices.

I’m sure you see The Great American Reset taking hold all around you. The stores and restaurants you drive by today are hurting. How many will actually open on the flip side of COVID?

Meanwhile, the stock prices of “Reset plays” like Amazon (AMZN) and Shopify (SHOP) continue to rise into the stratosphere. Which brings us to our big quandary:

The Great American Reset is indeed a “thing.” But how do we safely invest in it?

Neither of these darling stocks pays a dividend. Both trade at white-hot earnings multiples. And Amazon in particular is under the federal government’s antitrust microscope.

Many investors are buying shares and hoping they continue higher. No thanks.

If we want to stay on the right side of the rest, we don’t want to find “the next Amazon.” Instead, we want to look for the stocks—dividend payers, of course—that are providing the “picks and shovels” powering the Reset.

During the gold rush of the 1840s, hordes flocked to California to get rich mining for gold. But the guys who made the real money didn’t actually mine anything. They were the entrepreneurs who sold the “picks and shovels” as well as booze, entertainment options and lodging to the hapless speculators.

We’re seeing the same phenomenon unfold in 2021. We’ll let the first-level types gamble with their dividend-less Amazons and Shopifys, while we calculated contrarians identify the pick and shovel payouts that:

And by the way: The valuations of the Reset-winner stocks we’re considering are quite reasonable, improving our chances of enjoying outstanding, market-clobbering long-term total returns.

That’s too bad for the mainstream financial types who overlook them, but just right for us.

Click here, and I’ll explain more about “The Great Reset,” including my 7 favorite dividend stocks to capitalize on this once-in-a-decade opportunity!