You know a top just HAS to be near!

I know I’ve been early on this call – or wrong (same thing) – for a few months now. But this had to take the cake.
There I was, tying the laces on my sneakers, getting ready to walk my dog Banjo on this crisp, cool 34 degree Sacramento morning. And there they were on the Today show, yucking it up about the rising price of gold!
Here’s my re-enactment of the conversation:
***
Gal Who Replaced Katie Couric: And gold continues it’s rise this morning. How about that for a Holiday gift!
Token CNBC Money Honey: That’s right, gold has climbed past $1200 per ounce, and there appears to be no end in sight!
Gal Who Replaced Katie Couric: What’s driving gold’s rise?
Token CNBC Money Honey: Well it’s really being driven by the weak dollar.
Me: Agh!!!!!!!!!!!!!!!!!!!!!!!!!!!!!
***
Look – the dollar is not GOING to crash – it has ALREADY crashed! 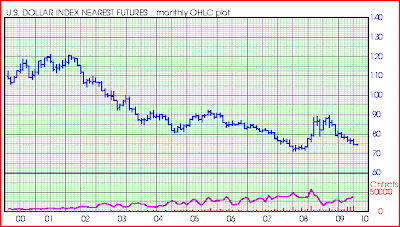 To paraphrase Bruce Springsteen – the dollar’s been going down, down, down since 2002.
(Source: Barchart.com)
The Today Show/CNBC failed to mention that despite all of the pessimism on the dollar, it has still not dropped below it’s 2007 levels. A breach of which, by the way, would cause me to scream Uncle and admit I was wrong.
But when Matt Lauer & Co jump on the rising gold/falling dollar trade, one would have to believe that this trade is pretty well played out. In fact, I see that gold and stocks are retreating since I saw the TV clip. How poetic would it be if gold topped on the exact day of this clip?