Dubai’s Meltdown
The Thanksgiving holiday is traditionally a very slow time for the markets…not so this year! Dubai rocked the financial world with its announcement to debtors that it needed a bit more time to make good on outstanding debt payments.
Uh oh – here we go again?
Global markets reacted quite violently to the news, throwing up with the vigor of a hungover Wet Wednesday reveler. The real news here is not Dubai in and of itself – a debt bender from a pretty small country can’t do that much damage alone to the global financial system. But, if this is a harbinger of more sovereign defaults to come, then now may be the time to beat the Holiday investor crowd and check into the debt rehab clinic!
Is fear back in the markets? It’s been a bear market in fear since the March lows – perhaps it’s time for fear to bounce back. This week will sure be interesting.
What happens if fear bounces back? We’ve seen this playbook before, as Mr. Market has already given us a sneak preview…
All Markets are Driven by Liquidity Flows
Friday was a classic fear driven day lately, with the dollar rallying, and everything else dropping. This is the “All The Same Markets” theory we’ve been following closely for most of 2009, originally popularized by one of our favorite gurus, Robert Prechter.
Most people see that the asset markets are interconnected – it’s the old reflation/deflation trade. But, why does the dollar move counter to all of these other markets?
The “flight to safety” explanation is a popular one, and I personally think it’s as wrong as it is popular.
The reason the dollar rallies is not because it’s perceived a safe currency, but paradoxically because it’s the sickest one. The reason is that most of the debt in the world is denominated in US dollars. When that debt goes “poof” – that is, the borrower defaults, and the money that once was there ascends up to money heaven – the supply of money goes down.
When liquidity tightens, this debt can go “poof” in a hurry, as we saw during the last leg down of the stock market. This is highly deflationary. And, because most of this debt is denominated in dollars, the supply of US dollars drops, and the value of each remaining dollar goes up.
But Can’t the Fed Print Money and Reflate?
Yes, but there are limits to what the Fed can do, at least in the short term. Even an expert money printer like Ben Bernanke has constraints – he’s only human, after all.
When you consider the sum of outstanding credit is somewhere in the neighborhood of $50 to $100 trillion (give or take a trillion or ten), it makes the money the Fed has printed so far (a trillion or two) pale in comparison.
Can the Fed inflate eventually? Sure – but probably only after all of this bad debt has been destroyed. This could take a few years, and there will be some wicked asset deflation in the meantime.
(For further reading, check out Terry Coxon’s article: When Will Inflation Really Hit Us?)
First Dubai, Then Greece?
Greece is warming up in the on deck circle, as it tests the levels of sovereign debt, writes Ambrose Evans-Pritchard for the Financial Times.
Evans-Pritchard reports that Greece is “disturbingly close to a debt compound spiral,” – and the bond vigilantes appear to be circling the wagons.
S&P Fair Value: Lower Than Current Levels
My good friend, regular reader, and private wealth manager Jonathan Lederer put out an excellent quarterly update for his clients last week, in which he analyzed the valuation for the S&P 500.
Jonathan is a very sharp value investor who has the patience and insight to perform excellent valuation analysis on equities. I always benefit greatly from absorbing his research, which is often a great counterbalance to my views.
He’s been kind enough to allow me to share his presentation with my readers, which you can view here…I would definitely recommend you spend some time to watch his quarterly update.
Spoiler alert: Jonathan concluded that the market valuations are a bit rich at current levels, which concurs with my thinking and belief that the market risk right now is to the downside.
Positions Update – Still Really Short the S&P, Long the Dollar
And we continue to wait for these trades to go our way…was Dubai the opening shot in the next wave of deflation? The next week should be quite interesting! 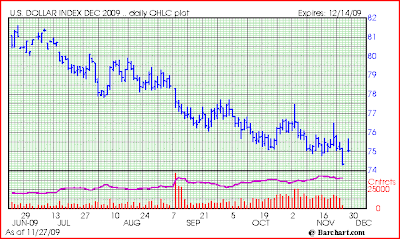 Was last week’s downtick the bottom for the dollar?
(Source: Barchart.com) 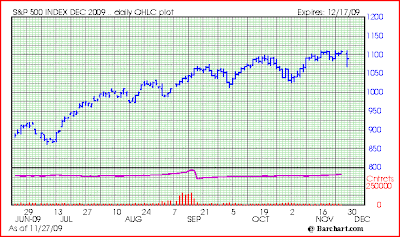 The S&P rallied off it’s deep lows on Friday, but still closed down big on the day.
(Source: Barchart.com)
Open positions: