A few months back a friend mentioned an obscure trading book to me, citing it as one of the best trading books he’s ever read, despite the fact that very few people have ever heard of it. Since this guy is a top notch trader in his own right, I made a mental note to add this book to my reading list.
This weekend I read Trader Vic: Methods of a Wall Street Master

cover to cover, and have to agree it’s a fantastic read – one that I think our regular readers will definitely enjoy. It’s authored by legendary trader Victor Sperandeo, who tells all for 260 pages. Think of the insight contained in each interview in Market Wizards: Interviews with Top Traders

, but in even more detail.
Sperandeo categorizes market participants into three basic types:
He identifies himself as primarily a speculator, but one who plays all three trends, which he jokes might make him a “speculative trader who also invests.”
What I found so great about this book is that Vic does not hold up any one theory or technique as holding the secret to investment success. On the contrary, he cites this as the flaw of most investment books – so, he set out to write one that would combine technical and fundamental analysis, with a healthy sprinkling of probabilities and risk management.
The key takeaway is that investing/trading is a game of probabilities. Your goal, as a market participant, is to maximize your probability of success on each trade, while simultaneously optimizing your risk/reward on that trade.
For much of the book, Sperandeo shares, chapter by chapter, the considerations he uses when placing his positions. He holds Dow Theory in very high regards, using it as a strong guide (but never an absolute indicator). He also uses basic technical analysis, saying its greatest value is that it “provides a method of measuring the tendency of the market to react in a particular way under similar conditions throughout history.”
He does not rely on complex technical analysis though, and instead pokes fun at the die hard practitioners. Fellow fans of Elliott Wave Analysis may be a little disappointed that Vic does not regard it as particularly useful.
However Vic has no shortage of additional insights to share that compliment his use of basic technical analysis. He discusses how he identifies a change of trend, which he believes is “the fastest and most risk-free way to make money in the markets.” He shows you how to draw and trendline and make use of moving averages and oscillators – again for framing your trading decisions, and not as an absolute guarantee of success.
As most astute traders seem to be, Sperandeo has deep rooted libertarian views. He is not a fan of Keynesian Economics (to put it lightly), and properly lambastes this school of thought for the fraud that it is…ending by basically saying that this is all going to end very badly.
Last but certainly not least, the second portion of the book is dedicated to helping you get your mental and emotional house in order. Vic says that out of 38 people he trained in the 1980s, only 5 made money and went on to pursue their own careers as traders?
Why such a low success rate? He cites the difference between success and failure in trading as “neither intelligence or knowledge to trade, but the will to execute knowledge.”
In other words, the unsuccessful traders were not so because they lacked knowledge – it was because they couldn’t keep their heads about them and stay disciplined in the heat of the moment!
This discussion of personal discipline and beliefs is very valuable, and similar in flavor as what Van Tharp advises and schools traders on.
In summary, whether you are primarily a trader, specular, or investor, Trader Vic: Methods of a Wall Street Master is a fun and enlightening read. I’d highly recommend you add it to your reading list.
What Does Trader Vic See Ahead for 2010?
The one thought that kept floating through my head while reading Trader Vic was: “Man, I’d love to hear what this guy is thinking today!”
Well, as luck would have it, our friends over at Hard Assets Investor just caught up with Trader Vic last week!
Lara Crigger, associate editor, HardAssetsInvestor.com (Crigger): Which commodities do you think are going to do well next year?
Victor Sperandeo, “Trader Vic” (Sperandeo): Well, I’m on record across the world as saying that gold is the best investment in the world for the next two to three years. It’s fundamentally obvious, but when you’re printing huge amounts of paper vs. something that is considered money, the paper will depreciate and the hard assets will go up. So gold and silver will do well—silver a little less so—but gold certainly.
Even when it was about $830-$850/oz, I basically said, “I don’t see any scenario where it can come down.” But I wouldn’t say that it can’t correct at any given moment. When the Fed decides to raise interest rates, at that point, gold will sell off. It will be a steep correction.
But it’s also a buying opportunity, because if they raise rates, it would only be to try to stabilize the dollar. But it wouldn’t affect the kinds of huge deficits and the printing of money that’s going on for the next 10 years. It’s unsustainable. So gold, that’s my most favorite, if you will.
Read the rest of HAI’s interview with Trader Vic here.
The Latest At-Home Party Craze: Gold Selling
So is the gold market getting overheated, or not? The opinions on both sides sure are polarized.
Some, like our pal Trader Vic, insist this isn’t a gold bubble. I was listening to the Financial Sense Newshour yesterday, and they agreed, saying we’re not even close to the mania stage yet.
On the other hand, our local rag, the Sacramento Bee, reports that “the latest at-home party craze is gold selling.”
Move over, Tupperware, candles and kitchenware.

Whether spurred by cash-strapped consumers or the alluring jump in gold prices, the concept is enticingly simple: Bring your tangled chains, broken bracelets, outdated earrings or a hoop that’s lost its mate. Even dental fillings or an ex-boyfriend’s heart-shaped pendant. Your stash of unwanted gold is tested, weighed and traded on the spot. For cash.

And with gold briefly sweeping past the $1,200-an-ounce mark in recent weeks, it’s becoming an even more tantalizing invitation. Here and across the country, it seems, old gold is turning into green.

If not a bubble, then we’re at least overdue for the current correction, which we’re about $100 into so far. And surprise, surprise – look at the gold bull that predicted this correction a few weeks back…our hero, Jim Rogers…
Correction: We’re Not Trading Against Jim Rogers After All
On Sunday, I mused that one of my deepest concerns about being bullish on the US Dollar is that I’m on the opposite side of the trade from Jim Rogers, who thinks the buck is doomed.
Not so, pointed out astute reader Sibbie via email, citing a recent Rogers interview in BusinessWeek:

Q: How much of the runup is being driven by U.S. deficits and the weakening dollar?

Jim Rogers: A huge amount is about not just U.S. deficits, but all deficits. Deficits are going berserk nearly everywhere. Throughout history, printing money has led to weaker currencies and higher prices for real assets. And there are many, many pessimists about the dollar, including me. So many pessimists that I suspect there’s a rally coming. I have no idea why there should be, but things do usually rally when you have this many bears at the same time. I’ve actually accumulated a few more dollars. I mean, it’s not a significant position, but I do own more dollars than I did a month ago. And we’ll probably also have a gold correction because there’s so many bulls on gold.
Nice find, Sibbie, thank you!
You can read the rest of Jim Rogers’ interview with Maria “Money Honey 1.0” Bartiromo here.
Positions Update – Still Really Short the S&P, Had to Roll the Dollar Contract
On Friday I had to roll my dollar contract, and then realized I didn’t have enough margin to buy back in…oops! So I’m still holding the S&P shorts and puts, and am waiting for a re-entry point on the long dollar side.
We had a nice week of gains on the dollar, and we may be due for a short-term pullback, so I’ll wait patiently, and hope for the S&P breakdown that we’ve been waiting for.
What’s reassuring is that nobody seems to be a believer that this is the start of a dollar rally. That’s just the way we like it. 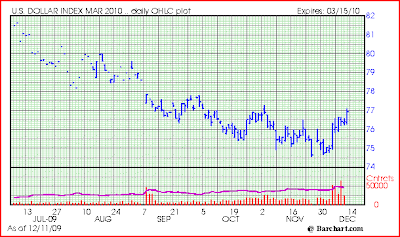 A strong week for the dollar – looks like the bottom may finally be in place.
(Source: Barchart.com) 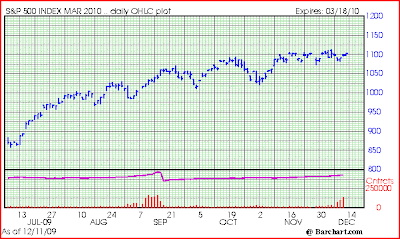 The S&P continues to defy gravity – but its time may be limited, if the dollar has indeed put a bottom in.
(Source: Barchart.com)
Open positions: