I think we’re at a key inflection point in the financial markets at this juncture. The direction that things head next could decide the winner, at least for the next few years, of the inflation vs. deflation battle.
So I spent the morning revisiting and rereading many of my favorite arguments from both sides of the debate, and came up with three key metrics for us to revisit.
First, let me lay a little groundwork and list my preexisting assumptions:
When revisiting my favorite arguments for both sides, I noticed that three central themes were the focus of much of the debate:
Checkpoint 1: Inflation requires an increase in bank lending
Thanks to the wonders of our fractional reserve banking system, where banks are only required to have a fraction of the money they lend out, bank lending has a tremendous multiplier effect on the money supply. During times of expanding credit (2002 – 2007 most recently), this effect was felt in full force, as loose credit led to a bubble in nearly all asset markets.
Since the credit crisis began, banks have significantly curtailed their lending. While the Federal government has boosted the balance sheets of the big banks, there has not been a proportionate growth in loans (see chart below).

Source: The Daily Reckoning
Herein lies the rub – bank lending has not picked up, at least yet. Check out the graph below, courtesy of the St. Louis Fed: 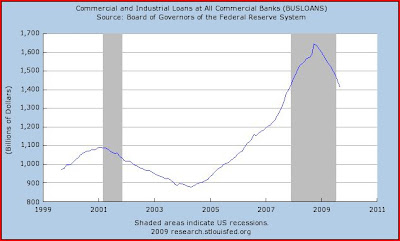 Conclusion: As long as bank lending continues to decline, it’s difficult to make an argument for inflation. However, if and when this chart begins ticking up once again, that will be a strong indicator that inflation may be on the way.
Checkpoint 2: The demand for money and prevailing social mood
From World War II until 2007, the world was a place of expanding credit. This growth was driven by consumer demand for credit, which was particularly strong in the US. That is the key point – that the growth was driven by from the demand side, which in turn, resulted in increasing supply.
While many blame Alan Greenspan for creating a housing bubble this decade with artificially low interest rates, it’s important to consider the role that consumers played in that spectacle. Greenspan was only giving the populace what it wanted – more credit. He may have spiked the punch bowl, but only at the insistence of the drunken party goers!
Today, with mortgage rates still near historic lows, we have no housing bubble any longer. In fact, we have a plummeting housing market. Why?
Because there’s no demand for credit. Consumers are choking on debt – they are screaming “No Mas!”
Can the Fed inflate the asset markets one more time? They are trying like hell, but they’ll only be successful if the social mood in the United States permits it.
One of the major reasons Japan was never able to reignite another bubble after 1989 is that the mood of consumers permanently shifted. The demand for money increased – consumers wanted to hoard it. They did not want to speculate, or trade it in for assets.
Did the social mood of the US permanently change in 2007?
One tea leaf worth paying attention to is the demographics card. By 2007, the US had some noteworthy demographic parallels with Japan of 1989 (ie. we’re getting old). Though we are not “as screwed” as Japan in terms of demographics, thanks to immigration and somewhat higher birth rates, we’ve peaked demographically as a country, at least until further notice.
Conclusion: Demand for money, and social mood, are admittedly challenging to measure in an objective manner. There may have been a permanent shift in 2007 – if so, the Fed may find that, like Japan, it’s “pushing on a string” in terms of trying to change consumer behavior and attitudes towards debt.
Checkpoint 3: Monetary goosing will show up in stocks, especially financials, first
According to Milton Friedman, the script for inflation roughly goes like this:
Sure appears like the script is playing out to a tee. With regards to stocks, we’ve seen that financial stocks have been the strongest performers, which you’d probably expect in an inflationary boomlet.
But – this market rally has, thus far, only qualified itself as a stellar bear market bounce. We are still in typical retracement territory. Bounces usually retrace roughly half of their losses – often even more. The 2009 bounce is currently eerily similar to the 1930 bounce in terms of magnitude.
Conclusion: The jury is still out on what has actually driven this stock market rally. We could be at an important inflection point. If the market continues to head higher, the case that it’s being driven by inflation will strengthen. If it makes new highs, that would probably seal it.
On the flip side, if the market turns down from here, then all we saw this summer and autumn was a classic bear market bounce.
Bottom Line: The coming months will be very interesting, and hopefully quite insightful, in terms of illuminating which side is winning the inflation/deflation battle. It’s too close to call just yet in my opinion, as both scripts have been fulfilled thus far. But we could be near a fork in the road!
Some More Good Reading
Positions Update – Still Long the Buck
It looks like the broader markets may, at last, be rolling over. Which should be bullish for the buck. 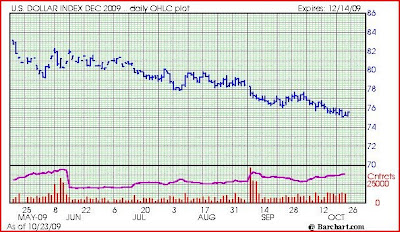 The dollar – gearing up for another megarally?
(Source: Barchart.com)
Open positions: