This Ain’t Your Grandpa’s Deflation…This Week in Commodities

Common wisdom holds that depressions are inherently deflationary.  The United States in the 1930’s.  Japan in the 1990’s and 2000’s.
Combine a depression with other deflationary factors going today in the US – demographics, deleveraging, falling asset prices, even productivity – and you’ve got some serious deflationary headwinds.
(As a side note – I’ve warmed to the view that gentle deflation, as a result of increasing productivity, is the optimal, and honest, situation that promotes both savings and economic growth.  It’s silly to label all deflation as “bad” or “evil”…how can deflation created by increased productivity be bad?  But I digress.)
Ben Bernanke, a student of the Great Depression, believes that the Depression could have been averted if deflation had been averted.
Determined not to repeat the mistakes of history – or what he thought were the mistakes of history – Bernanke took unprecendented measures…first, lowering interest rates as far as they would go…next, utterly trashing the Fed’s balance sheet…and finally, when all else failed, he cranked up the printing presses.
Printing money always leads to inflation…in fact, printing money…or quantitative easing…is inflation.  Rising prices – which follow – are the symptoms of inflation.
But what if you just print the money “for a little while”?  That’s right – print it up, float it out there to keep the economy from grinding to a halt – and then when things are moving again, start to pull it back in.
Doesn’t it sound insane?
Well, this is what is being tried.  And as hyperinflationary as this sounds, even the most fervent inflation hounds believe it will be a year or two or three before we start to see inflation creeping into the system.
Too much credit was destroyed, the velocity of money slowed down too much…logical reasoning dictated that it would take the Fed time to print enough to make up the gap…even at the rapid rate in which they were printing.
Then a funny thing happend while we were chilling out, getting comfortable, and generally not worrying about inflation – commodity prices started to move up.  The dollar started to drop.  Bond yields started to climb.
Falling Dollar, Rising Bond Yields = An “Uh Oh” Sandwich
Remember when every investor in the world was worried about the dollar’s poor fundamentals?  McDonald’s was poking fun at the dollar in it’s commercials…music videos were flashing euros…supermodel Gisele Bundchen asked to be paid in euros rather than dollars.
That marked a bottom – at least a short term bottom – in the dollar.  Everyone was on the same side of the trade – short the US dollar.
When world financial markets collapsed, a global “flight to safety” and massive short covering propelled the dollar up, up, and up.
For awhile, nobody worried about the dollar’s fundamentals…at least in the short term.  The Fed’s printing money?  Hey, no problem, the dollar’s still the world’s reserve currency.  Besides, other countries are printing money too.  Why worry?
In the meantime, the dollar quiety began to slide…and the dollar index is now sitting at its low point for 2009: 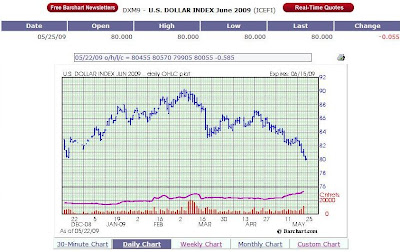 It’s a quiet race to get rid of US dollars once again.
(Source: Barchart.com)
Makes you wonder if currency fundamentals do, in fact, still matter…if printing money is indeed bearish for the value of the currency being printed.
Meanwhile, what has The Fed been doing with it’s newly printed dollars?  It’s been buying long dated US Treasuries to keep yields down!
Nobody else is buying this trash, so it’s up to our printing presses to pick up the slack.  The Fed announced this “newly printed cash for trash” program last December – when yields on the 10 and 30 year bonds were dropping, and deflation was king.
Common wisdom held that deflation, combined with these “monetization purchases” by The Fed, would continue to drive rates down…possibly all the way to zero.
But a funny thing happened on the way to Japan…rates bottomed on December 18, 2008, and have been climbing ever since!  Long dated Treasuries have been slammed throughout the first half of 2009! 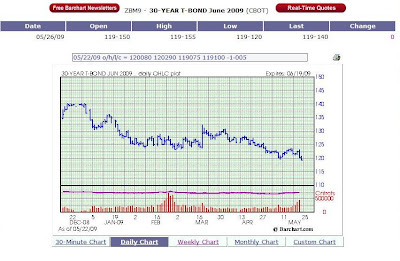 30-Year Treasuries are not behaving like we’re in a deflationary environment
(Source: Barchart.com)
Uh oh…this is not good.  What a Fed to do?
If they let interest rates rise – that will surely squash whatever is left of the US consumer.  Green shoots turn into marajuana buds – game over.
But the only way to prevent interest rates from rising in the near term (short of cutting government debt, which we know is not going to happen) – is to step up their purchase of long term bonds.
So applying a little game theory to the Fed’s current hand – we have to expect them to sacrifice the dollar.
The twist, I believe, is that the dollar could get trashed quite soon.  So I would strongly advise you to take a hard look at your savings and investments – right now.
Charts don’t lie.  No matter what our personal beliefs or biases are about the future, no matter what we think is going happen – we have to defer to what the markets are telling us.  And right now, the markets are starting to say “uh oh.”
It could be a breathtaking move out of the dollar – it’s value could feasibly get trashed in a matter of weeks, days, or even hours.  Don’t be the one left holding the “Old Maid” card as the rest of the world runs for the exits.
In Case You Missed It…This Week’s 5 Most Popular Posts…
Positions Update – Back in the High Life Again!
What a week put by the Aussie…while the USD tanked, the A$ soared – moving up over 3.5 cents in one week!
I believe the Australian dollar could continue to rally further from here, and will be holding this position until we see a change in the trend.  Because we know that the trend is our friend!
OJ was down slightly on the week…some rain in Florida to snap the drought.  Prices held strong though…they could be consolidating before the next move higher.  We’re still at fairly cheap prices on OJ, so there is room on the upside.
Not to cry over spilt milk – or in this case, spilt sugar – but I should not have “taken profits” in my sugar positions last week.  Just goes to show that when the trend is on your side, you don’t sell and wait for a pullback…because it may never come!
Shame on me, and now I sit on the sidelines, waiting for a further breakout to the upside to reinitiate this position.
Finally with a little dry powder sitting around, I decided to “punt” on a Mini Soybeans contract on Friday.  Beans have been extremely strong, driven by demand from…you guessed it…China.  The soybean complex is a favorite of the Chinese – more so than corn and wheat – and as a result, beans have leading the pack as far as the grains go. 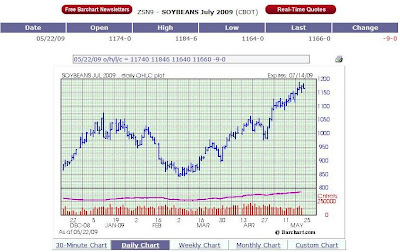 Soybeans are on the move, driven by Chinese demand.
(Source: Barchart.com)